posted on Jun, 12 2015 @ 11:16 AM
link
Zimbabwe is ditching their currency in favor of US dollars, i would pay 50 cents for one of those 100 trillion dollars bills if you happen to have a few, that thousands of times higher that the official rate don't waste the opportunity 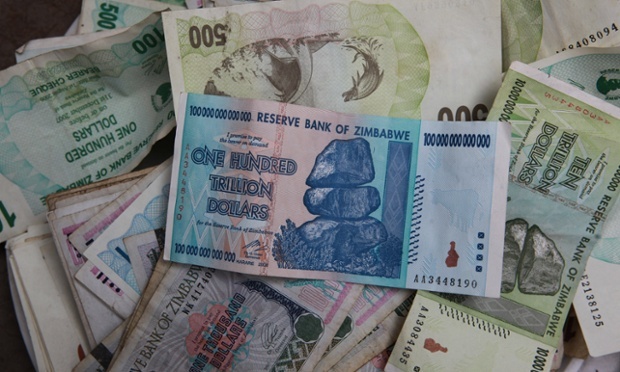 Zimbabweans will start exchanging “quadrillions” of local dollars for a few US dollars next week as President Robert Mugabe’s government discards its virtually worthless national currency.

The southern African country started using foreign currencies including the US dollar and South African rand in 2009 after the Zimbabwean dollar was ruined by hyperinflation, which hit 500 billion per cent in 2008.

At the height of the country’s economic crisis, Zimbabweans had to carry plastic bags bulging with banknotes to buy basic goods. Prices were rising at least twice a day.

From Monday, customers who held Zimbabwean dollar accounts before March 2009 can approach their banks to convert their balance into US dollars, the governor of the Reserve Bank of Zimbabwe, John Mangudya, said in a statement.

Ecuador did this 15 or so years ago, it went well for them, when you cannot print your own bills it seems you have to be more cautious on how you spend your money, dollarization however is a double edge sword, some people think that Spain could have spare most of their economic trouble if they had a coin of their own to devaluate, giving them more flexibility, risking reaching hyperinflation as Zimbabwe if you are not careful with how much you print.

In the end the highest trouble of this is the lost of a powerful symbol of national identity, you are surrendering to the empire, a measure like this could stabilize economies like Venezuela, but the political cost of doing so will never allow the regime to take such action.

In the long run Zimbabwe will have a chance to fix some of their problems by doing this, but the immediate road will be hard.

If all the African countries done the same, think of the benefit to America....I mean the Fed...to keep it going.....
Ah never mind lol

posted on Jun, 12 2015 @ 11:38 AM
link
I bought some a few years ago for Christmas presents. It's a better exchange rate than the government is offering. Maybe the public in Zimbabwe should start selling it as a novelty?

That page is strongly overpriced

In the long run Zimbabwe will have a chance to fix some of their problems by doing this, but the immediate road will be hard.

Getting rid of the clown in charge would be a good start-He has been driving that nation into the ground for far too long.

Sadly it's par for the course in many African nations.

Of course, who would think they're all being paid off by the central banking cartels?

It's all coming down soon...

To be fair, pretty much no one uses the old Zimbabwean currency anyway. They've been using & accepting US Dollars, Euros, and other global currencies because of the ridiculous crash & inflation of the Zimbabwean currency. So this is basically a way to make this official & clear out languishing bank accounts.

The article I saw about this a few days ago said they were starting with bank accounts of a certain amount first. And I think there was a limit on which denominations they were going to exchange (like the smallest denominations weren't eligible).

I knew my Dinar would be worth money one day!

posted on Jun, 12 2015 @ 05:28 PM
link
This is why we'll all be using cryptocurrency in ten years, this printed money crap is just ridiculous.

50,000,000,000,000,000 is insane, but what's even more insane is the printing of so much extra USD that, in that same ten years time, in all these other countries not just here, USD isn't going to be worth that much, specially if anyone ever did a census on it all.

Actually that would most likely be the dollar's downfall, a census of all currency in circulation, forcing the usage of a new currency.

But you have ten years, since rest of the world needs to hop online 1st that aren't creating a huge need for faster transfers and less fees.

edit on 12-6-2015 by Tranceopticalinclined because: (no reason given)

It is the future awaiting USD