I found this story to be quite interesting. It made me think of some of the secret missions that my father did for the CIA back in the 60's. He didn't like to talk about them either. He only told me about one of them one day because I was unexpectedly dragged into a related situation some 30 years later. Regardless, he never told me any details. Simply said "those are the things that daddies don't tell their little girls."

I first thought I smelt a Brian Dennehy here but upon investigation seems to be legit.

Wasn't this the same survival expert caught in a warm, comfy hotel room and not sleeping in a tree in the remotest parts of B.F.E. as was told?

He is quite the fabulist, that one.

Yeah, because he was filming a TV SHOW

posted on May, 31 2015 @ 10:58 PM
link
I have a friend who's grandfather always said that he was the "closest thing to James Bond you can imagine" working in World War 2 for OSS.

He said he was a sniper, and that he "had Hitler in his sights at least half a dozen times waiting for the order to shoot that never came". We put it down to the ramblings of a crazy old man, until he was mentioned in a book on the history of OSS.

I also had a great aunt that worked at Bletchley Park with Alan Turing. What she did is under a "forever" publication ban (all we know is that she considered Turing a very close personal friend), but when she died, the Royal Navy sent out a full frigate with officers in dress whites and a full power gun salute for a burial at sea, just on the basis of my mother calling them saying she'd died and had requested a funeral at sea.

Our grand parents' generation did things that I'm sure would amaze us if we really knew what they were.

Yep they finally figured out Hitlers routine radioed London for the go ahead and were told to abort; the intel guys in charge figured that with Hitler dead a Manstein,Rommel,Hoth or some other competent commander might take over, thus at least making the war last a lot longer.

The guy who played Saruman, Christopher Lee also was involved in such clandestine actions during World War 2.


I was attached to the SAS from time to time but we are forbidden – former, present, or future – to discuss any specific operations. Let's just say I was in Special Forces and leave it at that. People can read in to that what they like.[70]

A TV show about how to survive in deadly situations. His shows were showing survival techniques while the survivalist was busying himself on a kingsized bed and sipping from the mini bar! Roughing it.

Your attempt to detract from his countless examples otherwise fails to impress.

This happened on a singular occasion and Bear Grylls apologized for it.

Or have you been butt hurt that badly by it, you've sworn off television completely???

I think not red herring.

What does that have to do with this thread? Yes Grylls faked parts of his show. But that has absolutely nothing to do with his grandfather hustling Nazi scientists out of Germany.

Of course, he lost all credibility with me the first time he drank urine on air.

Then he should quit doing it.

Everyone has lied. I have lied. You have lied. It does not mean that everything we say following the lie is a lie also.

On topic, I find it interesting as I didn't know (though I guess it should be obvious) that Britain took in Nazi scientists along with the US and Russia. I still am baffled as to how anyone can think that evil can be for the greater good.

I love war stories like this about the secret of the secret clandestine units and this seems to be one of them.

I also think its cool that Ian Fleming may have been behind the whole thing.

I have been fortunate enough to work with our war time generation and some of the stories they have to tell are truly amazing, one guy I talked to was in Polish Special forces running attacks inside Germany to make it look the Russians and then doing the same thing only to the Russians. He was pretty amazing, we only found out about his military back ground because he started tapping in Morse code.

posted on Jun, 1 2015 @ 05:03 AM
link
a reply to: CIAGypsy
Wow something from Bear Grylls does not involved him drinking his own piss

Not as interesting but my Grandmother was a officer in the RAF. Worked in the underground bunkers under London. Like yours she is under a Official secrets act for life but what she did say was she worked in the main HQ that was used in the battle of Britain were Churchill and the King watched everything unfold. She had access to a lot of the allies secrets but she will take them to her grave.


Of course, he lost all credibility with me the first time he drank urine on air. 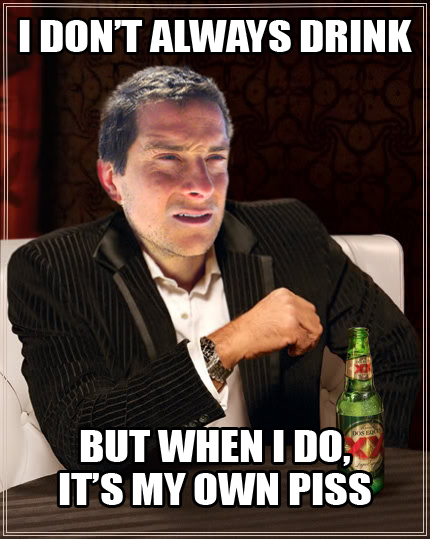 posted on Jun, 1 2015 @ 05:13 AM
link
He always throws up everything he attempts to eat.
Anyone see him drink from the camel intestines? then threw up making his whole situation worst.
He is no Ray mears.

originally posted by: boymonkey74
He always throws up everything he attempts to eat.
Anyone see him drink from the camel intestines? then threw up making his whole situation worst.
He is no Ray mears.


yeah first rule of being dehydrated