2,400-year-old ‘bongs’ used by kings to smoke cannabis and opium are dug up in Russia 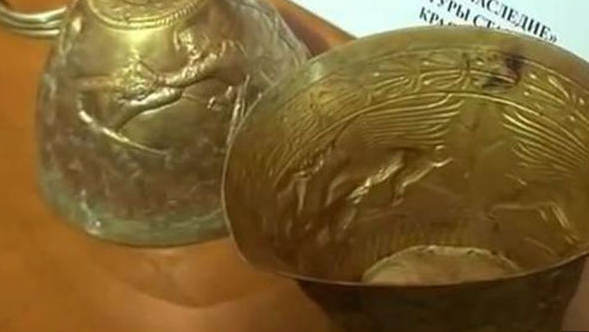 Two ‘bongs’ which were used by tribal chiefs to get high have been discovered in Russia.
But rather than the cheap plastic things teenagers buy down the market, these bongs are made of solid gold.
Archaeologists found thick black residue in the bongs, and determined that they were used to smoke cannabis and opium in a ceremonial setting.
It is thought the impressive implements belonged to the Scythians, a nomadic warrior race who ruled large swathes of Europe and Asia between the 9th century BC and the 4th century AD.
This mean the bongs could be 2,400-years-old, making them some of the oldest in existence.

Who smokes weed before heading into battle??.. sounds counter productive , slows you down relaxes you make you wanna chill, I say getting drunk or some other kind of stimulant would have done a better job smoking weed would seem like a post battle activity to me..maybe that's why there are no Scythians??
edit on 31-5-2015 by Spider879 because: (no reason given)

But in terms of historical information obtained from this discovery, it does add valuable data to the history of cannabis use.
edit on 31-5-2015 by Aleister because: (no reason given)
edit on 5/31/2015 by Blaine91555 because: Snipped resonse to off topic post.

i) Narcotics and illicit mind-altering substances, legal or otherwise: discussing personal use or personal experiences as the result of such substances is not allowed in any form.