The City of Paradise Valley has added cactus with cameras in them over the past few days, but residents have no idea why, and the city doesn't want to talk about them.

About two dozen fake cactus already serve as cover for cell towers, but some people were alarmed to see cameras being place in cactus around town.

While town leaders didn't initially want to talk with us about the cameras, we did end up getting some explanation.

*****
Residents are now curious what the cameras will be used for.


Very interesting, I would be curious as well. Eventually, they got a response from officials.

FOX 10 asked Paradise Valley Police about the cameras, but they said they were not prepared to make a statement at this time. At City Hall people were also hesitant to talk with FOX 10 about the cameras, saying they wanted to wait until all the cameras were installed, but eventually the Town Manager answered some of the questions.

Burke says the cameras run license plates of cars against a hot list database. If the car is stolen, or the subject of an amber alert, the police will be notified.


The question I have, as I have not done the search myself yet, is: did Paradise Valley issued public notices about this activity? They do seem to have a history of acting on their own though it seems.


FOX 10 did a story in February about the same technology being installed on traffic lights, the city also declined to talk publicly then too.

So why is the city not being public about this?

"Again, not trying to hide anything, the police department, this was my request of before we get going at these one at a time, lets get them all together and make sure we understand and everybody is on the same page," he said.

Burke said the cameras are not active at this point.

Some would say they should have been vetted before they went up.

"It probably is fair, this is technology, we're always learning about it, and so every time you think you've got it covered someone brings up a new idea," he said.

Burke said the cameras are not being put in fake cactus to be secretive, but because there are no light poles in the area to put them on. He says they're trying to make the cameras aesthetically pleasing. It's all part of a $2 million police technology upgrade the council passed last year.


We always here not active at this point as they await rules and regulations on data retention and I don't always buy it. However, not trying to be secret my butt; "get going at these one at a time, lets get them all together."

The whole story translates to: While we just decided to put these up all of a sudden without public debate, as we have done with licences plate readers, we are not trying to hide anything or are being secretive, we are just waiting until we have the infrastructure to merge real-time 24/7 tracking and surveillance technologies such as our license plate readers, high-resolution cameras with facial recognition, and we are working with local businesses and select private individuals in integration of personal security cameras, combined with our Intelistreet plan later in the year ... but, they are not active at this time, no worries folks. 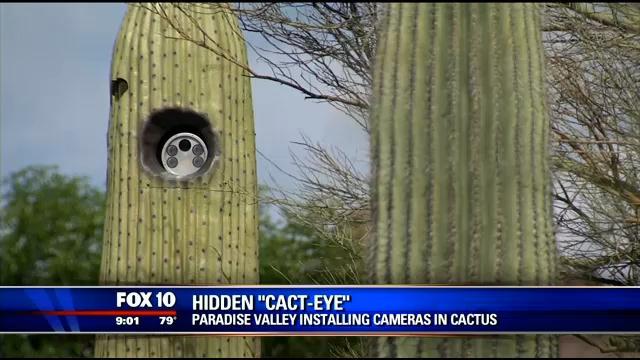 We'll see if we hear anything more on this story.


edit on 5/8/2015 by AllSourceIntel because: Spelling and structure

Burke said the cameras are not being put in fake cactus to be secretive, but because there are no light poles in the area to put them on.

You have a street dept that could install a simple pole in no time at all and at little expense, but you go for hidden cameras.

posted on May, 8 2015 @ 08:11 AM
link
Just try doing your own private property "upgrades" without notifying city and county planners and executives, and when the codes enforcement rookies show up, just tell them you weren't being secretive, but were just trying to make your land more "aesthetically pleasing" (Look at all the excuses they use hoping to make the public eye look away from them).

See if they just leave without throwing big fines at you.

This is what happens when people become authoritative, they begin the long process of exponential abuse of power.

posted on May, 8 2015 @ 11:13 AM
link
Total BS. Nobody would spend $2 million installing stuff without first investigating whether or not they can use the collected data legally. This was a long, long time in the making.

Was the whole "we're not trying to be secretive" but "don't want to talk about it" lie supposed to fly at all?

As for use, you can bet that they are only mentioning the sugar coated things you find at the end of the rainbow like stolen cars and amber alerts. Especially when they are being hush, hush about it.

Since when was it right for cities to start acting like the NSA?