Cancerous fish? If this isn't a sign of man's affect on the environment then I don't know what is. What says ATS?

is it not beyond comprehension that a fish would have cancer. i'v e been aware of this for a while.
here is a article from 2009.

it says that there are probably two things that cause or are suspected to cause cancer in fish and animals.
pollution and viruses.

posted on May, 7 2015 @ 08:53 AM
link
a reply to: lostbook
I had never thought about fish with cancer. I googled it and it appears that many different species (including sharks) can indeed get cancer! Weird. Thanks for bringing this to my attention.


cancer in fish is probably just as common as with people, common tank fish can get it, and even sharks, although most people have heard the "sharks don't get cancer!" nonsense.

posted on May, 7 2015 @ 09:26 AM
link
There were tumors on fish in the copper country, caused by mining they say. They used the angiogenesis caused by copper tailings from the copper mines to evaluate the reason behind the cancerous growths. I fished a lot in the area and only found the tumors in a couple of places, the places near where the sewer plants let their discharge into Portage lake. They spent a lot of money covering up small areas of the mining sands to reduce the copper and abandoned the super fund spending because they could not get it much better as there were a lot of the tailings from mining operations dumped into the lakes up there.

Sewer plants are not designed to neutralize all chemistry. The meds we pee out are not all removed from the wastewater, the plants are not designed to do that. The chemicals we use in our daily use are not all detoxified. But the regulations governing the sewer discharge do not examine everything, the parameters do not include testing for many things.

I caught around three northern pikes with big growths on them and some perch and other kinds of fish. I just quit fishing in those areas which actually were by the sewer plants.
edit on 7-5-2015 by rickymouse because: (no reason given)

posted on May, 7 2015 @ 09:29 AM
link
There have been warnings about the fish in PA for YEARS!
The Mon River & Ohio river have been non-edible for years, it's taken them forever to get the Allegheny River sort of cleaned up. The Fish Commission puts out warnings every year where it's only catch & release due to the fish not being safe to eat.

Everyone here pretty much knows you only fish the upper Allegheny if you plan on catching anything worth eating.

originally posted by: hounddoghowlie
it says that there are probably two things that cause or are suspected to cause cancer in fish and animals.
pollution and viruses.


So it's safe to say that viruses can cause cancer in humans too. Which means an individual would be rather off never getting a certain virus than getting the vaccine which contains the virus.

Vaccines gives us a particular protection while slightly weakening the rest of our immune system, at least that's what I believe.

Back on subject, with everything we dump in our waters, I'm not surprised to see fishes with cancers!

Heavy metals too and while this is isn't new it makes sense to pay attention to.

The other side of the coin is that everything has cancer and always has. Immune systems typically keep it in check but, not always or forever, it is just the nature of being made out of meat.

posted on May, 7 2015 @ 02:09 PM
link
I have a rather extensive handbook of fish diseases that helps you diagnose and treat where possible, and tumor/cancer is one of the possibilities for fish.

All it takes for an organism to get cancer is for something to cause abnormal cellular division which means a mutation in the cell. Lots of things can cause that, even just a mistake in cellular division associated with age. 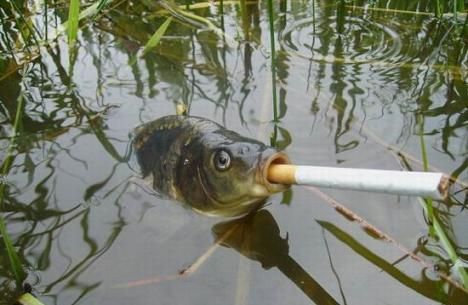 Anything can get cancer.

posted on May, 8 2015 @ 06:44 AM
link
I was at Longwood Gardens in Kennett Square last weekend and saw a fish that had obvious tumors on its back just behind the dorsal fin but before the tail.