posted on Apr, 22 2015 @ 02:27 AM
link
Just watched a fascinating video from the BBC which talked about this 'BLOB' in the Pacific off the west coast of America.

This then got me thinking about how the Jet Stream has not only been affecting the Eastern American coast but also the effects recently in Europe and more further afield over India and then the dramatic storm over Sydney and the NW territory in the past day or so......

Are they all linked..?
What has caused the BLoB in the Pacific .?
Remnants from Fukishima disaster .?

posted on Apr, 22 2015 @ 02:34 AM
link
Damn, with a title like that I was expecting some strange sci/fi type water creature or something. LOL

Maybe the ocean floor has heated up a bit?.
Great find dude.

Yes the Jet stream and air temperatures, high and low pressure systems water temperatures are all linked.
No the remnants of fukushima would not pile up in one spot with enough energy to make a "blob" of warmer waters. The energy level of even the insane amount of nuclear waste at fukushima is Nothing in an ocean.


It's odd that I am just now hearing about this. Seems odd.. I wonder if it's some natural pattern? The west is obviously already desert like. And if it is some natural pattern one would expect evidence of colder temperatures/more ice on the east coast coinciding at the same time that california is dry. Is there a history to these things?

originally posted by: boymonkey74
a reply to: PurpleDog UK

Maybe the ocean floor has heated up a bit?.
Great find dude.


Not sure how that slipped my mind.
Any known volcanic activity?

There does seem to be a patch of much warmer water.. I wish there were way more measuring stations.. I can't tell with just the few they have what's going on.. Still looking for more info

posted on Apr, 22 2015 @ 02:58 AM
link
It would appear to me that something in 'the system' has changed........ The Jet Stream, 6 miles up in the atmosphere would appear to be being affected or affecting weather and pressure below which then has a direct impact on the land and seas beneath....
Living in Ireland now there are multiple reports of basking sharks around Irish and SW waters which are early.....couple this with the unusual jellyfish blooms in the Irish Sea too and it points to a warming of the sea temps around the UK and Ireland.
There were significant storms a month or two again in mainland Europe and a very perculiar weather pattern only last week over the UK - weather a cold pressure 'lump' was caught and circulated 360 deg around a high pressure centre......

Maybe Fukishima is far fetched however the BLOB in the Pacific is centred off the west American coast and so surely has something to do with the land and sea......

This article from 1991 is ridiculously close to what's going on now in california..
So this current drought.. It's actually creepy reading this article... It's like it's now.. I keep looking back at the date and it says 1991... But huh.. Lol..

As California faces what may be the most economically devastating drought in its history, water deliveries to some farming areas have been suspended and water rationing imposed in selected areas.

...efforts to combat it are pathetically puny, mostly attempts to wring a bit more snow out of clouds as they cross the mountains.

At least 15 agencies are seeding clouds, when the right kinds come by, trying to add a little snow above the reservoirs that collect the spring runoff and send water through giant aqueducts to Southern California.

"Most of the effort is in the high Sierra with the goal of augmenting snowfall by seeding storms that naturally would be rather inefficient,'' said Maurice Roos of the state's department of water resources. "They may be increasing snowfall by several percent.''


The immediate cause of the California drought is persistent areas of high pressure over the West Coast or offshore in the Eastern Pacific Ocean.


And for anyone confused about those terrible words "climate change" and "global warming"
They are being used as a scam with the carbon credit idea.. Which is why I won't go near them, but...
Increase the total energy on earth, well.. You will get more variation.

Things are looking bad, and you can see why a government would plan for tribes of people migrating to new cities..
edit on 22-4-2015 by KnightLight because: (no reason given)

posted on Apr, 22 2015 @ 03:14 AM
link
I think it is becoming clear that California is completely unsustainable when it comes to water resources and the current expectations of its inhabitants.....
We are all in some way going to have to accept change and become more flexible with our environment.....

originally posted by: PurpleDog UK
I think it is becoming clear that California is completely unsustainable when it comes to water resources and the current expectations of its inhabitants.....
We are all in some way going to have to accept change and become more flexible with our environment.....


That would mean leaving California.. Or living like the Navajo.

though from the same article I quoted above..


Although University of Arizona studies have found 20-year dry spells, they were invariably interrupted by occasional wet years. The longest string of consecutive dry years was six, from 1843 through 1848, Meko said.

In the absence of scientific explanations, the reassurance from the tree-ring record that in four centuries no drought has continued more than six years may be the only hopeful note there is.

The worry from that piece for me would be the 40 years of limited rain and low moisture......isn't the snow in the mountains only 5% as we speak...?
I think there are big problems ahead for California......... And possibly the global effect of that change too...!

It's BAD.. It's so bad it's basically unheard of.

"Nearly a third of our SNOTEL sites in the Cascades and Sierra Nevada are reporting the lowest snowpack ever measured,"


In Western states where snowmelt accounts for the majority of seasonal water supply, information about snowpack serves as an indicator of future water availability.


If I lived in the desert I would be stockpiling as much water as I could drink for however long that water would last..

posted on Apr, 22 2015 @ 04:06 AM
link
Its weird, Israel makes like 40% of its water from desalinization, China is making huge desalinization plants that will be finished by the end of the decade, the cost of these plants goes from 0.5-2$ per ton of water and the price from taking Colorado river water to California is 2.5 per ton.

Why US dint do things like this to prevent what is happening now? its not news that California is an arid place prone to drought.

Sometimes it feels democracy hurts more in the long term, too many people caring over their own interests don't allow things to be done for the greater good, but ruthless governments as Israel and China just make their choices without having to hear to everyone, they mess with the life of many, but in the long turn their country get stronger, democracy don't do things in order to prevent hurting anyone, but this inaction affects the most in the long run.

posted on Apr, 22 2015 @ 04:53 AM
link
Wouldnt happen to be anywhere near this peculiar underwater feature would it? 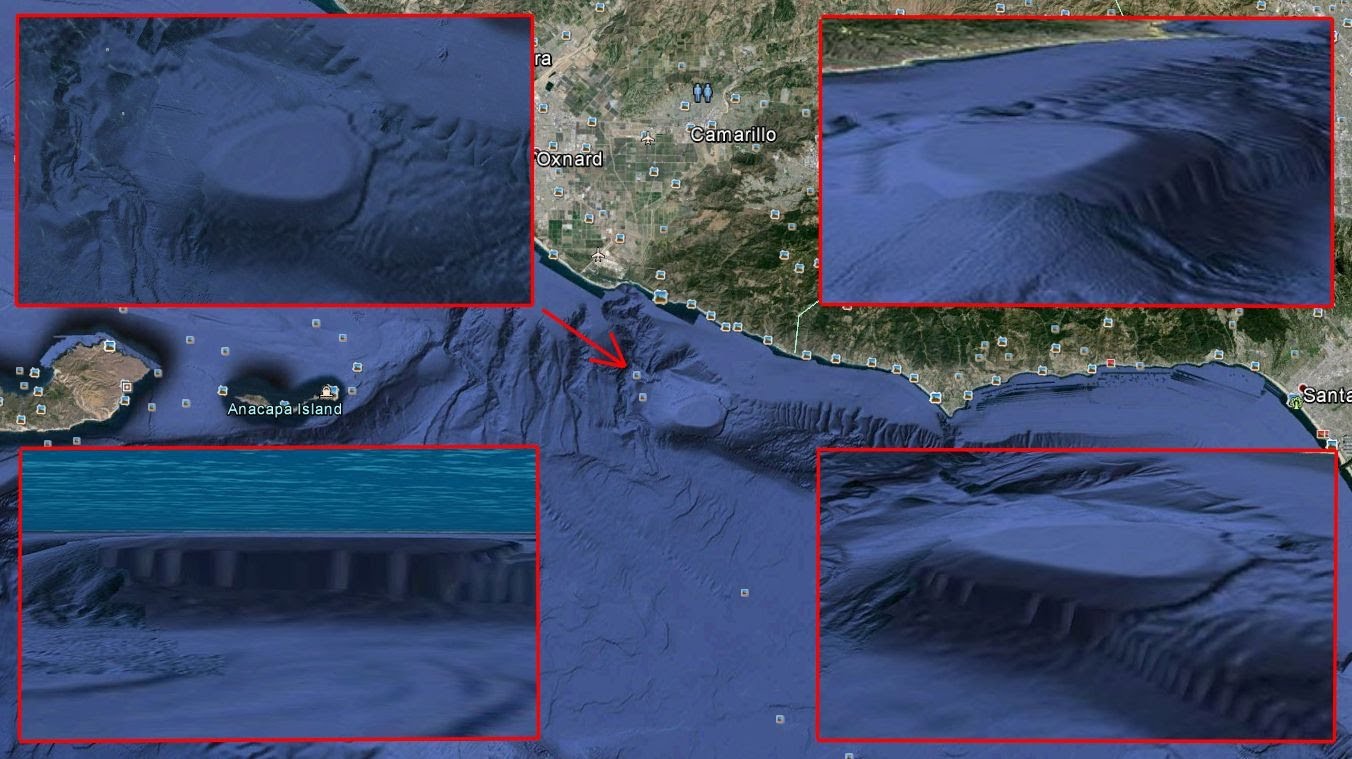 This first showed up on satellite in August 2013 and has since extended.......although rather than extended it would be accurate to say it has developed into 3 separate blobs (Gulf of Alaska, Barents Sea and Southern California, separated by a cold patch - Pacific North West Coast).

Mystery blob in Pacific messes up US weather and ecosystems

There are actually quite a lot of sources for info on this "blob" but no one really seems sure of the cause or whether it is short or long term at the moment. Even the climate doom mongers are not saying this is because of AGW at this stage - they simply don't know if it is part of a long term pattern or something else entirely. They are also indicating it is responsible for a lot of the bird and sea lion die off seen in the US over the past couple of years.

originally posted by: PLAYERONE01
Wouldnt happen to be anywhere near this peculiar underwater feature would it?

No idea where that is (no indicators in your pic i can make out) but that looks like an oceanic volcano (or the remnants of one).

posted on Apr, 22 2015 @ 05:24 AM
link
I was reading a good thread over at WUWT on the subject . It is a strange thing and it's hard to say why it actually happens .It's only in modern times with the different means to measure such a thing that we know about it .It could be where the missing heat is but why there ?

This post provides an update of the unusual warming event in the sea surfaces of the eastern extratropical North Pacific…what is now regularly called “The Blob”. It does not appear to be ready to depart anytime soon. See the sea surface temperature anomaly map in Figure 1 for the location of The Blob


originally posted by: PLAYERONE01
Wouldnt happen to be anywhere near this peculiar underwater feature would it?

No idea where that is (no indicators in your pic i can make out) but that looks like an oceanic volcano (or the remnants of one).

6 miles off the coast of Point Dume in Malibu, California

Thanks for that extra info. It makes me more sure is tectonic in origin and therefore looks like an almost stereotypical guyot.