posted on Mar, 24 2015 @ 10:16 AM
link
The RAF Voyager tanker that went into a nosedive last year was out of the pilots control for 33 seconds. The mishap started after the pilot used his camera to take a picture out the cockpit windows. He set the camera down beside his seat, and just over 3 minutes later, moved his seat forward. This pushed his camera into his sidestick controller, putting the aircraft into a 17 degree nose low attitude.

The pilot was unable to pull back on the stick due to the blockage caused by the camera. The copilot, who wins the badass of the year award, was in the forward galley at the time the incident started. The report has this to say:

The co-pilot, who had been in the forward galley area for around 15min, attempted to return to his seat – although he was weightless, as the cabin encountered a maximum of -0.56g. “With his feet on the flight deck roof, the co-pilot reached down and attempted to disengage the autopilot by pulling back on his sidestick,” the report says.

When the copilot pulled back on his controller, it caused a dual input condition, which engaged the aircraft protection system. This provided the initial recovery from the nose low attitude.

The crew then went on to refuse offers of a diversion to an airport 60 nm away, requesting Istanbul instead, which was 500 miles away, and wound up landing at Incirlik, 340 miles away. Despite having possible damage from the incident.

There is going to be a modification written in SOP about cameras now.

"At this point in time, the flight crew would like to apologize all passengers for the short period of zero-gravity that they encountered several minutes ago. Just as soon as the cabin crew have put on fresh uniforms, they will be coming round to help passengers clean up any food or drink that they might have spilled on the ceiling."

Side stick controllers work quite well. This was nothing but pilot error.

Side stick controllers work quite well. This was nothing but pilot error.

That's the point of bad ergonomics: bad design tempting "pilot error". An altimeter readout in the lavatory works quite well too for some definition of "works", making any operating problem "pilot error".

A critical flight component not easily visible to both pilots and easily mechanically jammed. Would it happen with a linked center stick with clear mechanical & intuitive feedback? No: it would first be very difficult to accidentally jam, and if it had, the phenomenon would be immediately visible to both and rectified at once.

Air France mid-ocean crash: in a stressful situation the position of the control sticks are not immediately visible to both and dual input not recognized.

And planes have been flying with stick controls for decades, with the number of accidents it MIGHT have played a role in being single digits.

And planes have been flying with stick controls for decades, with the number of accidents it MIGHT have played a role in being single digits.

And? This ergonomic problem was previously solved and then un-solved.

There are many other major new ones to address I'm sure with all the cognitive complexity of communication, navigation and automation.

So you think they should completely redesign the control system because of a tiny handful of accidents? One of which was caused by human error.

posted on Mar, 25 2015 @ 11:53 PM
link
Zaphod you are correct, this happened not because of design flaws in the A-330 cockpit layout and specifically its side-stick controllers but because the Voyagers flight crew and especially its command pilot were clowns. Blaming the tool and not the operator(s) just smacks of yet another case of Airbus bashing. I have extensive experience in both Boeing and Airbus aircraft and therefore their cockpit layouts, and I used to be a "Boeing always" man. I recognize that there are flaws in Airbus design here and there but on the whole I find their thinking, safety and layout to be superior to Seattle's. And especially in the cockpit. The Military Aviation Authority (MAA) report points out that in over 190 million hours of combined operation across the Airbus family from A320 to A380 that have this layout, there is no other report of something like this ever happening.

What DID cause this was a total failure within the cockpit and a cultural and operational procedure flaw that needs addressing. First, why did the pilot stick his camera between the side-stick armrest and the side-stick controller? That is no better or worse than a pilot in a 747 deciding to stick his flight bag or other object between the yoke column and front edge of the seat pan. There is plenty of space to the left of the pilot for him to rest his camera down. You just dont do dumb things like that. Conclusion? He was just plain stupid. Second, A330 cockpit seats are electrically powered with a mechanical backup. All that idiot needed to do was reach down beside his thigh and toggle the seat tracking switch aft an inch or so, he didn't even do that. On the issue of side-stick controllers and confusion about inputs, yes it can appear to be unclear about who is doing what but the failure here isn't the input device its the inability of the crew to conduct proper CRM and both communicate the desired input as well as use the Mark 1 eyeball to read their instruments. Generally speaking the instrument layout on Airbus's is better at doing that. You cant as mbkennel does blame the design if the pilots dont do their job. This isn't a conspiracy to blame pilots, its an example of what happens when you f**kup.

A mechanical linkage system is not better in terms of reliability other than giving you a force feedback. But there is a problem with this method as well. If for some reason the command pilot in the left seat has his column jammed or he slumps forward having passed out due to a medical problem (this HAS happened) the co-pilot is going to find it very difficult to counter the problem because in most designs a la the 747, the control column spring biasing always give force priority to the command pilot i.e. the left hand seat. In the Airbus model either side-stick can be given priority simply by selecting the "sidestick priority" switch on the glareshield, at which point an aural spoken warning will loudly announce either "priority left" or "priority right" in the cockpit. This is what the co-pilot should have done first in this incident instead of panicking and grabbing his stick (admittedly he had just "walked" across the ceiling to get there so his visual aspect was unusual to say the least). Further the fact that his action caused the aircraft to disengage the auto pilot and begin leveling off is testament to a safe design even after human pilots failed to do the correct procedure. A story on the report in Aviation Week contains the following comment of what the aircraft did as per the MAA report,
"The aircraft’s onboard self-protection systems overrode the stick input, with pitch-down protection activated 3 sec. after the pitch-down command was given, while high-speed protection was triggered 13 sec. after the event started as the aircraft passed through 330 kt. With the flight control system idling the engines, it recovered the dive to level flight." Av Week story

One might also question why the R/H seat was unoccupied for an extended period as some sources have suggested? Plus why after such a major incident with several dozen people on board injured and no idea if or how much damage the aircraft sustained did the pilot refuse the closest divert and instead pushed on for something like 500 miles? He also appears to have tried to mislead the investigation by verbally only suggesting in the post incident interview that there may have been a problem with the autopilot i.e. blame the machine and not the man. I'm sorry but this incident is a damning indictment of bad piloting and cockpit procedure rather than a bad aircraft design.

originally posted by: Grimpachi
a reply to: Zaphod58

There is going to be a modification written in SOP about cameras now.

actually...I doubt it. and the reason i doubt it is because the airlines and even the military is pushing for weight reduction and one of those methods is replacing the pubs with ipads, tablets, etc. So if they allow those then how are they going to stop a camera?


Lee nailed this one. Just plain stupidity on the pilot.

posted on Apr, 3 2015 @ 06:32 PM
link
Interesting article today about how Generation Clutter is creating a safety hazard in the cockpit. And not just on the Voyager tankers. Eleven months prior to this incident, it was noted that the C-130 fleet was seeing more and more personal items left in the cockpit at the end of the flying day.

It was thought that it was limited to the C-130 fleet, but a picture taken by the Mishap Pilot 6 minutes before they went into a dive proves that is not the case. 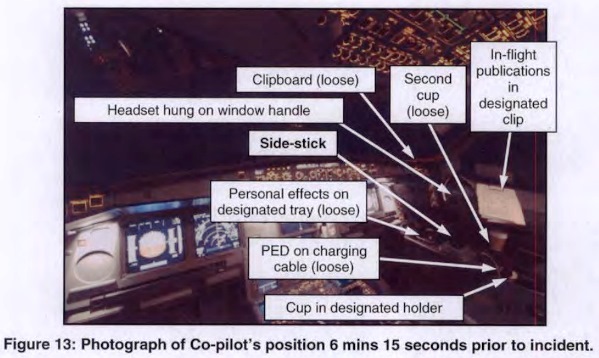 The picture is of the copilot position, and was used in the incident report. The report states that there was no official guidance on where to put items in the cockpit, so the crews developed their own policies and guidance. There were two other incidents after this one, but in neither incident did the aircraft deviate from its flight path. In one a folder slipped down beside the pilot and bumped the control stick, disconnecting the autopilot and causing a caution light to illuminate. In the other the pilots knee bumped the stick. Both aircraft immediately had the autopilot reconnected, without incident.