posted on Mar, 20 2015 @ 05:59 AM
link
now regarding ningirsu's zigg .i think many people fail to see the diff in the ranks among sumerian gods save for anu-->enki family of gods.there should be a class of gods we may call SUN gods-i.e those who shine as stars since there are a couple of gods in myths and legends specifically sumerian and egyptian gods .The like of Anu,Ashur/ahura,RA,Atum,Viracocha.In many texts these beings are described shinning bright as stars.

Then there are the half-gods i.e Apkallu n their descendants.Whereas they are described as being gracious n wise as their 'fathers' there stands out clear distinctions of their ranks with regards to abilities,duties dominion/jurisdiction,lastly Origins.

The sun gods do not answer to anyone for their 'mis-deeds'.
They do not ask for permission to punish wrong doers the half-gods have to consult the 'high ones'.
They do not have Geneaologies mostly becoz --they came into being of their own will!
Lastly the sun gods do not use ziggurats for a home or sacred barks/boats for travel to the abzu or elsewhere they are after all -beyond it.
Amongst the half gods(sumerian) there are ranks --i think the NO of wings makes for ranks 2,4,6.

As to ninurta's zigg do you mean a temple dedicated to him,or his house/palace?

with regards to ur old thread on the fish that swims there is a connection btwn glastonbury church--alton priors church--sarsen stones--whites horses--chalice well --arimathea joseph--knights--king arthur--'grail waters', give alton a look.perhaps even crop circles will come into the picture.

A wormhole is a structure that connects two points in space. The abyss can be seen as that structure. When a droplet falls into the ocean it becomes the ocean.


As to ninurta's zigg do you mean a temple dedicated to him,or his house/palace?

It's a good question, the E-nininnu Temple was very much a home for Ningirsu and his wife Bau, when it was completed Ningirsu and the other Anunnaki arrived to inspect it and the staff were formally presented to Ningirsu, for example his housekeeper looked after the E-Duga Ningirsu's bedchamber;

With his divine duties, namely to request; to command; to co-operate with the one speaking straightforwardly; to inform Nin-jirsu, the warrior sitting on a holy dais in the E-ninnu, Gudea introduced Cakkan, the wild ram, the minister of the E-duga, his servant to lord Nin-jirsu.

The bedchamber of his wife Bau were the E-mi quarters;

Bau´s going to her E-mi quarters was a true woman´s taking her house in hand. Her entering her bedroom was the Tigris at high water. When she sat down beside her bed she was the lady, the daughter of holy An, a green garden bearing fruit.

The Sumerians always related to their Deities in very familiar terms, another example is that the Temple was paid for by taxation levy upon the clan or family of the Goddess Nanse, and the clan of Ningirsu and clan of Inanna.

In essence the Sumerian Temple was the domicile and point of contact and influence between humanity and the resident Deity, but they took would take a notion such as the 'House of God' very literally. 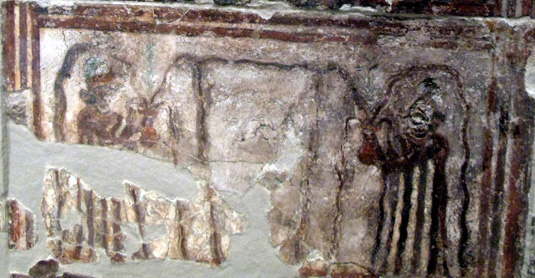 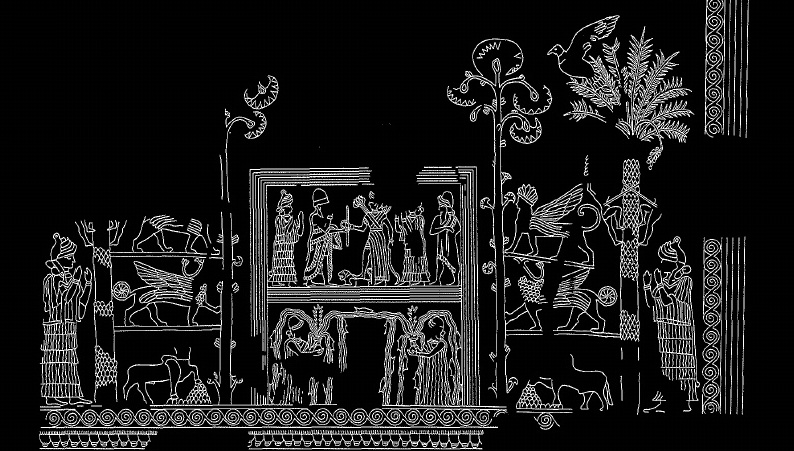 
separation and unity --both require passage of time i.e duration from one state to the other.Are u supposing time is an element since one cud argue the +1 is the observer(human consciousness).

i see a lot of parallels between ur nammu n ni'jrsu both reigned roughly 20-22 centuries ago,both were 'holy' warrior kings/gods both can be credited with building of some of the 'greatest' ziggurats.Whats the possibility they are the same guy.

posted on Mar, 20 2015 @ 10:25 AM
link
Ziggurats had to be located near the Rivers (both for religious and practical reasons) so I'd start by looking there, and keeping in mind the course-changes over thousands of years. Its probably something we think is just a mountain of dirt. They were sacred representations of mountains, after all!

What a long way we've come from Gudea, protecting orphans from the rich, to the modern governments protecting parliamentarians who kidnap children.


separation and unity --both require passage of time i.e duration from one state to the other.Are u supposing time is an element since one cud argue the +1 is the observer(human consciousness).

When the drop is separated from a body of water it passes through a space and experiences time.

When a drop is put into a body of water it is now both sides of the pond. When sepa-vaporated it moves through time to another part of the pond.

Did the pond experience that same distance and time like the drop did? The little fellow could have gone through hell...

But time is not what I was suggesting anyhow.

Space time can be bent with the relative awareness of self.


Space time can be bent with the relative awareness of self.

Do you mean projection as in -astral projection--where the observer becomes the phenomena ..i tried it once by slowing down the entry into dream state -- strange feeling like being in 2 places at the same time.In fact after that xperience i'm open to the idea that the soul/mer-ka-ba can manifesting a stargate to 'surf' hyperspace albeit at the non-causal information level.

But merged with waking reality. The bilocation effect could have been integrated into ancient societies and the monumental alignments and reconstructions on earth set it in stone, so to speak. I don't know what we think we are doing with IT this time round...

I think Ur-Nammu was a regular enough Sumerian ruler, the one you really ought to be watching out for is the very incarnation of the Goddess Bau, as in The Barmaid that became King of the World

In the case of Girsu i'm not so sure, certainly the main city Lagash would have been situated by a river but Girsu only ever seems to have been a religious complex and could have been founded upon a spring giving rise to the Abzu shrine.


monumental alignments and reconstructions on earth set it in stone, so to speak. I don't know what we think we are doing with IT this time round...

the same thing the ancients used it 4 ..to conquer fear by using a system of reality which is non-causal --where our fearful thoughts can not harm us directly n also it is a first step towards becoming pre-scients by anticipating more in less time.

Aside i noticed u av vested interest in ancient monuments ,i've read that the sarsen stones at Stonehenge were originally of blue color,the gyptian temple of solar works -->green .i wonder if u have come across ref to other monuments where color was of importance.let me know if~.

Pink granite in the great pyramid? Or did you mean in uk?
edit on 20-3-2015 by Wifibrains because: (no reason given)

Ever heard of St.Brigit of killdare ,n the colored book (book of killdare) appears written by angels.I think the book is one of the 12 tablets~~perhaps the book responsible for the symbolism assoc with statue of liberty.Also she's a strange one.i wonder if she's the same st.brigit of the celtic legends ~about angels who came to the earth with a sword of light.

Yea I've heard of the book of Kells and bridget. The main guardian spirit/goddess over the wells of the british isles who was later absorbed into Christianity.

There is a thread on the book of Kells by beansidhe on ats, the artwork seemed to depict shamanic journey or psychedelic experiences. The goddess was said to facilitate journeys to the other/underworld. Where the wells hangouts for witches and their "magic potions" or was there something holy in the water?...

posted on Mar, 20 2015 @ 02:08 PM
link
a reply to: Wifibrains
The older brigit of the irish brigit tuatha is said to use the powerful sword to 'LIGHT UP' the world which was dark n full of dark monstrosities.She even used it to 'calm the seas' its highly unlikely she was an evil witch unless one looks at it from the perspective of the 'foul creatures that lived in the darkness of the world.i'll dig ip in my archives to see if i can get that legend/story for u.

posted on Mar, 27 2015 @ 02:44 PM
link
So was the ziggurat a house or ceremonial platform? The seven levels seem to be prelavent in the mesoamerican seven chanbered cave system underneath the pyramid, also paralleling many aspects of mesopatimian and idus valley traditions of ritual and sacrel kingship traditions...