Had my cats eye removed 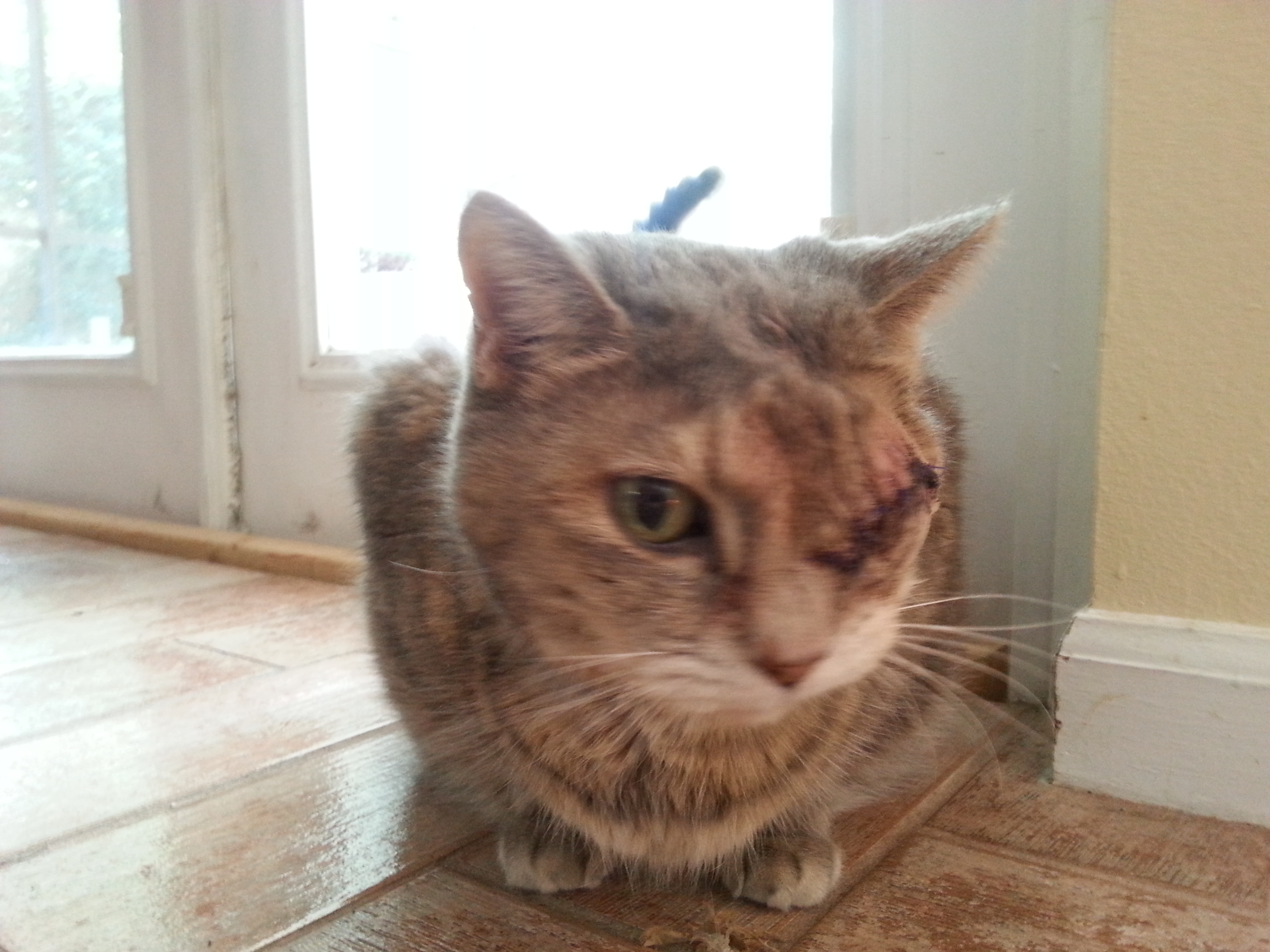 It started about a month ago when I noticed one of her eyes seemed like it was swollen and I took her to the vet thinking she may have gotten something in it and rubbed it too much. Unfortunately, the vet said it was glaucoma. She had already gone blind in that eye and was experiencing severe discomfort from the eye pressure buildup.

There were two options it could be treated with medication or there was a 5k surgery that "may" relieve the swelling. I opted for the medication. The Doc wrote a script and I got it filled at the pharmacy. It is the same eye medication for humans with glaucoma and luckily there is now a generic brand of one type. It cost a few cents short of $100 for a months supply.

I gave her the drops twice a day for a few days, but something seemed off so I cut it back to once a day for a day before taking her back to the vet.

Gidget was allergic to the drops. The vet gave me some drops for the allergies and schedualed me to bring her back in a few days during that time he would look into the other medication. I brought her back a few days later and she cleared up some but the eye pressure had returned with a vengeance. She was actually crying bloody tears.

The vet had located a slightly expired bottle of the other eye medication to try however she also had a reaction to it which prompted another visit.

The medication he gave me would generally cost 4 to 5 hundred dollars. By this time we had already talked and decided that in the future the eye had to come out but the hope was to bring down the pressure for a while before doing that by giving her the anti-inflammatory with the medication daily.

That worked for a while until last week when Gidget stopped eating stopped drinking and started to shut down.

OK, back to the vet this time she needed IV fluids and was taken off all medication. After talking to the vet I had him keep her until she was well enough to have her eye removed which was a few days later. I brought her home yesterday however she will not eat or drink even though she is meowing for food every time I go by.

So guess where I am going after I post this? If you guessed the vet you're right. It seems she can't smell the food due to the swelling no matter what kind of food I give her. She will not even touch canned tuna fish.

Guys this is tiring, but that is all I am really complaining about. I had two family pets pass away last year from old age and when this one goes I want it to be old age as well so I will do what is needed. The vet has been great about this discounting a lot of it like boarding and he really saved me from buying a 4 to 5 hundred dollar medication that we found out wouldn't work.

It is possible she never had glaucoma in the first place I guess I will find out in a few days because the vet said there was something weird that he removed while taking the eye out which he is having biopsied free of charge. She may have had a tumor that was causing the eye pressure to build. Honestly, I hope that is what it is because cats have a 50/50 chance of getting glaucoma in both eyes so f it is some kind of tumor then there isn't that risk. Glaucoma is pretty rare in cats my vet said he had only seen about 4 cases in his 30 years and my cat was a first for being allergic to the meds.

OH well, I just felt like sharing I am now signing off to take her to the vet.
edit on 17-3-2015 by Grimpachi because: (no reason given)

posted on Mar, 17 2015 @ 01:41 PM
link
God bless you and your kitty. I hope and pray you get the answers you are looking for. I was a vet assistant for two years and I saw miracles happen every day. Good luck to you and your baby. a reply to: Grimpachi

Oh, I'm so sorry! I hope you find out what's going on with her! That's got to be hard on you... Keep us updated!

Gidget will miss it but will adapt, I have a tabby sitting on my bed right now, his eye opposite side to Gidget was removed after he got ill as a kitten, does not stop him chasing my shoe laces or the local lady cat's though and woe betide he get's into the bathroom while I am in the tub, it is kind of like Jaw's in reverse as he make's for the end were he knows your feet are and wait's for the toe's to surface, utterly terrifying.

Gidget will be OK but will feel poorly for a little while, at least the little lady has someone who loves Her.

Poor, grumpy baby. She'll be fine in a jif if all goes well. Blessings....

Have you considered cannabis extract or the like - works for human glaucoma.

Jeez, i don't normally get all warm and fluffy here, but this really touched me - poor girl, i hope she makes a good recovery. Give her a big snuggle from me and don't tell anyone about this post, ok?

Hope things work out. Hopefully she'll come around and start eating. It always makes me nervous when they won't eat.

Is she on something for pain?

Good luck to her!

I just got back from the vet and they are going to keep her for a few days to make sure she eats. The antibiotics as well as the swelling are probably messing up her sense of smell so they gave her a shot of something to induce more hunger.

Cats can only go about 24 hours without food or water before the risk of damage to their organs can happen. I had seen it with a previous pet.

If I could get her to wear a pirate patch I will, I have a few of them around I don't use.

Did I mention I lost vision in my eye years ago in the service in fact I go back to see my doc tomorrow down in Miami from the reconstructive surgery I had last Thursday. Boy, we are a pair. Yup, I wear a patch.

A pirate family we will be. Now if that happens with my dog I am really going to be thinking someone's trying to tell me something. Anyway, Docs going to watch after Gidget for a few days so that takes a little off my mind. The trip down and back tomorrow will take about 9 hours just in drive time so I am sure they will get her to eat and give her, her meds on time. It is great having a good vet with his staff nearby. I don't think he is even going to charge me for watching after her but when I pick her up I am going to insist on paying. I am not rich, but I am not poor either and I am sure paying will enable him to help more people that are not so fortunate.
edit on 17-3-2015 by Grimpachi because:

Pieces of eight and shiver my timbers

originally posted by: TNMockingbird
It looks terribly painful and uncomfortable.

Is she on something for pain?

Good luck to her!

Actually she seems to be in less pain than before the surgery plus she is on some pain meds.


The eye pressure from the glaucoma had to be painful the pressure gets much higher than what it does in human. Remember the first Total Recall with Arnold, when they were on the surface of Mars with their eyes bugging out? That was kind of what it looked like when the pressure was at its worst.

A pirate family we will be.

Good luck to ye both!

Best wishes for you, and your lil furry-baby.

Oh my Gosh! What a picture...(the reference to Total Recall)
I'm glad they are keeping her and that is probably what's best. It will give you some time to rest as well...

Pirate family! Cute!
Would be interested in what the biopsy turns up...