You talkin' to me?

I'm 36....too old for this crap! Lol! Plus, yesterday I was mounting some bookshelves to my wall. The hammer kicked back and nailed me in the mouth. So my lip is busted real bad. So punk rawk!

I guess now I'm going to have to be a taxi driver!

edit on 13-3-2015 by ladyvalkyrie because: thumbnail instead of full size

With a handle like that, you cannot complain too much about a fat lip and an impromptu haircut! And regarding to your assertion that at the age of thirty six, you are too old for this crap, I say poppycock! One is only ever as old as one feels, and since you were going for just an inch more hair than you currently have, you obviously were not feeling particularly old when you set out to trim your hair!

Besides, it looks great!

I am not sure that a change of hair cut, and a bruised lip requires you to change jobs either 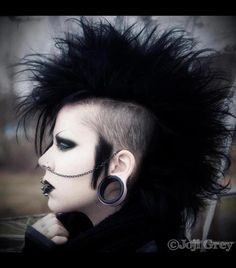 Don't you dare touch it! You look gorgeous, now leave it!!

posted on Mar, 13 2015 @ 08:55 AM
link
Looks like you have Auburn hair?
Please tell me you have green eyes and an Irish accent. No matter the hair cut, that would make you the perfect woman.

Seriously though.... It looks fine and a fat lip will heal. Be thankful the hammer didn't knock out some teeth.

As far as the hair goes, it looks good on you.

Hammer smack? Well, there's nothing good about that. Hope it isn't too sore.

Everyone should say "poppycock!"

@TrueBrit You are right, there's no official age limit. And I would have been 100% down with this 20 years ago. But I did NOT mean for it to be this extreme. Luckily I'm on disability so I don't have to worry about being fired or anything. I can just hide out in the country until it grows out- not that I ever go anywhere anyway. PTSD/Anxiety/Agoraphobia makes it near impossible to go out in public.

And you are all right that I made it out lucky in my tangle with the hammer. A couple of my teeth are sore, there was blood and swelling, but I will be fine by next week. Teeth creep me out, I would have lost my sh!t if I had knocked some out.

tattoo a valkyrie wing on the bald part.

I'm a lot older than you and have had long, uncolored hair my whole life. A few years ago, I decided to do something different, so got my hair whacked off short and put a couple red pops in it... It was fun and I loved it. It was more about how I felt than how it looked... I think going to extremes once in a while makes life more rounded out, if that makes sense.

Age is just a number. Seriously! If I acted my age, I'd be SO terribly bored and boring!

How rad would this have been when I was in Patrol??? Instant street cred!

Bob and weave, I got. Most of the time. I never saw that sucker coming until I was seeing stars. BAM!

The newspaper article neglected to mention the fact that DPD broke the law by forcing me to work too many hours. They also forgot to include the fact that I was incredibly ill with pneumonia and a fractured knee and was overloaded with steroids. They also failed to mention that steroids + sleep deprivation = mania. They also failed to mention that when I went to the ER I was ignored for 2 hours then jumped and choked by an EMT as I sat on a bed in my panties. And they forgot to include that DPD took me home from the ER and left me there for 7 days even though I was calling them every day begging for help. There was no follow up article about the fact that yes I was charged with assault, but it was dropped because it was actually self defense. And the fact that I am now receiving Pension disability because multiple doctors confirmed that I'm permanently effed up and it was the department's fault.

THIS was me in Patrol:

* for the record I hate donuts, but couldn't pass up the photo op

If I had a dollar for every time someone said to me "You are the coolest cop ever!" I wouldn't need the Pension money.

Here's the thread I made on the subject with all supporting evidence, if anyone is interested:
ATS Thread
edit on 13-3-2015 by ladyvalkyrie because: add info

I like i, cutie, obviously if you can't fix it with a hammer it's an electrical problem.

And don't worry about your age - it's just a number. I carried around long brunette hair for most of my adult life - all one length and halfway down my back. Last summer I chopped it all off into a spikey pixie cut and put purple (like grape-soda-PURPLE) streaks through it.

Definitely the wildest hair style I've ever had and I absolutely love it. Now I just wonder why it took me so long to do it!