posted on Mar, 13 2015 @ 05:47 AM
link
Normally I wake up happy. I stopped going on Facebook because it makes me unhappy, especially the first thing in the morning. Today I woke up and tuned into ATS, after about 5 minutes it made me angry. First because the old hag ran her grandchild to death, that pissed me off. Then we are allowed and its 100% awesome to say anything negative about whites but cant even approach the subject of bad things that blacks do without being called racist and comments being deleted, its getting old and Im not doing it any longer. I think I go to bed too early and wake up with my mind energized and these things irritate me. It only happens about 5 times a year that I wake up annoyed or pissed. Usually its being mad at people that hate. I had a friend bring a hater who talked too much over last night and he put me in a bad mood, that wont happen again. Also, for people in this country that do not like the U.S. flag and feel that its offensive, MOVE !!! If You fuss way too much about gays then it probably because You really are gay and hate it so you hate yourself. If you hate marijuana, don't smoke it. Thanks to all of the cool people on here I am still here, ATS has some cool folks for sure.

Did you once kill a man for snoring too loud?

I've done a lot of freaky things in those first five minutes. Never quite managed genocide all the same. LoL

Point is that afterwards its like a switch is flipped and im a whole other person with a sketchy recollection if any of what has taken place and who would rarely consider committing an act of violence unless provoked. But for those first five mins best just to step the hell away and let me awaken at my own pace.

Don't fight the natural self, it will just make things worse. The trick is to steer one's moods towards less stormy seas and realise we are the captains of our own ships.

posted on Mar, 13 2015 @ 06:50 AM
link
My wife does. She woke up PO'd at me for a dream she was having. Said I was wearing a skirt and going out for a walk in the rain ... and I wouldn't listen to her when she told me not to. I never did figure out which of those three things she was maddest over.

She was probably pissed about the part she left out. The part where you came back home and tracked mud through the house in your stilettos.

That would have pissed me off too.

My workmates have a nickname for me on a morning and when I go they call it 'The Rage' - this only ever happens in a morning - I'm known for it.

Fortunately, I woke her up before she got to that part. 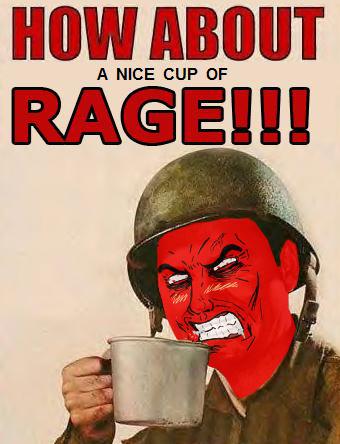 posted on Mar, 13 2015 @ 07:20 AM
link
I wake up angry if birds are chirping. I wake up angry if my kifs are playing COD at top volume. I used to wake up totally livid when I had my alarm set to Wide Awake by Katey Perry.

None of those have anything to do with me.( Except how many terrible names I was calling that woman until I changed the song.) Maybe you should find a happy song for the morning or read happy things first things? It works for me!

I, on the other hand, not so much.

The kids are in and out looking for lunch money, books, whatever they left in my room while they were piled up on my bed the night before...

Honey wants to talk about the day before, the plan for today, and maybe even plans for tomorrow...I say "why didn't we discuss this last night?". What a routine! LOL
I am apathetic for an hour or two. I could care less. I am still climbing out of the fog.

I feel like a robot in the morning. No feelings just the repetition of movements it takes to get all of us out and going...