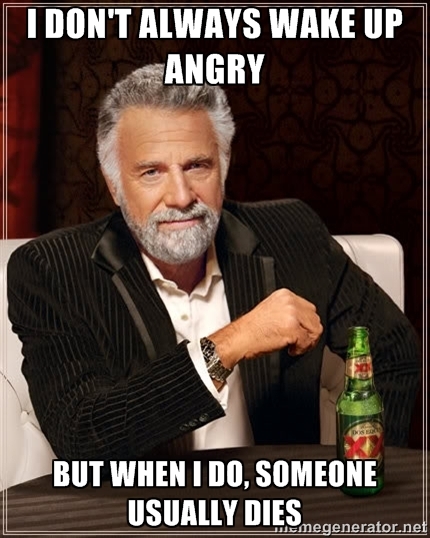 posted on Mar, 13 2015 @ 11:54 AM
link
Only when I'm woken up by someone else. Which is most days. Today I've let it ruin my mood for hours. I go on a cleaning binge till I'm exhausted and hungry. Then I pretend it never happened. I guess my anger can be channeled into productivity. My anger has a hair trigger though. Always has. On the other hand, I do enjoy waking up. If you didn't you wouldn't have any emotion.

posted on Mar, 13 2015 @ 07:40 PM
link
Have a snickers bar. You know you get angry when you're hungry.
In all seriousness, I get angry when I wake up. It's when somebody wakes me up. It's hard enough for me to fall asleep and to get jerked out of sleep makes me about nuclear.

i guess i start cursing at whoever tries to wake me up (i think it's because they get mixed in with the dream i'm having--which is usually intense and mildly frightening--and i get confused with if the dream is reality or which reality is reality or something?).

sucks because i still live with my parents and they aren't the most understanding people anymore. we used to have a great relationship. and we still do sometimes. but then lately over the past couple of years they go bipolarbear on me. they seem to basically hate me and put me down for everything and nothing at all. and they never listen to a word i say anymore. because they 'don't care'. which hurts. i wont bore you with too many details but basically imagine getting called every insulting name that isn't even an accurate description of you or what you 'did' and is totally uncalled for 99% of the time. like i have had an eating disorder. and they still call me fat, pig, and other words that i can't say on here. thank goodness i have my fiance. but i really wish my parents would go back to how they used to be because whatever theyre doing is taking a really heavy toll on me emotionally and physically.