posted on Mar, 12 2015 @ 12:59 PM
link
Yeah,I'm excited. But what production values will be lost if they shoot a movie a year?
I don't mind though. Our parents (well my parents) grew up during the serial days and they loved it.
Digital movie making and skilled writing could make this a juggernaut. I'd be perfectly happy watching that story every weak/year. Yay!

posted on Mar, 12 2015 @ 01:05 PM
link
The actual process of making the movie takes longer than a year. They've just got overlapping production now. If the movies have release dates set, they are likely already in progress.

originally posted by: Spader
Digital movie making and skilled writing could make this a juggernaut. I'd be perfectly happy watching that story every weak/year. Yay!

Abrams is shooting Episode VII on 35mm film and using CGI as little as possible to recapture the 'look' of the original films.

I have been trying but failing to do the same.

I am a huge JJ fan and a massive star wars fan and after that teaser trailer and seeing the cast I cannot help but get drawn into the hype. 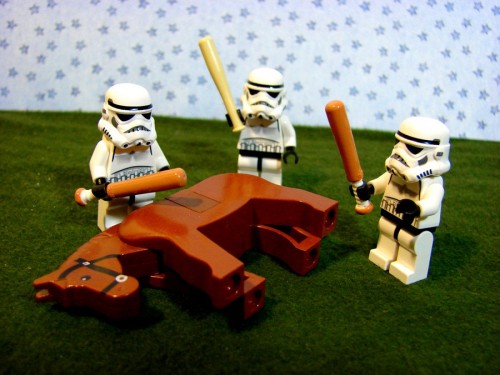 Just let it stop already. It was bad enough when they started the movies after the first three it's time to leave this dead horse alone. Look at the kind of crap the new Star trek movies turned out to be hate to see that happen to the Star Wars franchise as well.

I also happened to think the first of the new star trek movies was pretty good.


If anything episodes 1 - 3 taught me is to temper expectations of this series going forward. Being put under Disney is ok I guess, but having J. J. "lens flare" Abrams direct it has me concerned. Especially after all the goofy plot holes in the new Star Trek movies (Why do they need spaceships anymore if they can teleport anywhere in the universe?).
edit on 12-3-2015 by Krazysh0t because: (no reason given)

I am not worried about the Disney thing,

Disney made Marvel what it is today, they are also the guys behind the new show Star wars rebels and the new comics both of which so far are pretty amazing.

This is the best star wars pic ever! LMAO!

Sorry that was an incomplete thought. I edited it. Disney isn't what I was concerned about. It's Abrams.

I can't speak for Rebels, but the clone wars television show was awful. Poor animation (dead eyes, bad body shapes, jerky movements). The terribly over-used voice actors. Painting Anakin as a heroic figure when there was ZERO precedent for it based on his whiny, easily seduced to the Dark Side stupidity in the prequels. The addition of the sarcastic, unrealistically bad-**, I know better than the adults child character. Not to mention the typical issue of writers trying to work every aspect of the universe (past, present, future, canon, non-canon) into he show whether it's appropriate or not. (see Smallville for more ridiculous examples).

I also have plenty to say about the prequels. So all in all, I'm not expecting anything good from the next set of movies. What was once a beautiful story about moral conflict (a fundamental story in western culture), underpinned with philosophy collated and categorized by Joseph Campbell, has become a shallow series of toy commercials lacking substance.

This is what I'm getting at. I'm really afraid Star Wars is going to be turned into another big budget "eye candy" series (all explosions and cool visuals but no plot). Abrams already did it with the new Star Trek movies. Now he's directing this movie.

Don't get me wrong, I will probably see the movie, but my expectations have been severely tempered. If episode 7 doesn't fulfill its hype, I probably won't see 8 or 9.

Agreed. I will likely see number 7 to see where they place the original characters and how they treat them. I find it sad that Disney/Lucas has foresworn the Zahn novels. There are a lot of good ideas in that series ripe for adapting into a movie format.

I've purposely avoided trailers for this movie. If I start collecting information this early I'm afraid I'll talk myself out of seeing it completely.

Yea I'm avoiding trailers too. Unfortunately the internet has already clued me into the picture of the lightsaber with little lightsaber guards coming out of the sides.

It was that good, sometimes i sneek into the to toilet at work and watch it when nobody's about just to get a kick.

Then i feel ashamed all over again....
edit on 12-3-2015 by OtherSideOfTheCoin because: (no reason given)

Nope. I've been led astray by trailers in the past before. It's easy for a trailer to make a movie look better than it actually is.

I also enjoyed star trek (2009), into darkness was ok-ish imo. Holding judgement until it comes out.