FERGUSON, MO (KTVI) – Around midnight a two police officers near the Ferguson Police Department were shot according to St. Louis Post-Dispatch reporters at the scene. 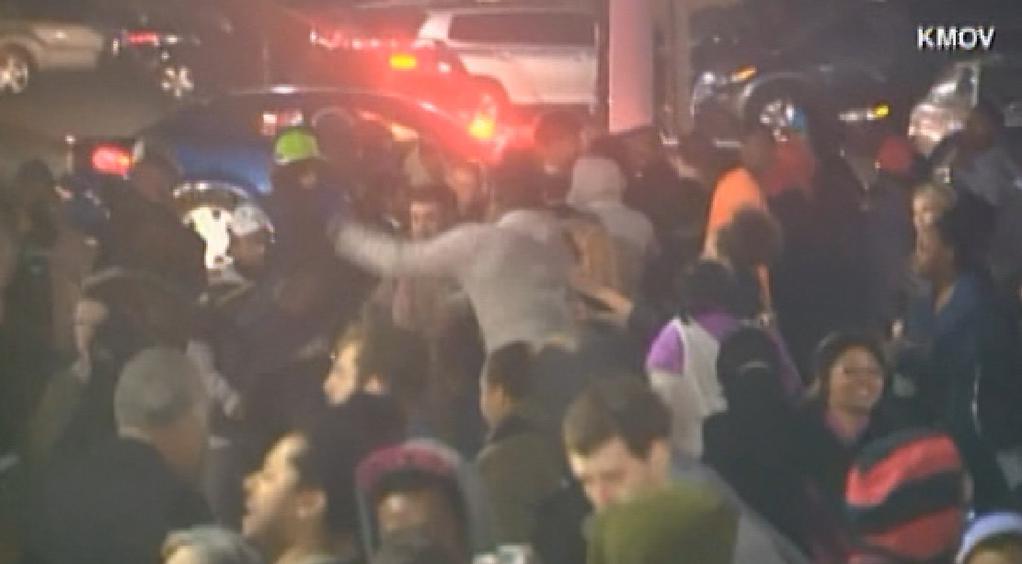 Postings on social media, are saying the shots were fired from a house on a hill across from the Ferguson Police Department. Further post say police units and crime scene technicians are at the house on the hill.

It seems like there's very limited information out there about this currently.

All that I've been able to find says that there was a protest outside of the Ferguson PD, and 2 officers were shot. Their condition has not been released yet.
edit on 12-3-2015 by SkepticOverlord because: added image from twitter, moments after the shooting

Considering the report that just came out that was quite damning about the institutional rasicsm plagueing this departmement and that the police chief just stepped down as well as other public officials, I find this to be quite the suspicious timing and a way to drum up support for the police.

The chief, Thomas Jackson, who took over the Ferguson Police Department five years ago, becomes the latest high-ranking city official to fall in the wake of a scathing Justice Department report that accused the city of using its municipal court and police force as moneymaking tools that routinely violated constitutional rights and disproportionately targeted blacks. The municipal judge and city manager, as well as the top court clerk and two police supervisors, have stepped down in the wake of the report’s release last week

Quite a lot has been happening, with the resignation of the police chief, and the report recently released, and now this. Im unsure how these new events will escalate the situation there.

Just saw another article pop up with some more possible information.

At the moment, it seems that the 2 officers may not have been Ferguson PD, but it's not 100% confirmed yet.

Ferguson Lt. Col. Al Eickhoff tells the newspaper that he didn't think either officer was from his department. Eickhoff says he doesn't know the extent of the officers' injuries.

posted on Mar, 12 2015 @ 01:08 AM
link
I didn't know there were still protests going on there. I have a feeling things are going to get much uglier if they die. The cops are going to be busting even more heads.

It makes zero sense for anyone to start shooting cops, when the department is being held accountable.

What does make sense is that agent provacateurs would do so in order to take away from the progress that has begun since the report came out!

Witness Markis Loehner on CNN on the phone is saying that the 4-5 gunshots came from a separate area far removed from and behind the main protesters in a grassy area and were not in line or expectation with the general "air" of the protesting.

He says the bulk of the protestors scattered around then in shock. They were asked if it is less of a protest but more of a crime scene now, witness says "I would imagine so with two officers down" but he doesn't know for sure because the demonstrators including himself fled following the gunshots.

edit on 2015 by BlubberyConspiracy because: (no reason given)


I didn't know there were still protests going on there. I have a feeling things are going to get much uglier if they die.

I didnt know that there were still protests going on either. Every now and then I would see a little article about a small protest here or there, but I though they were mostly done with now.

Again, here's another article that just came out with possibly more information. This one if from PoliceOne.com. The 2 officers were from STL County PD and Webster Groves PD. One officer may have been shot in the face.

Details are scarce, but several social media accounts and videos indicate that around 1:20 AM shots were fired and the officers were hit. Some reports indicate one of the officers was shot in the face.

According to Christine Byers of the St. Louis Post-Dispatch, the officers were from STL County PD and Webster Groves PD.

posted on Mar, 12 2015 @ 01:20 AM
link
If I hadn't fallen in love with the town and the people there, I would suggest that every cop in Ferguson walk off the job and let those thugs have at it.

Says that the incident was not a building tension that led up to a shooting or anything of that sort, and while there were new faces in the protests, things were beginning to wind down for the night at the time of the incident in front of the police station.

The gunshots followed the winding down of the protests.

I saw a CNN newsline while watching CNN Newsroom

According to CNN, a "Police Source" says that both officers are expected to survive at this time
edit on 2015 by BlubberyConspiracy because: (no reason given)

originally posted by: DrunkYogi
a reply to: buni11687

Probably because people such as yourself keep referring to it as a murder.

This is what the TPTB wanted. Releasing that report just riled the people up even more
NOW their going for blood and think they are in the right.. It is a dangerous thing.
The people their think now they have to spill blood to change the system..

Are they right? They could be. Maybe not

screw the police in general

posted on Mar, 12 2015 @ 01:45 AM
link
Several tweets from protestors indicating the police are on full tactical alert. This image came over Twitter just minutes ago. 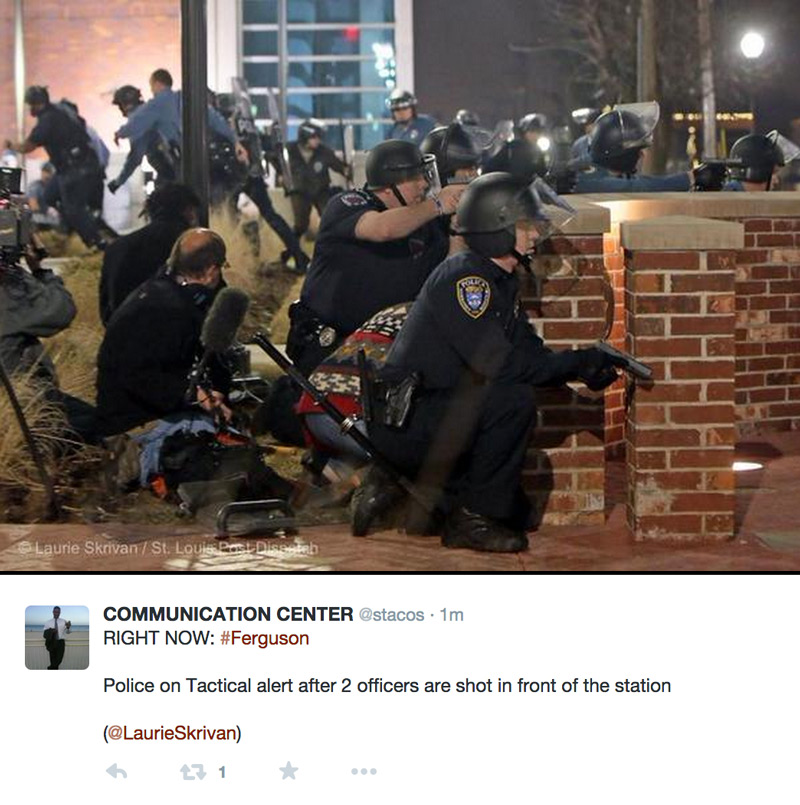 originally posted by: DrunkYogi
a reply to: buni11687

both the local and the federal (thats the "All of you are racist except me" Eric Holder's) justice department found that the officer did nothing wrong. The Eric holder who was so sure the officer's KKK sheets and pillow cases were just at the cleaners that he pre judged him guilty had to admit he wasn't. So your calling it murder means you will accept no amount of evidence to the contrary. It was not Murder. it was justified. you are wrong. and no amount of blinking blankly when informed of the facts and restating it's murder again and again will change that.
edit on 12-3-2015 by stormbringer1701 because: (no reason given)

posted on Mar, 12 2015 @ 01:54 AM
link
In the video she said "It's on the hill" and turns around to look. I can't tell for sure but "the Hill" doesn't seem all that close to the protesters or the cops for sure. Not likely a hand gun is my point. So is this like a sniper situation with someone out in a field with a rifle??? Any info on the details yet??

IpoopThere4IAM
+2 more
posted on Mar, 12 2015 @ 02:08 AM
link
I wonder if the rounds were green tip .223.
The ammo they wanted to ban for the safety concerns of law enforcement officers.
If so, this is convenient timing indeed.

When you kill someone who doesn't want to be killed it's called murder. I don't care what the law courts call it when they try to justify it.