The head of German "anti-Islamisation" movement Pegida, Lutz Bachmann, has resigned after a photo of him apparently posing as Hitler emerged.

Mr Bachmann stepped down just as tens of thousands of people were expected to rally in the eastern city of Leipzig for the latest Pegida rally.

Prosecutors opened an investigation after the photo was published on the front pages of German newspapers.

A Pegida spokeswoman sought to play down the Facebook photo as a "joke".

But the German government condemned the photo. Vice-Chancellor Sigmar Gabriel told Bild: "Anyone in politics who poses as Hitler is either a total idiot or a Nazi. Reasonable people do not follow idiots, and decent people don't follow Nazis." 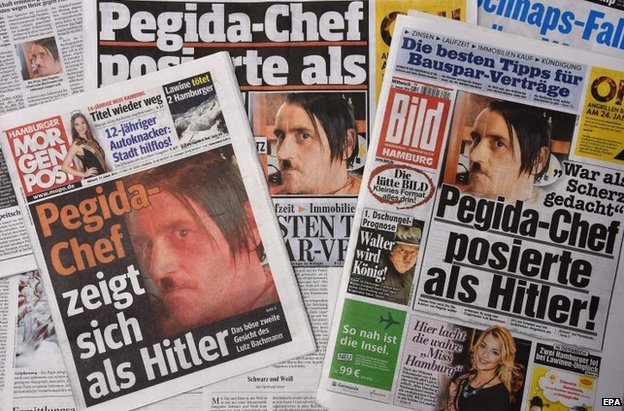 I am definitely going with "total idiot." Nevertheless, this is a reminder that Muslims and Jews in Europe have much in common, and need to cooperate rather than despise one another. In fact, Muslims who wish to live in Europe could learn from the experience of the Jews. It is not necessary to impose one's own'religious standards upon the mainstream culture, and that assimilation is possible without the loss of identity.

posted on Jan, 21 2015 @ 12:28 PM
link
He received death threats recently and stopped a monthly "Islamization protest" which really is just a Rally equivalent to Hitler's.

& people were actually defending him as some pioneer of a movement against Immigration...

He is just a bigot gathering other bigots together to enhance bigoted endeavours while denying bigotry!

Hmm. You may need to take a piece of the cap foil and make some tin foil underwear (and lay off Miss Hamburg, she's mine! Or at least more mine than the Hitler guy).

This guy is gonna get suicided soon, I can feel it!

Hopefully right after he bites down on a cyanide capsule.

originally posted by: Eunuchorn
This guy is gonna get suicided soon, I can feel it!

Actually, I have a sneaking suspicion he will end up in Russia.

Hitler used the Jews as a scapegoat to justify his own expansionist policies, has anyone forgotten?

It was just a cover then, too.

originally posted by: AugustusMasonicus
a reply to: DJW001

She is quite stunning! As for him, the Hitler look isn't flattering.

We probably can both agree by considering Hitler as the grand champion of ethnical proselitism.
As long as this ideology remains one of the fundamentals of all monotheist religions, the problem will hardly be solved.
It's not a victory of one against the other that we need. Unfortunately, that's where we are heading.
A proper and widely distributed understanding of the real nature of the silly game in progress can only solve the issue IMO.

originally posted by: AugustusMasonicus
a reply to: DJW001

posted on Jan, 21 2015 @ 01:19 PM
link
Well, no. The prosecution was opened because the guy called immigrants all kinds of derogatory things on his Facebook page, which is being counted as an act of "incitement of the people" and punishable in Germany. This Hitler picture, he claims, was a joke and publicly posted to a German voice actor's page, who, quite brilliantly, impersonated Hitler in the bestseller (audio-)book "Er ist wieder da". This has been translated to English only recently and I recommend it highly. The picture in and off itself may have been a tasteless joke, but it is definitely nothing that would start legal action in this country.

I am not defending this guy in the slightest, mind you, but I oppose sensationalist journalism and emotional witch hunts to the max.
edit on 21/1/2015 by Motte because: (no reason given)

On the radio the other day they were saying how Bachmann and the other guy who set up pegida were busted in the past for stuff like burglaries and football hooliganism.They also had connections to the far right before all this Pegida stuff and were involved with criminal elements within German biker gangs according to the German cops-so the radio guy was saying..

If that is true,they are a right pair of dicks,and I am not surprised to learn Bachmann likes to dress up like hitler.

posted on Jan, 21 2015 @ 01:35 PM
link
Someone in Bachmann's position needs to be very careful about the jokes he makes.a reply to: Motte

originally posted by: CharlieSpeirs
He received death threats recently and stopped a monthly "Islamization protest" which really is just a Rally equivalent to Hitler's.

...I was unaware that the modern German anti-Islmation movement had killed 11 million muslims... Hyperbole should probably be avoided in intelligent discussion, by the way.

posted on Jan, 21 2015 @ 01:44 PM
link
If I took photos of myself dressed up as muhammad, and posted them on Facebook, would that make me a Muslim?
No, but I suspect it would be very bad for my health,

If I was a nazi, but not a member of the SS or Gestapo, would I be classed as a moderate nazi ?

Even if Lutz Bachmann, has stepped down it wont affect the movement, and I find it hard to believe he is a nazi at all.
The movement is growing by the day, we have two such groups in the UK now one in the North and another in London.
People have had enough of these Islamic nut jobs running amuck in our Countries, and the "moderates" haven't done enough to out them, and neither have our governments.
Most of the marches in Germany have a live feed broadcast, the far left are showing their true colours and PEGIDA are doing exactly what they have said they will do, protest peacfully, how long before Islam shows its colours

Of course, hardly any Jews had been killed while Hitler was rousing das Volk at his midnight rallies.

The thing is, he actually has *no* position whatsoever, he just grabs the mic at these marches (so do others). His criminal background has been widely reported btw, the protesters know this, but his person is not at the core of any of it, obviously.
This "movement" will continue with or without him, and while I personally don't lean either way, I am painfully aware of the biased media reports on anything *GIDA and the utter disrespect for freedom of speech...and also of the violent attacks on these protesters. Only a few hours ago, there were two cases of arson to stop trains with *GIDA protesters reaching Leipzig. Take a wild guess who set these cables on fire...

Divide et impera, as always. I refuse to take part.

You do realise Hitler's rallies began in the 1920s... Right?


Long before he had taken a life...

Historical knowledge should probably be attained for intelligent discussion, by the way.