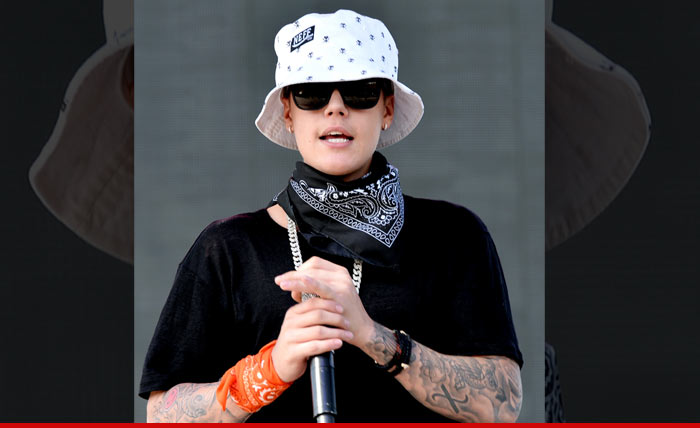 Like a tattooed lamb to the slaughter, Justin Bieber has agreed to be the guest of honor at a Comedy Central Roast in March ... and you can already hear Jeff Ross licking his chops.

Ryan Seacrest broke the news on Twitter ... saying, "Yes I got confirmation @justinbieber is getting roasted by @ComedyCentral in march...love u justin but it's time lol #BieberRoast."

Word on the street is that Bieber was game to be roasted for a while ... and had been hoping to work out a deal with the network.

Bieber has been wanting to be 'roasted' at Comedy Central. Now he's getting his wish. The roast will take place on March 1st. Considering all the fodder the roasters have .. this could last for hours. Considering how sensitive he gets to people pointing out the stupid things he does, I'm wondering how this is going to go over. Will it feed his ego ... or push him over the edge and he'll get pissed off? I guess we'll see ...

Side note - I hope Comedy Central hides the mop buckets before the Biebs shows up. Otherwise the health department might have to get involved.

edit on 20/1/15 by SecretKnowledge because: (no reason given)

Wonder how long it'll take him to figure out the people roasting him aren't doing it to just be funny but actually intend to be mean.

And then storm off stage with his pants falling down.

originally posted by: SecretKnowledge
No way! There is no way he'll be able to take it.

All they have to do is bring up Selena Gomez and he'll have a melt down.
That's what the cop in Florida did while Bieber was being questioned.
Bieber went dead serious and told him to never bring up her name.

Would love to watch it if it were live. All those roasts are always edited by the person roasted with jokes, etc. removed. They can also request "off limit" topics... Great concept though...

That would absolutely make my whole day.

posted on Jan, 20 2015 @ 12:02 PM
link
The roasters need to be careful what they say or his fans may threaten to kill them like they do on Twitter!

originally posted by: watchitburn
Hopefully it's so bad the he kills himself.

That would absolutely make my whole day.

That should be hard to do... //sarcasm

I sense a tantrum coming-a once in a generation tantrum.

This is a kid that had to rely on his personnel to ensure his fans that his manhood was not photoshopped. In a way I feel sorry for him because he has no Idea what he signed up for, but then again I am looking forward to see this corporate commodity decrease in value overnight.

Call me a non Belieber if you must-but I can't wait to see this.

posted on Jan, 20 2015 @ 12:14 PM
link
a reply to: Shamrock6
Yeah I think from his perspective he may think it is going to be some high honor. like David hasselloff, James franco, or Charlie Sheen. But I think from everybody else's perspective it will be a chance to clown him and just have a format to come after him.

posted on Jan, 20 2015 @ 12:28 PM
link
Here's a thought. I wonder if any of the roasters will take on the almighty "star" system in place in our culture. This youngster, at an early age, with a modicum of talent, a pretty youthful face, is snatched up by the "star makers" promoted to the hilt to turn him into a pre-teen heart throb. And not just teen girls but pre- puberty girls. Getting them all excited about this hot boy who they can long for. Makes me sick.

They trained him. They took his tender little boy ego and fed it and fed it and fed it. They surrounded him with sycophants who day after day told him he was the greatest talent to come down the street since Elvis. He grew up thinking he was invincible. Thinking he was king of the world. They kept him on a tight leash for years but as he was just a little boy he thought it was all his doing and had no real idea about the true nature of the system he was being used by.

When he got older, the leash was loosened. They let him run off the rails. Did they care? Hell no. There are always plenty more where he came from. More pretty young faces, male and female, to be presented to the foolish who follow this "star system" to the tune of billions of dollars a year.

That said, will I watch this roast. Oh, you bettcha. I just think it would be a lot better with some in depth digs at the pirates who run this youth culture.

I dislike Justin Bieber and his attitude as much as anyone else, but i would not wish death upon him.

As far as the thread goes, i predict that he will enjoy the roasting initially, but will eventually grow agitated resulting in the cessation of the session.

posted on Jan, 20 2015 @ 01:37 PM
link
He knows it will be all "in fun". Besides, I am positive that the couple million dollars he gets from CC will make it easier for him to take the punches. This should be a great Roast!! I cannot wait.

originally posted by: SecretKnowledge
No way!
There is no way he'll be able to take it.

I will watch this on Hulu and pray to the idiot box gods that this happens. Only SHE can truly do this justice. (And please push him slightly over the edge. Just enough to make him realize what a creep he's been and think to himself, gee, maybe I should grow the heck up!)

Side note; I know in this picture he's wearing a boating hat and holding a microphone, while a blow up of the picture is behind him, but oddly, he looks like a girl holding a parasol. Am I the only one seeing this???
edit on 1/21/2015 by Anyafaj because: Added side note

Would love to watch it if it were live. All those roasts are always edited by the person roasted with jokes, etc. removed. They can also request "off limit" topics... Great concept though...


To be a fly on the wall in that crowd of audience members.....