page: 1
22
log in
join
share:
Jainine
+11 more
posted on Nov, 29 2014 @ 01:23 PM
link
Love vs looting and burning down business'
Which does more good? Which brings people together?
God bless this 12 year old boy and the officer who responded to him.
They give hope for the future in this country. 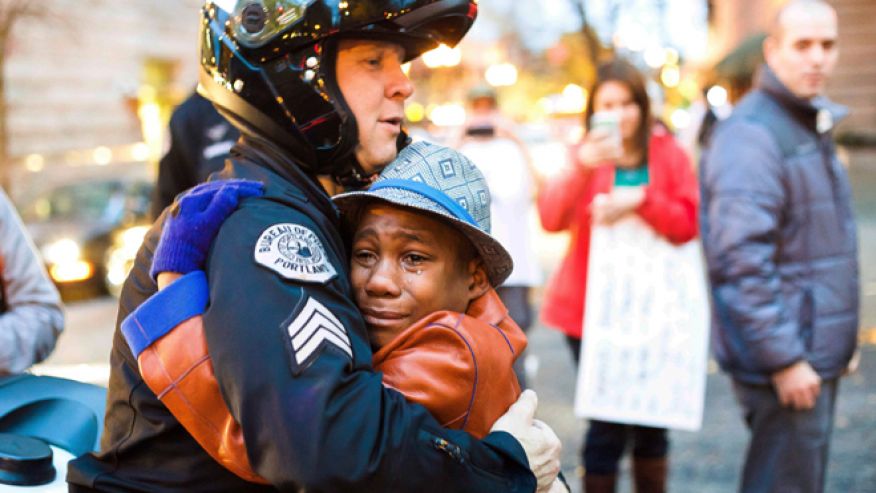 A touching photo that captures a helmeted white police officer hugging a teary-eyed 12-year-old African-American boy at a Ferguson shooting protest in Oregon has gone viral on social media.

Devonte Hart was in the crowd holding a 'free hugs' sign with tears in his eyes. The officer responded by going to him and giving him a hug. They have a conversation about things going on with Devonte. The boys mother was moved to tears and said it was one of them most emotionally charged experiences she has had as a mother.

The boys mother posted about the encounter -


We hit the streets (Nov. 25) with the intention of spreading love and kindness, and to remind (ALL) people that they matter in this world. ... I noticed Devonte was struggling. Tears. He wouldn't speak. He was inconsolable. My son has a heart of a gold, compassion beyond anything I've ever experienced, yet struggles with living fearlessly when it comes to the police and people that don't understand the complexity of racism that is prevalent in our society. ...

It was one of the most emotionally charged experiences I've had as a mother. He trembled holding a Free Hugs sign as he bravely stood alone in front of the police barricade. Tears rushing from his eyes and soaking his sweater, he gazed upon them not knowing how they would react. After a while, one of the officers approached him and extended his hand. Their interaction was uncomfortable at first. ... There were generic questions about his favorite subject and what he liked to do in the summer, but the one that mattered hit straight to the heart. He asked Devonte why he was crying. His response about his concerns regarding the level of police brutality towards young black kids was met with an unexpected and seemingly authentic (to Devonte), "Yes. *sigh* I know. I'm sorry. I'm sorry." The officer then asked if he could have one of his hugs.

Peace Among Protest (Love Is The Solution)

Beat ya to it. Just an awesome story though.

I don't think we can post this too many times!

That's just how we roll in Oregon.

Certainly put things into perspective for me.

posted on Nov, 29 2014 @ 04:38 PM
link
The problem with Ferguson is the media. This sort of thing is going on a LOT. There was also an obscure article about a group of heavily armed black men defending a white owned business. Not everyone in Ferguson (white or black) have this disgusting mentality that violence begets violence. A big thumbs up to these people.

That is the way it should be.
Great post. S&F.

posted on Nov, 30 2014 @ 11:31 AM
link
Put in perspective relative to current events it was shared, otherwise it wouldn't get the coverage. It really hits the hearts due to the current outrage, that's the problem, # has to go south before any good happens? If this child did this without the current racial tensions, we would never know about it. I'm happy it had/has an impact but it happened "after" the violence and bullsh*T lies. Someone wants division in our country against our brothers and sisters are we stupid enough to let it happen? I hope not. I really desire that we all come together over this and not continue to dig trenches between people of all colors. I have loved people from the three majority races in the U.S. Those would be white black and brown, and I have had many many great relationship with persons of most of the minorities that reside here. I am blessed to have known them all and I give love, thanks and appreciation to all of you and to those I have yet to know.