Everyone knows amazing tales of police helping others, going above and beyond the call of duty and so on. Let's post those here. I for one know police officers risk death every moment once they put their uniforms on. They are doing a job not many could do. Not all are corrupt and evil and I'm tired of hearing about how brutal they are.

Human is as human does. There will be rotten apples in every single profession as long as humans are in them. Common sense. 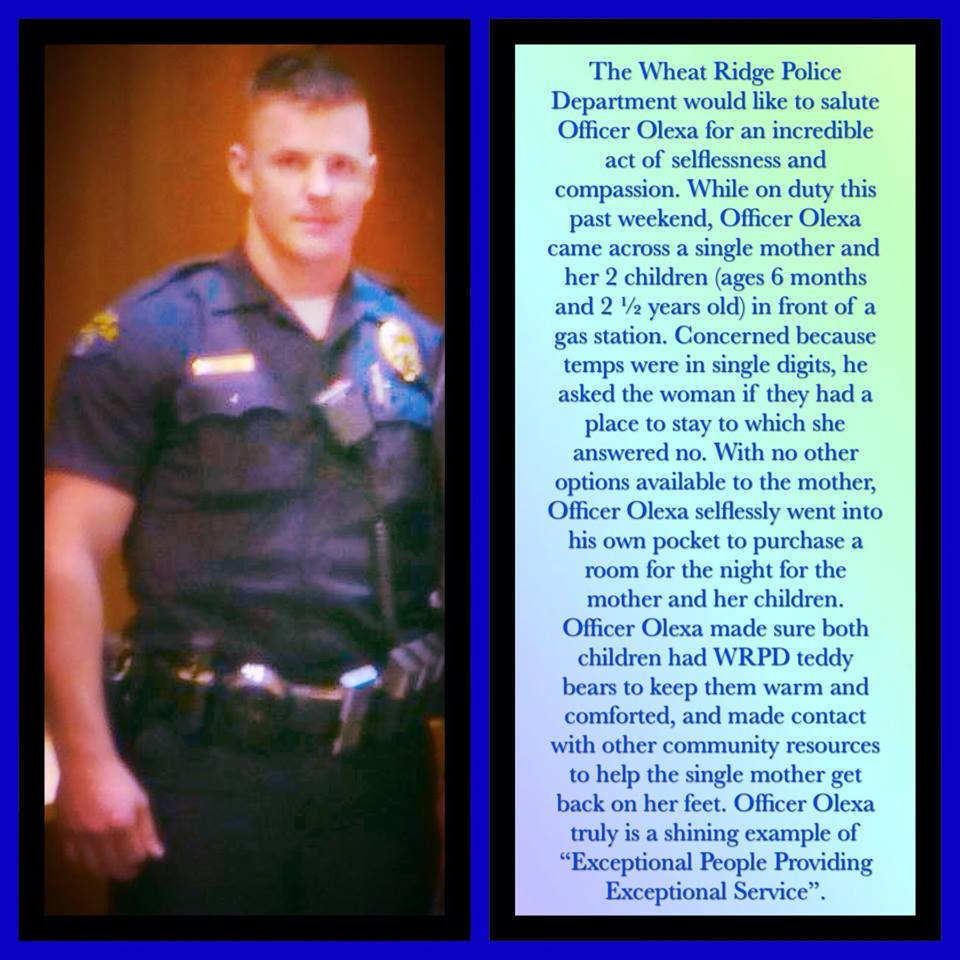 Not all cops are bad, Nashville PD met protesters the other night with water, coffee, and hot chocolate instead of teargas riot shields and rubber bullets.
Kuddos to the whole dept.

posted on Nov, 26 2014 @ 09:39 PM
link
Here's a thread I created a short time ago. It details how the police properly handle a protest, and how the protesters properly interact with the police.

Yeah, but in the case if police it is a hell of a lot more than just one bad apple. That having been said, ALL police are not bad, obviously, unfortunately a lot of them are. Its the nature of the beast.

That's just my opinion though.

and internal affairs investigations that cover up police brutality and corruption. LEO misconduct needs to be addressed by a citizens review panel of the taxpayers that pay the Officers salarys.

Mandatory LEO drug testing weekly and steroid use should be cause for immediate dismissal.

It was Aug. 15, and Pannone was responding to a domestic disturbance on the west side of Lancaster.

According to the teenage girl who phoned it in, a mother was choking her 13-year-old son. By the time Pannone arrived, it was over.

“I looked through the window, and I could see the child sitting on the couch in the living room with his head back. He appeared limp,” Pannone recalled Tuesday.

“The mom was sitting on the couch next to him, shaking him,” he said. “She was yelling, ‘I’m sorry! I’m sorry!’ She was hysterical.”

It’s what happened next that stands out in the story.

It’s also why Pannone is one among 22 officers recognized Tuesday by Lancaster city police during a twice-annual commendation ceremony at the Ware Center.

“I took his arm. He wasn’t breathing, his eyes were rolled back in his head,” said Pannone, who has spent nearly 12 years on the force. “I took him off the couch, put him on the floor and tilted his head back to clear his airway.”

Pannone was about to begin emergency breathing, he said, but the boy “started gasping for air, very faintly.”

So he started massaging the boy’s sternum and kept his airway clear. He also called for EMS.

“His breathing improved slowly,” he said. “It took him about a minute. When he came around, he couldn’t speak. His voice was really hoarse.”

Medics took over and took the boy to Lancaster General for treatment. He made a full recovery, Pannone said.

The mother was arrested and charged with aggravated assault.

“Thankfully, everything turned out OK,” Pannone said. “He definitely needed his airway opened. I don’t know if he would have survived. He was out cold, totally limp and not breathing.”

The officer credits his training, which kicked in when he saw the boy in peril.

“There are very few things that bother you on this job,” he said. “But one thing that bothers all of us, I think, is when a child is involved. Especially when you have a child of your own — you take that home with you.”


In the line of duty: City police officers honored for exceptional service

originally posted by: olaru12
a reply to: sarra1833

and internal affairs investigations that cover up police brutality and corruption. LEO misconduct needs to be addressed by a citizens review panel.


Thats why i have hard time to find respect to even them good cops, many of them if not all of em knows the bad and corrupted ones and the corruption on the system yet they keep quiet.

originally posted by: sarra1833
a reply to: romilo


Ah i hear ya, ofc there is both sides playing the fields and its good reminder sometimes to look happier side of it than see so much bad side, thats one of my problem, if someone wont remind me sometimes, i seem to see more of the bad side, so i thank for ya reminder and will keep on reading your topic

This is what to serve and protect is all about. Officer Olexa is one of many LEO's out there who care.

To the jaded in the LE community take note.

posted on Nov, 26 2014 @ 10:15 PM
link
I'm not saying that many policemen and women don't perform honorably and are true hero's, but this attitude of
"we vs. them" that is epidemic in law enforcement must end.

Law enforcement needs to rejoin the community of the taxpayers that pay for all their equipment and salaries.
edit on 26-11-2014 by olaru12 because: (no reason given)

Officers who died in the line of duty so far this year is 106. a 7 year average of people who are killed either in custody of law enforcement or by law enforcement is 420.

Yes, this means people are more likely to be killed by law enforcement than law enforcement be killed, but also they are dealing with the dregs of society. They are going after the drug dealers, the bank robbers, the addicts, the murderers and those who would otherwise hurt others. They walk into extremely dangerous situations many times every single day. They do so willingly, in order to have a better and safer society for all of us.

Yes, because of who they deal with they have a tendency to feel as if they have to protect themselves all the time. Even a routine traffic stop could end in their death if they happened to pull someone over who happened to be transporting coc aine or another such situation.

Let this members thread be about good cops. They DO exist, if you only want to talk about the bad one's there is an entire forum for that. Have some form of respect for the wishes of another member.

several years ago I was in north California, and I had to walk from Weed to Yreka (Siskiyou county). A sheriff stopped me and said it was against the law to walk down the highway even though I was well out of harm's way. Instead of giving me a hard time he gave me a 30 minute ride.

As to the thread, you and me both. Ferguson is only out hand because of media and their agendas. So much for the holidays there. Wonder what's going to happen when they have no supplies left to live on.

Back in the '70s I stupidly ran out of gas one mourning heading for work on I5 and a CHP officer actually drove me to a gas station then back to my car so I could get to work on time.

One cool chippy. And yes, I was a long haired hippie.

posted on Nov, 27 2014 @ 12:05 AM
link
A most refreshing thread and I thank you for making it! When I was growing up, our cops were upstanding citizens with kindness and compassion, people we could look up to and count on, People with integrity and honor.

Yeap you can delete my post in this topic, i did not understand what i read at first but topics starter already made it more clear to me what it was about.