At the disposal of Channel One was sensational picture, presumably made by a foreign satellite spy in the last seconds of flight Malaysian Boeing over Ukraine. On the eve of the most important meetings of world leaders at the summit of G20 in Australia, the story of the death of the passengers of this flight is more than relevant. The frame speaks in favor of the version, which in the West is almost never heard. 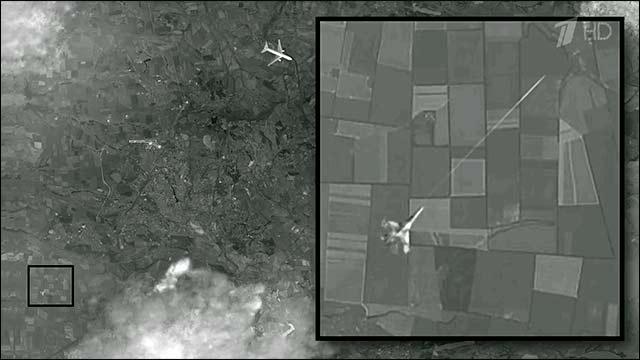 The person who sent the picture, showing how the MiG-29 kills passenger “Boeing”, whoever he was, of course, professional. In order to forge this requires even more professionalism than to access such information. Lord, you have these pictures! Or others! Show them, finally! Hands on the table! Because at the moment there is every reason to believe that the committed state crimes by those who destroyed the plane deliberately and cynically. And those who consciously and cynically hides it with exhaustive information.

satellite photo of fighter jet zapping MG17, courtesy of one george bilt … who he

posted on Nov, 14 2014 @ 12:04 PM
link
Why would he get so close to fire a missile and it looks like the jet is over land so where is the wreckage? I will need some more verification on this one.

MH17 is the one over the Ukraine.

I heard stories that the Ukrainian airforce thought Putin was in the air nearby and assumed this was him...?

One big problem is that they claim the missile was fired "at the cockpit". Missiles don't track on the cockpit, they track on the largest radar return on the aircraft, for a radar guided missile, which would have been the center fuselage. Especially from this angle. A radar guided missile would fired from slightly behind and to the side like this would have homed in on the center or aft fuselage, not the cockpit.
edit on 11/14/2014 by Zaphod58 because: (no reason given)

originally posted by: Zaphod58
a reply to: Hoosierdaddy71

MH17 is the one over the Ukraine.[/quote

Oops lol
There are so many I get mixed up..
Still pretty close for a shot against an easy target.

Not to mention that it would have hit near the center fuselage fired from that angle, not the cockpit.

Was there not wreckage showing fragmentation damage possibly caused by an air to air missile...?

Without extensive analysis there's no way to tell the difference between an air to air, or surface to air missile. But an air to air missile wouldn't have hit near the cockpit, unless it was fired from the front, which the crew would have seen either the launch, or the launching aircraft. A SAM from the ground would be much harder to see unless you were looking for it, and in exactly the right spot, just as it was launched. The damage is consistent with a fragmentation warhead, which both types use.

An infrared missile fired from an aircraft would have tracked on the engines, the center fuselage, or aft fuselage, the three hottest areas of the aircraft. A radar guided missile would track on the center fuselage, which would give the strongest return for the seeker. The cockpit would actually be one of the weakest returns.
edit on 11/14/2014 by Zaphod58 because: (no reason given)

The evidence does suggest that the cockpit was hit by machine gun fire. As for a missile being used and where it hit it is hard to say as the crash debris is still stuck in a war zone.

posted on Nov, 14 2014 @ 12:21 PM
link
I'm having a lot of trouble with certain aspects of this photo and inset. I'll wait for others to verify the source and point out what I am seeing, too.

No, it's consistent with a fragmentation warhead. Russian built aircraft use a 30mm canon. Against an unarmored target, a 30mm armor piercing shell is going to leave a large hole at impact. Those holes are more consistent with either shrapnel, or small arms fire.

I'll have to go way back..
But I thought that the missile was seen raising from the ground to MH17.
And the type of missile was confirmed... to be a mobile launch platform missile if that.

So that being said.
There is no way the mig could have fired it.
Or we were all told misinfo ( surprise ). That it was a mobile launch missile platform only ... thus provided by Russia...

There were reports early on that there were 2 mig's in the area at the time... but the broke away...

And as far a as evidence of fragments were contributed due to shrapnel that burst from the missile..

I have seen a video of Russia recreating the damage similar to that inflicted on one of the large cockpit sections. As for all the technical details I have not personally verified it, but find the argument compelling.

The 10-day NATO exercise code named «BREEZE 2014» has ended in Black Sea. The exercise, which included the use of electronic warfare and electronic intelligence aircraft such as the Boeing EA-18G Growler and the Boeing E3 Sentry Airborne Warning and Control System (AWACS), coincided with the shootdown of Malaysian Airlines Flight 17 in eastern Ukraine, some 40 miles from the Russian border. NATO ships and aircraft had the Donetsk and Luhansk regions under total radar and electronic surveillance.

Which wouldn't include satellite images. Satellites aren't reliable for tracking moving targets. It would have included AWACS, communications monitoring, and other ELINT sources.

The ships involved would have been hard pressed to see MH17 flying over Donetsk. From the edge of the Black Sea to that region it's roughly 360 miles. Any ground or sea based radar would be hard pressed to get out to 250 miles due to the radar horizon. You would need a specialized radar to see beyond that, and that means a huge fixed radar.

An AWACS would have had to be in the region as well, as even that has about a 300 mile range under optimum conditions. When in 360 degree search mode, that range is closer to 200-250 miles maximum.

Notice the use of that one little word in that bolded portion. ASSUMED. They could also be flying fighters pretending to be commercial aircraft over the Black Sea, or monitoring flights as they went over the Sea, or any number of other things that would have been much easier and require less coordination with civilian authorities.
edit on 11/14/2014 by Zaphod58 because: (no reason given)

posted on Nov, 14 2014 @ 12:43 PM
link
I'm Russian and I don't know who did it with the MH17, but this is fake and very bad one. Look at the relative dimensions of the fields and the planes, than use math combined with Google Earth and you'll see that the 'satellite' was hanging about 100-200 metres above the planes. Since there is 50 km between the planes according to the picture, there is no technical possibility to take this photo. Sooo... this is just trolling of our state TV.
edit on 14-11-2014 by tabm1 because: (no reason given)

originally posted by: Hoosierdaddy71
Why would he get so close to fire a missile and it looks like the jet is over land so where is the wreckage? I will need some more verification on this one.

It was a two stage kill; first stage was to shoot the pilots so they can't communicate, second stage is to shoot off the wing to make the plane crash.