After less than three years and spending of 350 million litai ($128 million), an off-shore liquefied natural-gas vessel is anchoring on the former Soviet republic Baltic coast today and will convert LNG into natural gas and pump the commodity to the mainland.

The Baltic state now “can very seriously consider the option of not having any agreements with” Gazprom when the gas supply contract expires, Grybauskaite said.

If running at full-capacity of almost 4 billion cubic meters, the terminal could cover 80 percent of demand of the entire Baltic region, including Latvia and Estonia. The Independence would be able to cover 90 percent of Baltic needs “should our neighbors need this,” 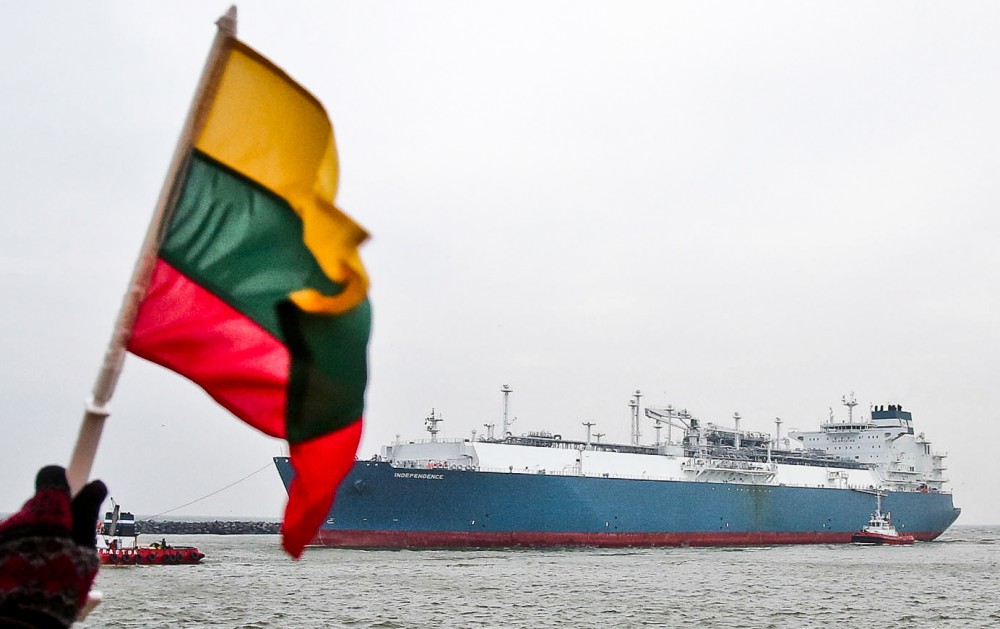 So this is a big deal for Lithuania and the Baltic region (even Finland, the experts say) in becoming fully independent from Russian gas.
For it's strong political stance against Russia in various subjects, Lithuania was paying the highest gas price of all the EU nations, until this year, when Russia, in-reaction of realizing that this terminal will actually see the light of day (which they didn't believe till the last moment), lowered the gas prices by 23%! Now, The European Commission considers this one of the most important projects in Europe's energy security strategy.

Good, and the more countries with the same dependances that do the same the better. Dont expect Russia though to sit by as places like this unshackle themselves from her. Given the rich men and their portfolios that run Russia will lose out on their profits and control im sure something will happen some time in the not to distant future to hinder and or put off others from doing likewise.

Props to them for getting this done...

I know this has been discussed in terms of the Baltic states needing this... Now if the US can get up to par with its exports o Europe can ease off Russia.

This is the one area Putin is lost in... Even with European countries shifting focus to come off Russian energy resources, Putin still states they wont leave and will need Russian gas.

Now if Ukraine can resolve its energy issues...

The Russian economy is taking a pounding from the sanctions. Its something Putin continues to deny while those around him keep warning him there are issues. Russian makes money off its oil exports only if it remains above $96 a barrel. There government budget for 2015 and on raises the barrel price, something which I think is a pipe dream for them right now.


Without the exports and the prices of the exports Russia cannot do the things Putin wants done.
edit on 27-10-2014 by Xcathdra because: (no reason given)

posted on Oct, 27 2014 @ 07:05 PM
link
Good for them but I have to wonder. If they're covering all of their needs, as well as the needs of their neighbors how many years supply do they have? I remember reading fairly recently that Norway is reducing their production due to fears of running out (and cutting some social benefits in the process), and this is coming from the same source isn't it?

The storage allows them to buy more for later use. It also provides needed time for them to find alternate supply sources other than Russia without interruption of their supplies.

This will not make Putin and his band of jolly Russians happy.

posted on Sep, 26 2016 @ 11:39 AM
link
LNG is largely a fraud, which costs 3 times as much as the gas coming through Russian pipeline. No chances for the EU. Only option is Russian gas through pipelines. Demise of south stream coincides with the demise of Italy and the balkan countries.

LNG is not a fraud, regardless of much Russia tries to push that narrative to try and keep their self-perceived stranglehold on Europe. Russia is actually a top exporter of Natural gas so your argument fails there as well. Even more ironic is the dependence Russia has on their gas exports. It is not a question of Europe needing Russia but Russia needing Europe. Russia thought they could use China to shore up their energy market however the trade goals never materialized.

This is another example of Putin thinking it is the 1980's and that he runs the USSR. He is not capable of existing in the 21st century and is doing al he can to revert Russia back to the days of the USSR. The issue there is the Russian people got a taste of freedom when the USSR collapsed and a lot never experienced the product shortages the USSR inflicted on its own people.

I am sure, as a KBG agent, Putin didnt experience the life of the average Russian at the time of the USSR. I am sure Russians remember those days and view it differently than Putin does.

Absent of Putin seizing absolute power his days are numbered.
edit on 26-9-2016 by Xcathdra because: (no reason given)

posted on Jul, 27 2017 @ 03:13 AM
link
Careful, LNG dependency would render the EU, the most dependent area in the world. At any whim of the US, the EU will have to whim with them. Besides,
Juncker is the main brain behind this strategy of rendering the EU absolutely submissive and dependent on the USA. That's his purpose while he sits on that chair. Moreover, costs of LNG is vastly greater than the same quantity of gas coming through a pipeline from Russia or elsewhere.

posted on Aug, 24 2019 @ 08:17 AM
link
There will never be LNG gas delivered to Lithuania ... no not even in Memel !
Besides, that's what happens when Jozef Mengele's instruction to create Islamist Uebermensch are followed by the Lithuanian government.

originally posted by: Flanker86
There will never be LNG gas delivered to Lithuania ... no not even in Memel !
Besides, that's what happens when Jozef Mengele's instruction to create Islamist Uebermensch are followed by the Lithuanian government under direct order of the President of Lithuania.