Why name it ISIL?

posted on Oct, 12 2014 @ 01:11 PM
link
The Levant is the birthplace of Christianity. By naming it ISIL, they are bestowing to it more power than mere earthly political influence,transforming it into a symbol of the destruction of the very foundation of Christendom. In doing so, I think, their goal is to conjure up within the mind of the average Christian imagery of their religion being undermined on a spiritual level. This is not a war of bombs of pamphlets, but a war of spiritual powers and ideas, and the sad thing is both of these monotheistic religions share more in common than they differ when compared to the vastness of all that could possibly be. Honestly, I think this is a classic divide and conquer maneuver and will only lead to the further diminishment of rights for both the people living in the West and especially those living in the Levant.

The French also call them Da'esh, which brings to mind Da'ath. I don't know for sure if there is any connection whatsoever, but if they are trying to allude to the dark sephiroth, this could be a mystical war brought out into the light of day for the first time in centuries. Whatever is going on, we are certainly witnessing history unfold and this could be a pivoting point for human history.
edit on 10 12 2014 by Nechash because: (no reason given)

Of course, you're correct. ISIS, the Islamic State in Iraq and Syria, is bad enough. They aren't a "state' anywhere. They picked the name just to sound important and inspiring. But at least it's better than ISIL. Why our president went with that I have no idea. There are whole sections of the Levant that ISIS has no ability to even look into, let alone threaten.

I don't know what my thoughts are on Islamic State. Very mixed. But if the world starts calling them Islamic State, then that pretty much ends the rabid, thoughtless, believers' idea that Islam is a religion of peace.

The name adds more to the end goals. 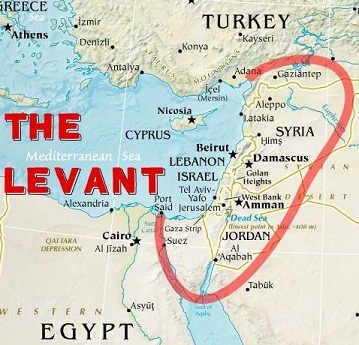 posted on Oct, 12 2014 @ 01:56 PM
link
I am having trouble understanding this threads title? Could you correct it or explain it?

I explained it all in this thread: Dark Goat. Of course, you will need to read the entire thread to get it. If you simply read my last few posts there, you might get an idea. Unity of Christianity, Israel is a strong force that will bring in weak (Islam). Once united, Babylon will be destroyed. Babylon is a system to take. The central thread uniting the other three is Christ. It's the coming triple strand.

The parallel to this next verse is found on all levels. Physics, DNA and our own history shows the pattern emerge. What is burned away is what does not belong. From all levels, this entangled spirit is set out and separated from the whole. How? Unity of three.

8 There was a man all alone;
he had neither son nor brother.
There was no end to his toil,
yet his eyes were not content with his wealth.
“For whom am I toiling,” he asked,
“and why am I depriving myself of enjoyment?”
This too is meaningless—
a miserable business!

9 Two are better than one,
because they have a good return for their labor:
10 If either of them falls down,
one can help the other up.
But pity anyone who falls
and has no one to help them up.
11 Also, if two lie down together, they will keep warm.
But how can one keep warm alone?
12 Though one may be overpowered,
two can defend themselves.
A cord of three strands is not quickly broken.

No problem. I'm afraid if someday someone analyzes all of the syntax errors I make when in this state of thought, they will unravel the core programming flaw that lead to my anomaly. ;p

originally posted by: charles1952
a reply to: xuenchen

We know they would *Love* to overrun Israel.

It's happened in ancient times, but those were times without global military defense.

IMO, this whole thing is about the natural gas pipelines that don't exist yet.

And the secondary issues with the Sunni/Shi'ite conflicting interests.

What happened to Duffy's? Why did they close the thread?

It is against ATS rules to mention Duffy's or Hernando's. Send me a U2U. It is in your best interest to not mention those again.