Marijuana is the most commonly used illicit drug in the United States, but little is known about its effects on the human brain, particularly on reward/aversion regions implicated in addiction, such as the nucleus accumbens and amygdala. Animal studies show structural changes in brain regions such as the nucleus accumbens after exposure to Δ9-tetrahydrocannabinol, but less is known about cannabis use and brain morphometry in these regions in humans. We collected high-resolution MRI scans on young adult recreational marijuana users and nonusing controls and conducted three independent analyses of morphometry in these structures: (1) gray matter density using voxel-based morphometry, (2) volume (total brain and regional volumes), and (3) shape (surface morphometry). Gray matter density analyses revealed greater gray matter density in marijuana users than in control participants in the left nucleus accumbens extending to subcallosal cortex, hypothalamus, sublenticular extended amygdala, and left amygdala, even after controlling for age, sex, alcohol use, and cigarette smoking. Trend-level effects were observed for a volume increase in the left nucleus accumbens only. Significant shape differences were detected in the left nucleus accumbens and right amygdala. The left nucleus accumbens showed salient exposure-dependent alterations across all three measures and an altered multimodal relationship across measures in the marijuana group. These data suggest that marijuana exposure, even in young recreational users, is associated with exposure-dependent alterations of the neural matrix of core reward structures and is consistent with animal studies of changes in dendritic arborization.

From what my pea brain can asses from his article is that it negatively impacts the brain in younger people.

I'd appreciate someone else coming in and making this more understandable to a layman please. And I would like to see a debate about the facts present in the article.

Compare long term cannabis use versus long term use of Adderal(salts of amphetamine, aka kiddie meth), the stuff they prescribe children for ADHD, then we can have an intelligent debate.

Those who want prohibition to continue are merely grasping at straws at this point of the L debate.
edit on 9-9-2014 by jrod because: addon

No more than religious indoctrination on a young brain negatively impacts them...

I loved research class and have taken both undergrad and graduate courses in it...I will take a gander at the whole article and get back to you on it.

But, they do seem to claim this based on their findings. With that said, however, it does not make it 100% fact and there are many, many reasons why their claims may be found to be incorrect.

But, I'll have to read the article in its entirety and probably do a bit more digging until I come up with an opinion on this.

Thanks for sharing, it'll give me something to do tomorrow!

I will have to see if I can't get it printed off at work tomorrow...seems you have to have a paid account to access the entire article.

Wonder who else this Dr. John Kelly works for?

I'm interested in what you researchers bring to light I'll be watching this thread closely.

Do you know anyone in college? They'll be able to access the full article for you. I use this trick to access academic articles. I would like to be able to email it to you, but I am afraid I would be opening the door for anyone to ask me to do this, and that could be overwhelming.

But yes, more research is showing Cannabis use in youth can lead to some brain damage, usually because the brain is still developing. Like everything, the degree of which, and probably at all, depends on the individual person I am sure. The actual dangers all seem to be associated with youth. Some persist for adults, but dramatically less and none that a reasonable adult couldn't make the determination for themselves of that risk.

thesmokingman
+4 more
posted on Sep, 9 2014 @ 12:57 AM
link
Well thats why it is not legal nor condoned for the young. You must be 21 years of age to purchase or possess it where it is decriminalized. Besides, I am not really buying this as MANY, MANY, MOST users started smoking it when they were young. More people than you think are avid users. The proof is in the dispensaries. You will see/meet people from all walks of life. Including very upstanding looking members of society.

posted on Sep, 9 2014 @ 12:57 AM
link
Has there been any similar studies with caffeine on developing brains? Was cannabis only consumed by smoke inhalation in this study?

Simply breathing polluted air in an inner city full of smog can affect one's brain development. The bottom line is we have faced almost a century of bad policy concerning a certain plant. That plant was demonized using a propaganda campaign.

I do not see any harm in making a non-toxic plant legal.
edit on 9-9-2014 by jrod because: add+subtract

ETA: for transparency and clarity so no one is confused on the below remark, jrod's comment was originally in reply to my above comment he later edited to remove the reply to line.

Why are you replying to me like that? I said nothing of the legality of Cannabis. I mentioned what some studies I have read state. I stated nothing of my position on the matter so why are your statements pointed to sway me toward your position.

###SNIPPED###
edit on 9/9/2014 by AllSourceIntel because: ETA
edit on Tue Sep 9 2014 by DontTreadOnMe because: Terms and Conditions of Use--Please Review

posted on Sep, 9 2014 @ 01:09 AM
link
I don't think the (slightly) detrimental effects of cannabis use on child development is news. No one (that I know of) who advocates legalization thinks it's a good idea for kids to use it.

If the prohibitionists are simply worried about the potential of use by children and adolescents, well... how about the potential for alcohol abuse (one of the most dangerous substances known to man, sold on every street corner in America)? Their argument doesn't hold any water because the moral contradiction is glaring. But they've gotten away with it for so long that they're continuing to ignore the hypocrisy while more and more people are seeing it clearly.

It isn't working anymore. Grasping at straws, as another member noted, in an odd, arrogant desperation.

Swimming can be dangerous

posted on Sep, 9 2014 @ 01:16 AM
link
The war on marijuana is and always has been a lie, it should be legalized and in that process it could probably be monitored better if required.

A simple comparison, different strains of marijuana produce different effects eg. some produce painkilling efects or can act as a sedative while others promote creativity annd awareness. Compare that to alcohol, KILLS braincells and can make people violent

I leave you with this shocking picture to contemplate my words: 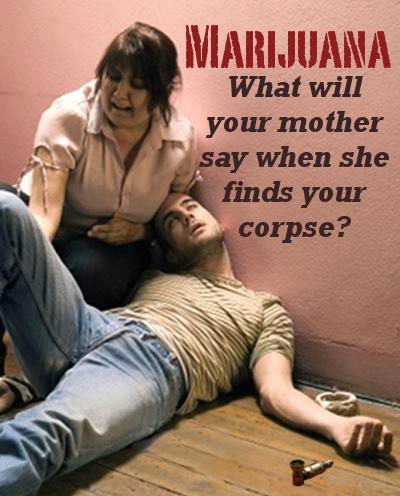 Stay off drugs hahahaha
edit on 9-9-2014 by Zcustosmorum because: (no reason given)

originally posted by: NthOther
I don't think the (slightly) detrimental effects of cannabis use on child development is news. No one (that I know of) who advocates legalization thinks it's a good idea for kids to use it.

If the prohibitionists are simply worried about the potential of use by children and adolescents, well... how about the potential for alcohol abuse (one of the most dangerous substances known to man, sold on every street corner in America)? Their argument doesn't hold any water because the moral contradiction is glaring. But they've gotten away with it for so long that they're continuing to ignore the hypocrisy while more and more people are seeing it clearly.

It isn't working anymore. Grasping at straws, as another member noted, in an odd, arrogant desperation.


any drug has its pitfalls especially when abused.....there is no doubt dope has it downfalls like lack of motivation,some people develop psychosis to name a few,but it is far less a problem than alcohol is and that is legal...go figure...

i believe it has something to do with the prison system,they make money from it and until they figure out a way to tax it we are stuck in this ....and of course big tobacco and big alcohol are no doubt lobbying against it

i knew a guy who was an alcoholic and his doctor told him to smoke more pot and drink less,he will live longer

I didn't say it was dangerous, I said "the dangers," meaning the plausible negative side effects that may arise. Like you implied, there are dangers with swimming. There are dangers in everything, even sitting here typing out this post. That does not mean that dangers associated with something makes it dangerous.

The study is basically highlighting evidence that cannabis usage can cause structural changes in parts of the brain. These changes are occurring in areas where addictive behaviours are commonly sourced. Ergo cannabis is addictive...

Dendrites are those little branched structures we see that link to neurons and transmit electrochemical simulation. The amygdala is that part of the brain that's concerned with pleasure, reward and aversion. The study is pointing out that people who don't use cannabis have fewer (less dense) dendrites in areas of the amygdala compared to people who do.

By using young people, they've got a better chance of cleaner results. For example, people who drink or smoke will also have higher densities of dendrites in the 'reward/aversion' area. It's likely that their samples were taken from young people who don't drink or smoke tobacco regularly or the results would be open to interpretation.

tl/dr - study suggests that cannabis can be addictive.

You were the last post...when I hit reply. It wasn't directed at you as an attack.

posted on Sep, 9 2014 @ 01:27 AM
link
I have seen many young people who Started smoking it in their early teens get mental health problems by their late teens..
Just the same as booze... solution is don't let kids have it.
But as your brain matures it is much less harmful.

I am not trying to make you look like a donkey, I am clarifying lines of communication. I didn't take it as an attack, I didn't understand why the statements would be in reply to me, but you just cleared that up, thank you.

Yes, the house is falling, more states are considering ballot measures in November and more will in 2016. Yes, it should have a long time ago, I want to smoke my bowl in peace.
edit on 9/9/2014 by AllSourceIntel because: spelling