NASA Commits to the SLS; Unmanned test flight of SLS/Orion around moon within 4 years (2018).

posted on Aug, 28 2014 @ 08:26 AM
link
On Wednesday (August 27, 2014) NASA has formally committed $7 Billion to their new "Space Launch System" (SLS) heavy-lift vehicle.
With the commitment to building these larger launch vehicles, NASA is still eying a manned trip to Mars in 20 years or so:

Our nation is embarked on an ambitious space exploration program, and we owe it to the American taxpayers to get it right,” said Associate Administrator Robert Lightfoot, who oversaw the review process. “After rigorous review, we’re committing today to a funding level and readiness date that will keep us on track to sending humans to Mars in the 2030s – and we’re going to stand behind that commitment.

Source:
NASA Completes Key Review of World’s Most Powerful Rocket in Support of Journey to Mars


Before they can think about getting to Mars, they need to build and test the SLS vehicles that will help get them there. That's what they committed to yesterday -- building the launch velicle that will get humans beyond Earth, to asteroids, and eventually to Mars. As part of that process, they hope to have a 2-week long shake-down test flight of the SLS and an Orion capsule to the Moon and back by 2018.

After a detailed engineering and cost analysis, NASA managers have formally approved development of the Space Launch System -- SLS -- heavy-lift rocket, the most powerful booster ever attempted and a key element in the agency's long-range plans to send astronauts to nearby asteroids and, eventually, Mars, officials announced Wednesday.

The SLS development program is projected to cost $7 billion from February 2014 through the rocket's maiden flight, a November 2018 test launch carrying an uncrewed Orion multi-purpose crew vehicle, or MPCV, on a three-week-long shakedown mission beyond the moon and back to an ocean-splashdown on Earth...

...The first SLS launch in 2018, known as Exploration Mission 1, will send an uncrewed Orion capsule into a stable orbit beyond the moon and then "bring it back to Earth to demonstrate the integrated system performance of the SLS rocket and Orion spacecraft's re-entry and landing prior to a crewed flight," NASA said in a fact sheet.

The second SLS flight -- Exploration Mission 2 -- will be a crewed voyage carrying four astronauts beyond low-Earth orbit for the first time since the Apollo program.

That date for the first flight is one year later than originally planned, but that date is a 'best practices" date, and time built into it for solving expected issues. However, if those expected issues are solved moire quickly than expected, the SLS could fly sooner than expected.


When all of those factors were included, along with input from an independent review panel, computer analysis indicated a 70 percent chance of meeting the November 2018 target date. That was the goal in a "best practices" approach to program management.

"If we don't do anything, we basically have a 70 percent chance of getting to that date," said Bill Gerstenmaier, NASA's associate administrator for space operations. "Our intent is to go look at those (expected) problems and see what we can do to mitigate (them)." 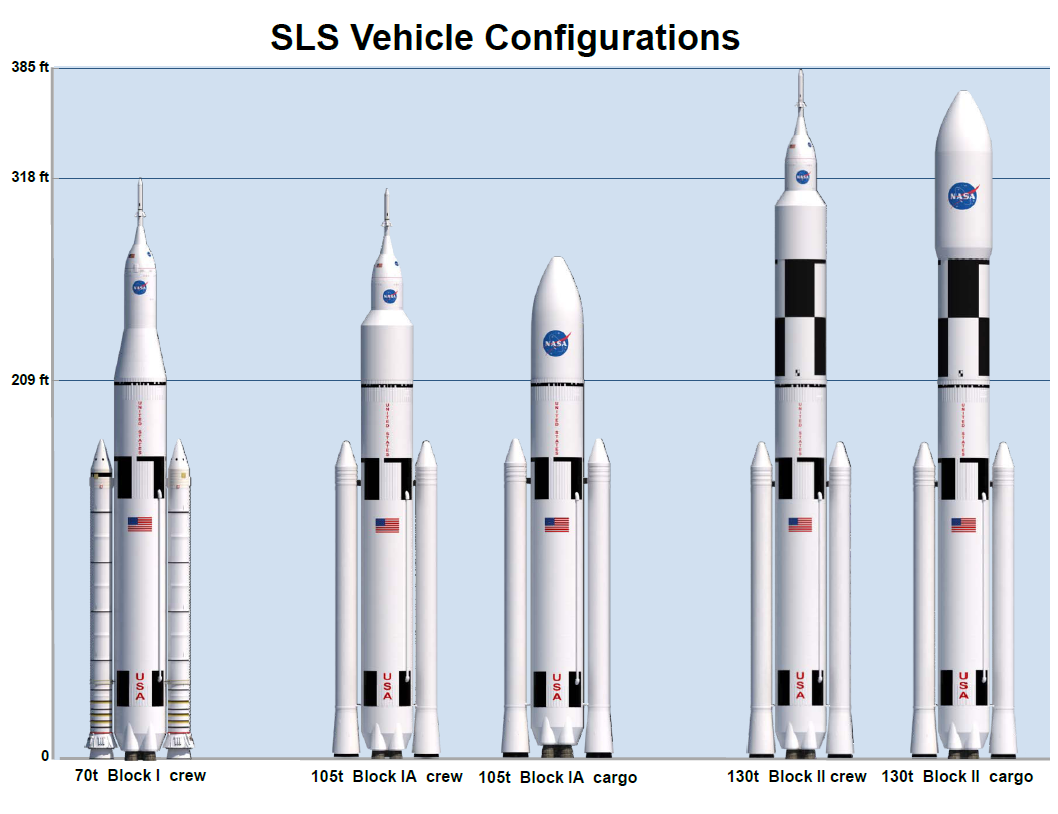 posted on Aug, 28 2014 @ 08:31 AM
link
Just a note to say that Asteroids are further away than mars, so I presume Mars would be first, asteroids second?

posted on Aug, 28 2014 @ 08:46 AM
link
A: not that this is what they're planning or anything, but we think the asteroids are a better target prior to mars, if just because there are less gravity well issues to deal with for a return trip. Plus think of the souvenirs, how many usable resources are just drifting around in asteroid form out there?
Interesting that NASA is 'officially' commited but we won't be getting excited about it until public testing commences...

originally posted by: intrptr
As I recall, one of the lauded missions for the Shuttle and ISS was to be a 'platform' for further exploration, too.

The ISS has been a great stepping stone towards long-duration manned mission, such as to Mars.

The information about how a human could live in space for extended periods of time that we have learned on the ISS is invaluable. The ISS has not only been a laboratory for testing how the human body reacts to long durations in space, but also methods on how to hopefully minimize the detrimental effects. It is also a test-bed for the types of hardware (crew facilities) that might best serve a long-duration trip to Mars and possibly beyond.

In addition, the information we have learned about building and maintaining a vehicle on orbit has been very important, too. The vehicle we send to Mars (and someday beyond) will probably be too large for a single launch, so it will need to be assembled in pieces in space. The experienced gained by building the ISS in space and maintaining it in space has prepared NASA to do something similar for a Mars cruise vehicle.

Yeah. Just what we need another massive, inefficient rocket design in the works. 'Almost makes me believe that the black triangles really are alien craft and not something out of the Skunkworks.

Granted about lessons learned. Primarily that man is unfit for anything less than a 1 G well for extended periods.

When I said that the ISS was intended to be a 'platform' i meant just that. A "space dock" to build deep space exploration craft and launch them to the moon, mars, whatever. The shuttle was to ferry parts for assembly up to the ISS ad then launch from there.

That was what I was told in the media, anyway. I can't find a link but thats NASA (Never A Straight Answer), covering its tracks.

Sorry Soylent, I value certain aspects of space exploration as much as you, just not the "manned" waste of dollars.

Except, if these black triangles exist they are most definitely not Super secret black ops tech. Some one else some where would have to come up with their own versions and have it come to the sight of the general public.

It's just not the case.

Sounds like they're stalling for time so "they" can clean up Mars before we get there. Can't have any other human footprints!


Not a number cruncher, but from observation…

You are right about ground lifting of complete vehicles as opposed to assembling them in space. The way they went to the moon the first time is the chosen method because it is the most efficient. Thats why they did it that way. if you want to go to the moon that is the way it must be done.

The fuel to get to orbit, dock, transfer and then undock, and climb out of the gravity well of earth is more than just directly launching to to higher orbit and "nudging" the craft to escape velocity (i think… i'm pretty sure?)

originally posted by: eriktheawful
a reply to: pikestaff


There are even a couple NEOs which follow the Earth in its around the Sun. These are sometimes called quasi-moons of Earth.


It all depends on the size of the craft being assembled. Some things which would be very useful in manned interplanetary missions would be impractically large. Too large to be launched from Earth.

It is inevitable that future interplanetary missions will be assembled from orbit. We have very good experience assembling a large spacecraft in orbit.

It's called the ISS.

When in-orbit or off world assembly really will take off is when we begin mining asteroids or the moon to use resources from there to create the materials used for the spacecraft. At some point it will become cheaper to build stuff from materials in space than launch out of the Earth gravity well.

originally posted by: JadeStar
It all depends on the size of the craft being assembled. Some things which would be very useful in manned interplanetary missions would be impractically large. Too large to be launched from Earth.

Yes. I think any vehicle in which we would be sending humans to Mars for a mission that involves a landing would be too large to launch in a single lift with the current heavy lift vehicles planned for the foreseeable future. It will need to be launched in pieces and assembled in space, like the ISS was.

...To put it another way, anything that can be launched in a single lift using the SLS heavy lift vehicle or the Falcon 9-Heavy would be too small to send humans to Mars if you want them to be in relatively good physical and psychological health when they get there.

I'm not saying it will be as big and complex as the ISS, but it will be at least a few pieces placed in orbit by multiple launches that will require some assembly in space. The invaluable knowledge we gained by designing the ISS modules and assembling them in space will prove essential to putting together ta future Manned mars Mission vehicle -- and maybe just as important will be the knowledge that we have gained in repairing the ISS in space. It is very possible that the crew of the Mars vehicle may need to do repairs outside the ship in-situ while in the way to Mars.

SpaceX's plan is to use a craft launched by a single, massive rocket (something with roughly twice the thrust of the Saturn V). It will probably refuel at a fuel depot they put at an Earth-Moon Lagrange point before going on to Mars, but I wouldn't call that "assembly." The whole thing will then land on Mars, with no need to leave any part of the craft in orbit around Mars. Putting things in orbit around Mars is very propellant-intensive compared with just directly landing on the surface.