good luck trying to fully understand what they're saying.

Wow, congratulations on using the most completely erroneous argument to date on this thread. You are officially admitted into the "next level bull#" club.

Just dug up in the 1800's means archaeologists didn't even think it really existed until then. Let alone had any historical records, texts, any linguistic evidence or analysis at all. What in the hell does this have to do with John Adams writing books in the 1800's?

Here's something else they had back then: a dictionary. "u" is spelled "you" and "r" is spelled "are."
edit on 29-8-2014 by BridgebyaFountain because: (no reason given)

let that sink in,,
too find that which does not exist, according too the best minds of the Day.

and they found it.

What in the hell does this have to do with John Adams writing books in the 1800's?
might have been influence by it,, after all he was rather learned.

originally posted by: BobAthome
let that sink in,,
too find that which does not exist, according too the best minds of the Day.

Yes, happens all the time. Just like when people are convinced they understand a language from a very ancient civilization that was unexpectedly dug up less than 200 years ago. Who's to say they're not just full of some next level bull# again?

u make it sound like "discovery of the unknown" too known is ,,impossible?? not within mans abilities?

You make it sound like you're not even reading what I'm posting.


originally posted by: Ridhya
Stay away from ancient aliens sites, they notoriously mistranslate things to suit their needs.

How would you know? Because you already know the ancient alien sites are wrong so you start from that conclusion and make your theories based on it?

If you study Greek and Latin etymological roots of words you'll already see how rapidly and totally words change meaning just from one or two languages away. People have to study the use of the word in different regions across spans of time just to realize why words change in such ways and make sure that it's really even the same word. When you're talking about an entire civilization that was only dug up in the late 1800's and still isn't well understood at all, good luck trying to fully understand what they're saying.

i read every word. even the final or closing argument,,good luck trying to fully understand what they're saying.[

posted on Aug, 30 2014 @ 12:19 AM
link
Go study translations from ancient Greek and Latin and the debates around them, and why various translations differ. And consider that Greek and Latin have known, unbroken historical relationships with many languages spoken today (modern Greek, French, Spanish, Italian, English, etc.) since over 2000 years ago.

Over 2000 years of time to study the evolution of these languages and better be able to translate them from one to another, from various times. And still disagreements, debates, and open questions.

You think we'll discover more unknown things in the future? Me too, like the discovery that these clowns didn't even know how much they didn't know about the Sumerian language, or Egyptian hieroglyphs for that matter.

What are you even trying to say anyway? That people DO already totally understand the ancient Sumerian language and it's case-closed now on their writings? I can't even tell if you're trying to make an actual point or just trolling the thread for the next level bull# of it.
edit on 30-8-2014 by BridgebyaFountain because: (no reason given)

Are you theorizing that our DNA was programmed with this language by a divine and or outside intelligent creating source?

posted on Sep, 1 2014 @ 11:28 PM
link
a reply to: BridgebyaFountain
Nope, because they change the scholarly translations to suit their needs with no reason necessary.

I dont disagree with what you said about understanding languages, that it's difficult even with context, but we do understand quite a lot. It is all interpretable, but linguists dont base it on nothing, like you seem to think... its based on decades of study, comparison to early pictograms, comparison to contemporary and later languages, etc.

By the way Ancient Aliens has outright lied on a number of their shows. About Constantine for example.

originally posted by: TheIceQueen
This is very interesting although I'm not quite sure that I understand it 100 percent (I skimmed through in my reading).

Are you theorizing that our DNA was programmed with this language by a divine and or outside intelligent creating source?

Maybe the action of DNA with its codons and transcription has transposed itself into our thought processes.

A fractal is a never-ending pattern. Fractals are infinitely complex patterns that are self-similar across different scales. They are created by repeating a simple process over and over in an ongoing feedback loop. Driven by recursion, fractals are images of dynamic systems – the pictures of Chaos. Geometrically, they exist in between our familiar dimensions.

Which could mean that metabolic pathways in cells and neural networks in brains are also similar in schematic.

And that we are limited in our view of reality to the analogies of the ways our chemicals react.

PS
Biology theorizes "Emergent Properties". Some of our mental ability is probably completely different from our chemistry.
edit on 3-9-2014 by Semicollegiate because: (no reason given)

originally posted by: Ridhya
By the way Ancient Aliens has outright lied on a number of their shows. About Constantine for example.

I watched only maybe a couple of episodes of that show but I'm curious. What did they say about Constantine?

posted on Sep, 4 2014 @ 08:34 PM
link
a reply to: BridgebyaFountain
They said that he witnessed a cross of light in the sky that helped him win a famous battle, and the cross was probably UFOs in formation.

They failed to mention that what he witnessed was a cross composed of the first two letters of Christos, Chi and Rho combined. They also failed to mention it was accompanied by words written in the sky "In this sign conquer". 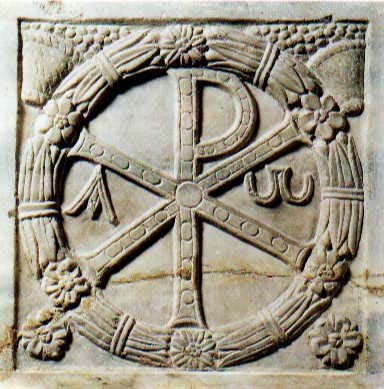 They also failed to mention that it was a dream.

But was the cross-shaped object Constantine claimed to have seen in the sky really a sign from God? Or might it have been some other extraordinary force?
Bramley: It looked like they are in a shape of a cross but a shape of a cross could have been air plane type objects, because the fuselage and the wings would look like a cross to somebody who's looking up. Of course they had no concept of these things back then.
Chris Pittman: There were other signs important that were seen around the same time, they were described as a crucifix in the sky. If these were to appear in the sky today, we would describe them quite differently.
Tsoukalos: Is it possible that Constantine instead of actually having seen a cross floating in the sky, actually saw a type of an extraterrestrial craft? Is it possible that Constantine won because the extraterrestrials were siding with Constantine and thus altering mankind's history forever?


If the show wanted to talk about ancient Roman accounts of what we would call UFOs today then they would have no problem without referring to this event. I remember reading about that event in Eusebius's "History of the Church." Anyway it's a show aimed at drawing in an audience and attention to itself, whether positive or negative. The best thing about the show is that a subject like this has such a mainstream target audience in the first place. Twenty or thirty years ago I don't think you'd even see things like this on TV. And I'm not saying that people back then were any smarter than they are today, either.

You're right, it's entertainment, and they spam the noncommittal words like 'possible' so that they can claim that its scientific and all, the thing that angers me is that its on the history channel and it never has counterpoints by real scientists (archaeologists).

Also 20 years ago alien programs abound! Remember alien autopsy was in 1995 or something? Can you believe that was 20 years ago?!