posted on Aug, 27 2014 @ 06:31 PM
link
In 2013 ALS had a total combined revenue of 64 million dollars. 10% or 6 million of that was used for research. Another 40 million (62%) was used for "other program activities". Ice bucket challenge raised 88 million and growing so today, 8 million will go to research and 52 million will go to "other".
The complete annual report for your reference. I'm just the messenger. 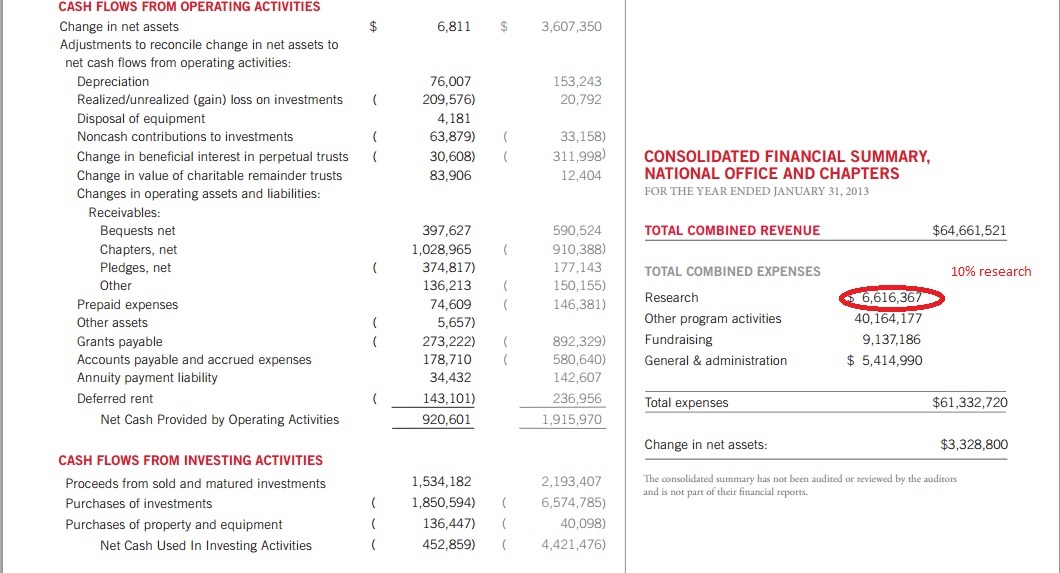 People should go buy groceries for a food bank. Or give money to places that pay electric bills. Something that the local community will benefit from. Not a director in a fancy office.

Their "research" overhead cost just a little more than their "administrative" costs. So for every $100 donated, $10 goes to research and about $8.37 goes to administrative. What are they paying their scientists, $20 an hr?

posted on Aug, 27 2014 @ 07:14 PM
link
a reply to: FlySolo
Idk but, this is why people stopped giving. This is why I prefer to give my time. I'm also broke so my time is all I can spare. I hope this issue gets more attention.

an unpopular thread so it seems.

Naw...it's just seeing people throw ice water on each other is more entertaining.

I believe most folks honestly think they are doing a good thing. Finding out they got hoodwinked is not popular.

It's entertaining reading about ones like the 400 gallons dropped out of a plane on a dare devil. What could go wrong?
Ya, the hoodwinking can be hard to digest. It's going to take some time.

posted on Aug, 27 2014 @ 11:34 PM
link
Don't be too quick to judge ALSA as a scam. It's actually doing very well as a charity, and spending a considerable amount/percentage on it's stated goals of Patient Care, Public Awareness, and Research. While the numbers from the yearly report look bad, it's just simply a problem of misinterpretation. For instance, 17 million of the 64 million went towards replacing 17 million spent from the previous year. That's how non-profits work, they try to have a sizable amount of liquid assets at all times, and are sometimes required to depending on their charters and other agreements. For ALSA, that number is 17 million. They actually spend 72.4% on their stated goals, not 10%.
See: Charity Navigator: ALSA

As far as the scams of charities, the problem isn't usually the charities themselves but the companies that handle telecommunication, mass mailing, and other fundraising techniques. If someone calls you "On behalf of ABC charity", you can bet the charity only sees 5-10% of that money. Why? Because the company you're dealing with is For-Profit working as a contractor for a Non-Profit. Deal with the charity directly and it will more than likely go to where it is supposed to go.

Also, ALSA does have an option when you donate to have 100% of your money be earmarked for research. Of course it takes some faith that this is what's actually going to happen.