page: 1
37
<<   2 >>
log in
join
share:
xuenchen
+22 more
posted on Jul, 31 2014 @ 07:57 PM
link
Well thanks to Judicial Watch, a U.S. District Court has ruled to make Obama and Holder actually release those oh-so "sacred" Fast & Furious documents that were so arrogantly suppressed by Obama under his feeble and snotty "Executive Privilege" claims.

Congress will (hopefully) get a look at what has been selectively covered up by the Obama Administration.

Maybe now we will get to the real truth behind the Fast & Furious operations as well as the illegal things.

I don't know if the Justice Department can or will appeal.

But this sure puts a dent in Eric Holder's Contempt of Congress snubbings.

On Thursday, the U.S. District Court for the District of Columbia offered a ruling that will allow Americans greater insight into the Fast and Furious scandal and the Obama Administration that has repeatedly promised to operate as a model of transparent government.

Thanks to a Freedom of Information Act lawsuit by the government watchdog group Judicial Watch, the court ruled on Thursday that documents that have previously been withheld from Congress under a flimsy pretense of executive privilege must be turned over to Congress.

“Once again, Judicial Watch has beat Congress to the punch in getting key information about another Obama scandal – this time, the Fast and Furious outrage,” said Judicial Watch President Tom Fitton. “A federal court has ordered the Obama administration to produce information that could, for the first time, provide specific details who in the administration is responsible for Fast and Furious lies to Congress and the American people. This is a battle that put Eric Holder in contempt of Congress, saw Nixonian assertions of executive privilege by Barack Obama, and a hapless Congress in face of all this lawlessness. Finally, we may get some accountability for Border Patrol Agent Brian Terry and the countless others murdered as a result of the insanely reckless Obama administration program.”

I have a feeling what existed when this fight began won't be anything like what is handed over in the end.

originally posted by: MrCynic
So how many hard drives will we hear crashed this time?

I have a feeling what existed when this fight began won't be anything like what is handed over in the end.

That's probably what will end up happening.

But it sure will expose the willful disregard of the law by the Obama LLC.

[ as Holder takes off white glove and slaps Obama ]

posted on Jul, 31 2014 @ 08:37 PM
link
They won't give up anything good and everyone knows that. The IRS emails were Just a drill to see how fast they can sweep stuff away. The sad thing is that it always works

posted on Jul, 31 2014 @ 08:40 PM
link
It may just be impossible to see a sitting or even former president convicted of crimes. It is hard to see how that comes to be, and what then? "Mr. President" becomes "Prisoner 382649" or something? It's a bit silly to consider.

Mr Holder on the other hand? He is just a political hack in an appointed position. I think of the red shirts in old Star Trek episodes. Recall them? That is the President's Cabinet for politics. Red shirts for all as Obama beams down to another scandal. This one going for part 2.

I wonder what goofy excuse they will pony up and then look shocked when the American people loose their minds over the corruption... ok maybe I am aiming high that this ADD country will have enough people remember this criminal act and actually be outraged.

This also involved the use of executive privileged, which this court just set precedence in stating it cant be used to cover up criminal wrong doing.

I would rather have the last 2 years dealing with Biden than Obama. I also think Biden might actually be better than Obama given the cirsumstances.
edit on 31-7-2014 by Xcathdra because: (no reason given)

The White House is scrambling right now as we speak.

Great news, I will believe it when I see it...no appeals left?

Regardless I'm sure the media will minimize it...good time to bring up Ebola...that will turn everybody's attention..a boarder guard shooting a illegal would also be a logical distraction...

posted on Aug, 1 2014 @ 12:24 AM
link
The Obama Admin and Eric Holder have used every trick in the book to cover up illegal activities, and they have been caught doing it, but somehow every check and balance we have is either ignored or doesn't seem to apply to the most criminally negligent administration in US history.

Since the material they DID release about fast and furious before revealed crime and negligence which got people killed, they still kept most information from the public, so it is highly likely that most or all of the information will reveal politically motivated abuse of many laws, (which for all of us except for our USA leadership means crimes and law breaking)..

Every single mandate, agenda, program, that the current administration with the crime covering bag man Eric Holder enacts, does, or has done, most likely has laws that were broken in order for them to realize their intended outcome. So far everything they have done that has been exposed always seems to proves this out.

The only thing worth doing at this point in my humble opinion, is to GIVE them court instituted SHOCK TREATMENT! Nothing else has worked, They cannot tell the truth, or even do anything that isn't tainted with deceit, treachery, betrayal, treason, and just plain old murder and negligent homicide!. So it is time to get those mad scientist type shrinks all together and do the extreme treatments for psychopathology and (pick any sociopath or narcisist mental disorder), and then force them to submit to treatment.
When finished they will mumble and drool quite a bit, but that will be so much safer and won't threaten national security anymore, like everything that they do now, does. 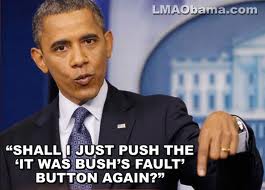 You know the Faithful will be here shortly Screaming it all started with Bush,,,,, it's Bush's Fualt!!
It's a Right Wing Hate Feast,,,
As obama leaves on another vacation, his aide whispers in his ear,,,,, 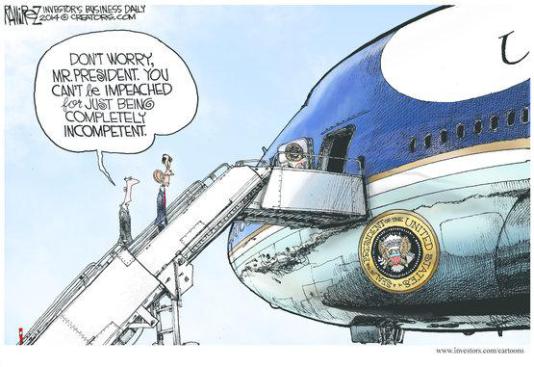 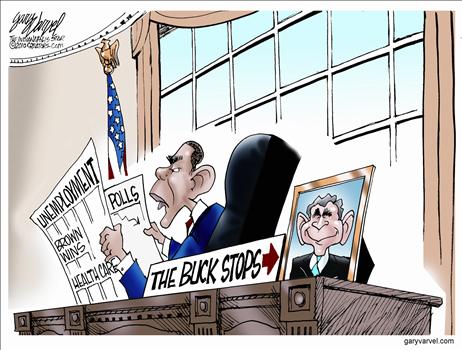 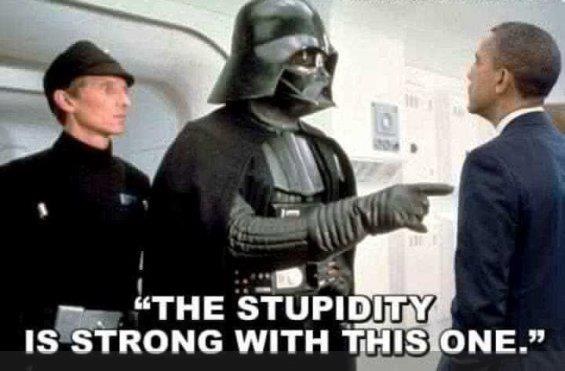 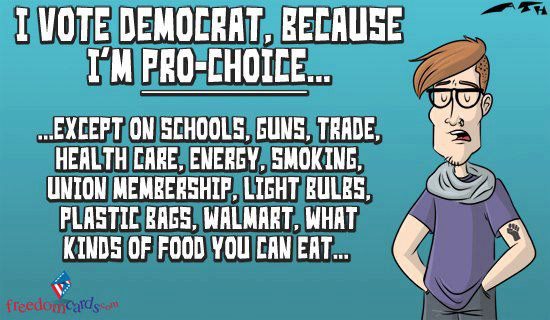 As much as I would like to see people held accountable for this, there won't be any evidence left to do so with.

Unfortunately you are absolutely right. Nothing will happen- even if there is damning evidence in there, congress will him-haw around and complain that something should be done.

How much will we stand for? I can now see how someone like huissein or Castro, Stalin or hitler could control the people so easily..... Slowly chip away at everyone's rights, so they either don't notice, or if they do they just complain that someone should do something. Keep breaking laws, lying, cheating, and smooth talking until the people start to ignore it because "it will never change". Then all of a sudden another country looks over and can plainly see the atrocities we hadn't noticed because we were numb to it, were too scared to stand up against, or sat around waiting for someone to do something about.

I'm in no way comparing the current American situation to those evil empires, but I can definitely see us going down that road if something isn't done.

What do you say, ATS? Can we find a leader among us, someone who will rally the troops and take back this country? Obviously no one will do it for us

(The author of this post is a black democrat who voted for Ovomit, so please don't associate those three issues with my anger. Yes we all make mistakes)

posted on Aug, 1 2014 @ 08:42 PM
link
Obama is a criminal, so is Holder. That said, so were Bush and Cheney and I'm not talking about quasi criminals.... I'm talking about full blown, domestic terrorist, treasonous criminals.

Those documents you are mentioning will never be seen as they once existed because if they were, well, they just can't have that. For one moment pretend they were, who exactly is going to arrest the head of the DoJ and the POTUS?

There is no precedent for it, it would set the stage for a coup or mass anarchy. My God, I can't imagine the full ramifications although I would be willing to deal with it to see a measure of justice done to these cowards.

originally posted by: Helious
Obama is a criminal, so is Holder. That said, so were Bush and Cheney and I'm not talking about quasi criminals.... I'm talking about full blown, domestic terrorist, treasonous criminals.

Those documents you are mentioning will never be seen as they once existed because if they were, well, they just can't have that. For one moment pretend they were, who exactly is going to arrest the head of the DoJ and the POTUS?

There is no precedent for it, it would set the stage for a coup or mass anarchy. My God, I can't imagine the full ramifications although I would be willing to deal with it to see a measure of justice done to these cowards.


Strong and ominous words, Helious.. but there is a degree of
willful evil even domestically driven now, that makes the change
required to get our country back sadly necessary. I hold no faith
at all that the system is integral enough by now to self-police...
as much as I like people like Trey Gowdy, they aren't enough.

I'm a Libertarian, but not even a benign anarchist. If that sounds
contradictory, so be it. But when the hill echoes from the sound
of the guns on the other side we never had a choice did we?
I accept the blame for not warning enough of us in time, or
loudly enough. As a consequence things may possibly need to
get much louder to get results.
from an undeserving but mobile piece of non-furniture

Or will there be a convenient HD crash as in the IRS scandal?

originally posted by: Helious
There is no precedent for it, it would set the stage for a coup or mass anarchy.

Just a sidenote: aren't you confusing anarchy with chaos? America is most certainly not nor will it be an anarchy soon. Anarchy is order without power. You seem to have exactly the reverse over there.

posted on Aug, 2 2014 @ 05:29 PM
link
Yet another "chance" to hope for. Everyone knows Obama and gang are criminals. They only ones who disagree are the ones that know they are criminals, but agree with the crime.