UNESCO’s Masterpieces of the Oral and Intangible Heritage of Humanity

posted on Jul, 30 2014 @ 07:46 PM
link
I am of the opinion that the United Nations was formed not to bring peace to the world, but to facilitate the New World Order agenda of the powers that be.

There is an important article on Alex Jones’ website entitled “United Nations To Destroy Property Rights of Thousands Around Alamo”:

There are 13 documentaries on the site that all have the phrase “UNESCO proclaimed [fill in the blank] a masterpiece of the Oral and Intangible Heritage of Humanity.” Sounds wonderful, doesn’t it? A sample of the titles is “The Baaka Opera,” “The Celestial Dance of Bhutan,” and “Kabuki, the Path of the Flowers.”

I have watched some of them and they are absolutely stunning and very impressive.

That’s what worries me.

They are “A Production ZED with the support of UNESCO.”

I fear that UNESCO is not supporting these documentaries as a way of preserving the heritage of humanity, but to take over control of it.

a reply to: Mary Rose

That is the path of the UN, the goal, to encompass us all within a single government on Earth, a single human race that yet touts diversity as a reverse kind of magnetic attraction. From a distant perspective through alien eyes, it is all that matters and the only solution if there is every to be one. We should get used to it.

Yet, of most of the citizens of the world, probably no nation as a whole or individually will suffer more than we Americans that have been taught to think that "Freedom" was a word with meaning. Today, that word is a joke without visible substance, a old textbook term that few will understand its former meaning in twenty years.

We are the big losers in this race to equalize everything and everybody but we seem to be paying most of the expense. Only our remaining wealth is important today as it is transferred willing and unwilling around the world in about every conceivable form of wealth transference possible. As I said earlier, we should get used to it.

I can't help thinking that there is something that we should be doing about it.

I do not know anything about the Alamo area in question, but if you do think that it is good just how it is and does not need any mining, fracking, roads or other development going on then a world heritage status can help defend this.

I think it's good to have laws protecting sites but what worries me is having the decision-maker be so far away and detached from whatever site is being "protected," because protection can be alleged as a pretext.

Protection used as a pretext to what?

When a place gets world heritage protection all forms of development are banned. The area might get some rangers, maybe have a little light tourism on the edges but generally it just gets fenced off to let nature do its thing without human interference.

This excerpt sums up the central issue that is recurring with everything to do with the United Nations assuming the responsibility for similar decisions to be made all over the world:

The Alamo in particular is already being preserved as a symbol of Texan and American heritage, so there is absolutely no need to shackle this shrine of liberty to an international treaty with UNESCO, which the Reagan administration referred to as having “a hostility toward the basic institutions of a free society, especially a free market and a free press.”

We urge Texas Land Commissioner Jerry Patterson and the Texas General Land Office to protect the property rights of Texans as much as they protect the Alamo.

I think that the smaller the area of jurisdiction for anything, the better. Keep the control local, in the hands of the people who live there.

originally posted by: kwakakev
a reply to: Mary Rose

Protection used as a pretext to what?

Take control out of the hands of the people who live there and into the hands of an eventual One World Government.

With what kind of restrictions are getting discussed for the neighbors I am sure will create a lot of tension, argument and disagreement.

As for the Alamo getting a world heritage status, it just gives it an added layer of protection. What if some day in the future some sell out out politician wants to set up a casino on the property, or oil is found there or some other plan is put forward to change the area. With UN oversight also added into the mix it does restrict the corruption and bad planning that does go on.

Most applications that I know of world heritage are generally applied to ecologically significant areas, not historically significant. So maybe it is not appropriate for the Alamo, this is one area I am not sure about.

. . . “You will recall, dear colleagues, that I said, before Mr Ban Ki Moon, Secretary-General of the United Nations, that UNESCO’s role is to think global governance. That is why the Organization was founded. We come to the rescue of the system especially when the economic machine runs out of steam, as it clearly has today. It is thus a matter of urgency to set up a long-term working group on global governance. I hope that a State or group of States will seize on this worthy proposal, and that the Organization, as of this session, will give it the attention it warrants.” . . .

originally posted by: kwakakev
What if some day in the future some sell out out politician wants to set up a casino on the property, or oil is found there or some other plan is put forward to change the area.

I think if we just had the local corruption to deal with we'd be in better shape. Giving the U.N. power to govern us is simply relinquishing our own local government.

With UN oversight also added into the mix it does restrict the corruption and bad planning that does go on.


No I think it means an eventual One World Government with central planning out of the hands of local residents.

Hi folks, I’m Alan Watt. We’re Cutting Through the Matrix. And I’ve gone over many times, this big agenda. This agenda of a utopia for the elite themselves, of course, and the technocrats they’ll use to run the future, not too far from now, in fact, because they want a big, big cull. And they’ve talked about this openly. I’ll touch on some of the Big Boys who did talk about it openly, tonight, if I have time. And they were talking about this in the 1920s onwards, how they’d have to vastly reduce the populations, and in their inner circles. They always give stuff for their outer circles to print in public. But in the inner circles they go much, much further and deeper, talking about, and they get the professors in to talk about the different ages that have come and gone, from Stone Ages to Bronze Ages, and Iron Ages, and things like that, right down to the Industrial Era, which, as I say did away with so many craftsmen and artisans, and put them all out of work forever, basically. And then you go post industrial, and then, all that lot that worked at factories are out of work as well, because you’ve got new human capital they call it, in China.

So, they’re always wondering what to do with the rest of us, you see, who are technically, in their terms, obsolete, because they run on secular humanism, and what they call being very pragmatic about the purpose of humanity. Because, for them, you see, there’s always a purpose for humanity. And we don’t just exist for the sake of living. No, no. We have a purpose, you see. And the ones at the top believe that they were the ones who were chosen to lead the purpose. And they use Darwinism as a flag almost for their cause. And they run UNESCO and a whole bunch of organizations at the United Nations.

I've heard Alan Watt say that he's been a researcher into what's going on in the world since he was 7 years old. I think we should listen to him.

edit on 07/31/14 by Mary Rose because: For some reason the link is causing a 404 error from ATS but not when the URL is entered separately.

I have watched some of them and they are absolutely stunning and very impressive.

That’s what worries me.

They are “A Production ZED with the support of UNESCO.”

I fear that UNESCO is not supporting these documentaries as a way of preserving the heritage of humanity, but to take over control of it.


I'm wondering what it means, exactly, that ZED had the support of UNESCO. Did UNESCO hire ZED to produce the documentaries? In other words, does UNESCO actually pay for documentaries?

If they do, what is the purpose? Why would a governmental body be in the business of purchasing documentaries? To create a means of control over the subjects of the documentaries somehow? 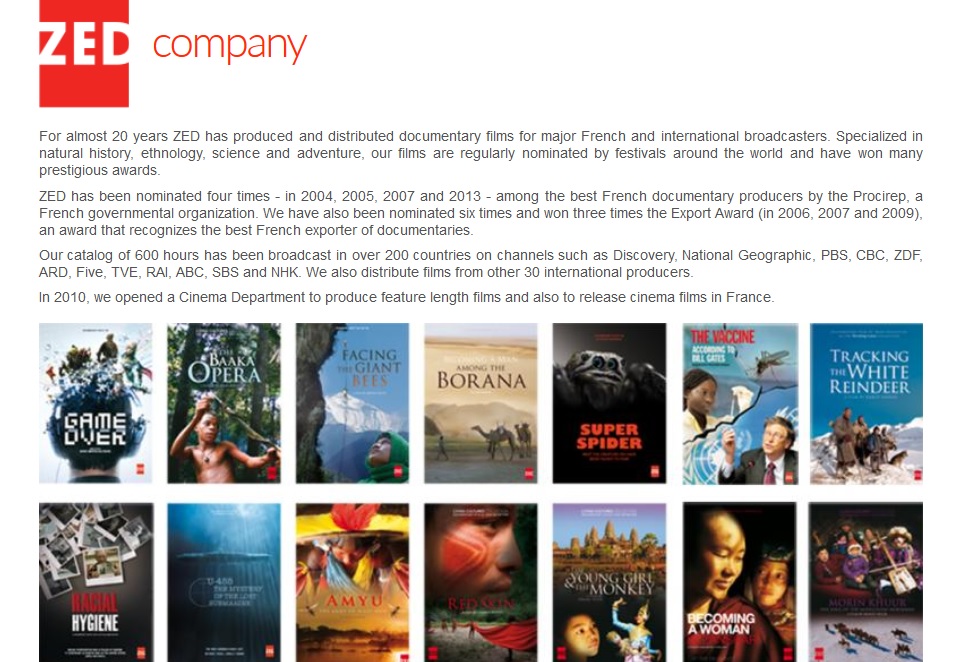 I'm reminded of the fact that the Rockfellers paid for the set up of the United Nations in New York.

When you pay for things, you own them.

originally posted by: Mary Rose
A sample of the titles is “The Baaka Opera . . .

If you were to watch that documentary, you would know why the powers that be would want to take control over the people the documentary is about - the central African Pygmies.

What spirit they have! 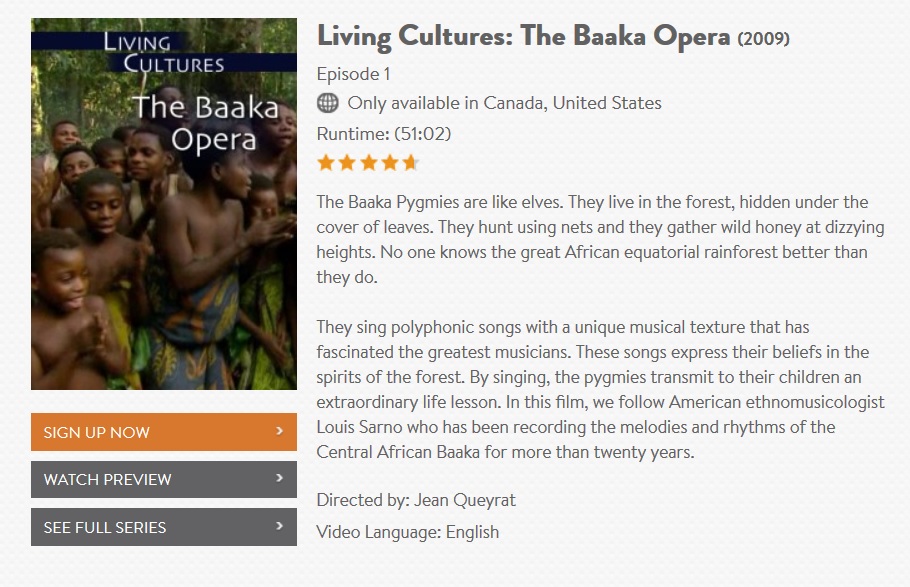 If you were to watch that documentary, you would know why the powers that be would want to take control over the people the documentary is about - the central African Pygmies.

What spirit they have!

The Baaka Pygmies are like elves. They live in the forest, hidden under the cover of leaves. They hunt using nets and they gather wild honey at dizzying heights. No one knows the great African equatorial rainforest better than they do. They sing polyphonic songs with a unique musical texture that has fascinated the greatest musicians. These songs express their beliefs in the spirits of the forest. By singing, the pygmies transmit to their children an extraordinary life lesson. In this film, we follow American ethnomusicologist Louis Sarno who has been recording the melodies and rhythms of the Central African Baaka for more than twenty years.