posted on Jul, 30 2014 @ 02:26 AM
link
Another day, another incident involving the deaths of innocent civilians.

Israel has shelled a UN school, 5 days after it was alleged that they had killed 15 in a separate incident involving a school in Beit Hanoun.

As Israel unleashed its heaviest bombardment yet in the three-week war against Hamas, shells slammed into the UN school being used by people displaced by the fighting, killing at least 15 and wounding 90, said the officials.

Hundreds of Palestinians had sought shelter in the school from intense fighting and Israeli tank fire, said Adnan Abu Hasna, a spokesman for the UN aid agency UNRWA.

A UN official said the shelling hit a bathroom and two classrooms, but gave a lower initial death toll of 13 to 15.

Numerous shells were fired at this specific school, meaning that it was deliberately targeted by the IDF. I don't know if the school was in possession of rockets, but i still honestly think that Israel should reconsider shelling locales housing numerous civilians.

Hamas should stop bring cowards and hiding in amongst civilians. Think about it. It's like someone standing in a crowd of people and running out, firing a couple rounds and you, jumping back in expecting you not to shoot.

A United Nations group providing humanitarian relief in the Gaza Strip said they found rockets hidden by militants inside a vacant school Tuesday, adding to complaints that Hamas is hiding and launching weapons in the vicinity of civilian structures.

The IDF released aerial photos Sunday of rocket launch sites inside Shijaiyeh. The pictures claimed Hamas launched rockets from inside and around a mosque, a hospital, a children’s playground and a cemetery.

Again? I thought these guys had the most modern tech in the world and could hit their targets with pinpoint accuracy.. Unless they are aiming for these civilian hotspots of course.

They are both cowards. Zionism has a track record of bombing civilian targets on purpose, why would it be any different today?

posted on Jul, 30 2014 @ 07:04 AM
link
a reply to: boncho
what? I'm not saying everything that hamas has done is a good thing that's for sure, but in one of the most densely populated places on earth with nowhere for civilians to run and under heavy bombardment from a known pack of genocidal maniacs you want their only fighters who have next to nothing to cause much damage with compared to their opponents, to stand out in the open so the Zionist cowards can drop a few bombs leaving not a single soul to fight against this so called chosen race? give it a rest

You've got to be almost as mad as the Zionists themselves, or maybe even one of them.

Would be funny to see how you reacted if you were born in Palestine and grew up having lost your family/parents/brothers/sisters/children, and watching your neighbours get blown up, and having nowhere to run on a small piece of land, I'm convinced you wouldn't be the hypocrite you are now. Oh but, this, but that, but, but. Don't fool yourself, because you're certainly not fooling anyone else here who hadn't lost the plot long ago

posted on Jul, 30 2014 @ 07:20 AM
link
a reply to: boncho
We know why israeli soldiers prefer to bomb these "missile sites" from orbit, to just go in and inspect with all of those women and children would be scary.
The israelis are simply afraid of women and children as evidenced by... 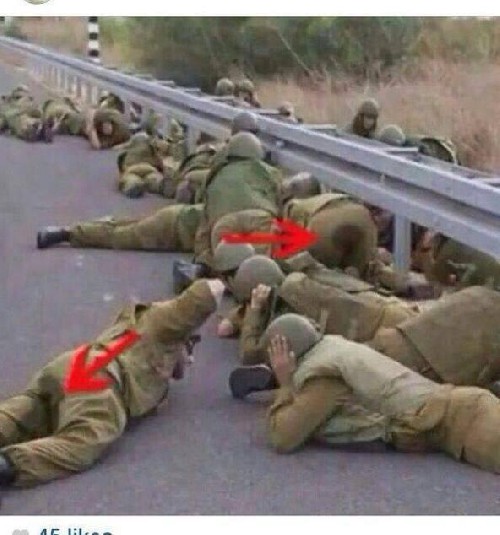 This is the reality of an israeli oppressor, they can't handle a fair fight.
The logistics for just their underwear cleaning alone must be astronomical!
Pics, because it did happen!

The wet spots were photoshopped in, sorry.

Would be funny to see how you reacted if you were born in Palestine and grew up having lost your family/parents/brothers/sisters/children, and watching your neighbours get blown up, and having nowhere to run on a small piece of land, I'm convinced you wouldn't be the hypocrite you are now. Oh but, this, but that, but, but. Don't fool yourself, because you're certainly not fooling anyone else here who hadn't lost the plot long ago

The same goes, I guess you are saying you would invite Hamas to hide their rockets in your church and school if you lived there?

I would have to agree with boncho they are shopped in the pic. They have to be because the IDF like the boy scouts come prepared. 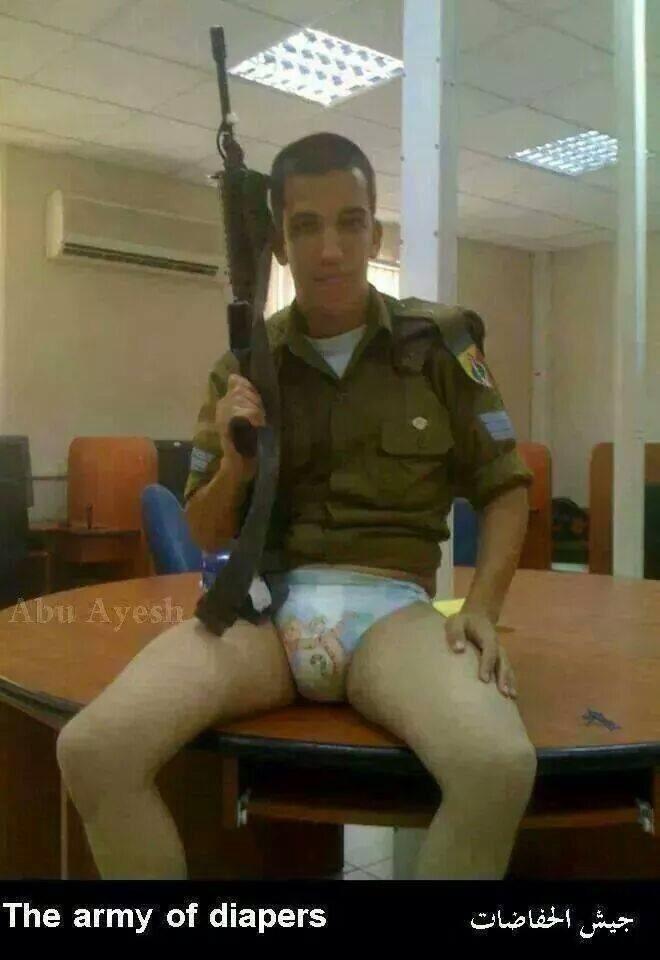