Is this a new low? Female Israeli MP says "Mothers of all Palestinians must be killed"

posted on Jul, 19 2014 @ 04:09 AM
link
A friend sent me this link regarding a statement made by an Israeli MP. Ayelet Shaked, an Israeli politician has said that the Mothers of all Palestinians must be killed. 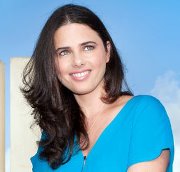 Israeli MP: Mothers of All Palestinians Must Be Killed by Press TV / July 17th, 2014

A well-known Israeli politician and parliament member has branded Palestinians as terrorists, saying mothers of all Palestinians should also be killed during the ongoing Israeli assault on the besieged Gaza Strip. Ayelet Shaked of the ultra-nationalist Jewish Home party called for the slaughter of Palestinian mothers who give birth to “little snakes.”

She said "They are all our enemies and their blood should be on our hands. This also applies to the mothers." followed by "They have to die and their houses should be demolished so that they cannot bear any more terrorists."

For the record, I am Jewish, and I think statements like this do nothing except to add fuel to the fire. I am no supporter of Hamas whatsoever, and while I support the rights of the Palestinians to a homeland, in no way do I feel the Jewish people of Israel are to blame for the actions of their government.

The fact of the matter is that there are extremists on both sides, and possibly a whole of bunch of what would otherwise be normal people, sandwiched in between the crappy politics, policies, and rhetoric of their political leaders.

I hope this thread doesn't turn into a historical argument over who has the right to the land - I think that serves no purpose.

If Israelis and Palestinians felt comfortable speaking out against the disgusting statements made by their so-called leaders, perhaps peace would stand a better chance.

I don't mind the words, as probably a lot of people think like that on both sides. Words, said in anger and grief, more than hatred.

However, the person in question should definately not be a politician or in any power position, with a pre-disposition like this.

posted on Jul, 19 2014 @ 04:19 AM
link
Oh Boy.. now we are pointing on pages which has no proof of that really happened, no print screen of supposed lines from the facebook. Bloggers are they reliable sources ?

originally posted by: dollukka
Oh Boy.. now we are pointing on pages which has no proof of that really happened, no print screen of supposed lines from the facebook. Bloggers are they reliable sources ?

Well I don't know. There's a reference here from the Jerusalem Post, an Israeli newspaper

Erdogan states Turkey-Israel ties will not be normalized as long as Israel continues to "kill innocent children and continue its operations in Gaza."


It certainly doesn't say exactly what the other article says, but Turkey and Israel have reasonable good relations, so for the Turkish leader to say this certainly says something.

Ok, digging a little deeper, here is a response from Skaelet herself.

In a story headlined “Israeli Politician Declares War on the Palestinian People,” Resnick actually suggested I compared Palestinian children to “little snakes,” and accused me of fomenting Palestinian genocide. This vilification was later picked up by several bloggers and reporters, all of whom were convinced of this frightening notion, without even a scrap of fact or truth.

I think you hit the problem squarely on the head for one side, e.g. the Palestinians being scared of Hamas but I also think that this is true also for many of the Jewish population with their extremists also.

Extremists will apply pressure for their cause especially on their own people and there will also be the staying with your people attitude apart from, their pressure also. I do believe the Israeli government has manipulated its people by keeping up a quiet propaganda war against them and feeding them the facts it wants about how dangerous the Palestinians are to Israel's existence, regardless of the fact that the Palestinians need Israel to exist so they can live there also.

One way of dealing with Hamas is to integrate both peoples so Hamas can't keep strongholds in Palestinian areas and viva-versa, apart from governmental buildings. There are more eyes to see what is really going on. This situation is being maintained by probably a smallish group on both sides and the majority in Israel are all beholden to them.

No matter what pictures of whom we actually see, this is going on on one of the world's most sacred sites and it is a depiction of human failure of the very worst kind.

... google the swine then get back to me and tell me she deserves to be treated humanely


According to human rights , everyone should be treated humanely. How else should she be treated ? Why you call her a swine.. anyway ?

An Israeli encouraging the emulation of atrocities that were perpetrated by the Nazi regime upon to her culture during WWII is hypocrisy.

This woman is devoid of empathy.

I agree with the OP.

originally posted by: cuckooold
If Israelis and Palestinians felt comfortable speaking out against the disgusting statements made by their so-called leaders, perhaps peace would stand a better chance.


Who elects them?
Obviously there is a silent majority that agrees with them or they wouldn't keep ending up in office.

a new low? no not for Israeli's/Zionists, it's just standard for them

She'd look really pretty with a few bullets between the eyes

That is the new low in ATS.. people have gone nuts here !

originally posted by: dollukka
Oh Boy.. now we are pointing on pages which has no proof of that really happened, no print screen of supposed lines from the facebook. Bloggers are they reliable sources ?

Just find a few Zionist quotes from the past and you will see that woman's comments are likely true. That;s the thing, this is nothing new.. It is etched in their thick heads.

I take it you haven't googled her yet, there's many other words I could call her but I'm pretty sure the posts would be removed.

According to' human rights' she wants to commit mass genocide, and wants to kill women and children, and you think she deserves human rights after that?


originally posted by: dollukka
Oh Boy.. now we are pointing on pages which has no proof of that really happened, no print screen of supposed lines from the facebook. Bloggers are they reliable sources ?

Just find a few Zionist quotes from the past and you will see that woman's comments are likely true. That;s the thing, this is nothing new.. It is etched in their thick heads.

Perhaps you are right, perhaps not.

For the record, Shakelet herself has offered her own statement regarding this hoo-ha, and it may be worth reading through it to make up your own mind.

An Israeli encouraging the emulation of atrocities that were perpetrated by the Nazi regime upon to her culture during WWII is hypocrisy.

This woman is devoid of empathy.

These words are said in anger, and grief, that is born out of empathy.

Mothers are ultimately responsible for the education, and the upbringing of their children. So if a child is brought up in such hatred, that it believes in the inhialation of the israeli state, it is the mothers who have fed them with this. And their untimely death on a battlefield, is because their mothers (and fathers) threw them on the battlefield, and thus ultimately responsible for their deaths.

Yeah and the next day they're milking the holocaust again.


What are human rights?
Human rights are rights inherent to all human beings, whatever our nationality, place of residence, sex, national or ethnic origin, colour, religion, language, or any other status. We are all equally entitled to our human rights without discrimination. These rights are all interrelated, interdependent and indivisible.


So are these rights just a placebo, it seems that people are very willing to decide themselves who has a rights and who don´t.

Well if you kill the mothers there won't be any more children. Seems this jew is suggesting genocide, a holocaust agaisnt the Palestinians.

You don't even see the bitter and ugly irony, you even make excuses.

I find that just as disgusting.

You don't even see the bitter and ugly irony, you even make excuses.

I find that just as disgusting.


Her words are uncarefully selected, but I wouldn't interpret it as promoting genocide.

However, Hamas, and other groups in the middle-east are and have been since 1947, promoting the genocide of jews. I feel no sympathy for people, who raise their children in such hatred.

But, it is those who takes take those thoughts to the next step and send their children into death with a bomb around their neck, that are truly and ultimately despicable. Throwing their children out on the street, to throw rocks at tanks, and putting their own children in harms way ... is truly a dispicable act.

I'm not a political, my opinions don't matter ... but it's still my opinion, that people who send their children out like that ... shouldn't have children. You should protect your child, from the harms of the world ... not urge it to be a part of it.