Russian scientists got their first look inside the mysterious crater in Yamal, Siberia on Wednesday, July 16, while the Siberian Times took a helicopter ride to get another look down into the hole.
Read more at www.iflscience.com...

Wow! I wonder if it freeze-thawed its way down? Unfreezes during daytime, freezes at night. Every time the water unfroze, the water would seep into cracks. When it froze it would expand and crack open more layers of earth?

I really don't know what to make of this in general. So far the given list of possible explanations doesn't satisfy me. Thanks for posting this... I liked being able to see inside the mystery crater.

Alright this is too weird now. The sides look like something perfectly symmetrical blasted upward. Does anyone else think this is really weird? I don't know much about permafrost but what kind of reaction or action caused by that would result in such a perfect hole that is so "clean" looking in terms of how it is shaped + the ejected material? Hoping to learn more because I just don't have anything rational popping in my head on what could have caused this.

Agreed the list of explanations has me really wondering... something just isn't adding up.

I'm not necessarily going to the alien or unexplainable route. I think there is a logical explanation for the crater, but none that have been put forth so far seem very likely. Hopefully we'll know more soon....

posted on Jul, 18 2014 @ 04:49 PM
link
Okay. I'm no longer of the opinion that a methane explosion is the source. I'm going with giant prehistoric worm-like creature or an abandoned sarlac pit.

In all seriousness between the water, the smooth sides and the patterns of erosion make it look like some sort of cave carved out by melting permafrost... except for the ejecta.
edit on 2014-7-18 by theantediluvian because: (no reason given)

posted on Jul, 18 2014 @ 04:51 PM
link
It does appear to have scrape marks going upward! Amazing footage. I hope they rope up and repel down at some point. Did anyone else notice splash/ wave action against the side? To me that indicates water surge from some place beneath the water line.

Actually, it just dawned on me that we might have found the largest ant hill ever.

Be on the lookout for a new Stephen King book.
edit on 7/18/2014 by TarzanBeta because: (no reason given)

originally posted by: robbystarbuck
a reply to: Osiris1953

Agreed the list of explanations has me really wondering... something just isn't adding up.

Look at the smoothness of the sides and the vertical striations as well as the fairly uniform ejecta around the edges, no flow downhill towards that little lake and no scorching. Something pushed its way up and out and it either left or dissipated. Whether that is a mechanical object or a large gas bubble, hmmmm? Gas bubbles don't make striations or smooth walls. A liquid would have flowed to the lowest point but there is no evidence of flow. Explosions leave scorching/fires but there is no damage to the surrounding exterior or interior of the hole.

To me it looks like something mechanical was buried, activated, moved vertical slowly, accelerated and then left. Because of the spherical shape, could have been a ship of some kind. Already discussed this in the first thread.

When all the possible and non-probable solutions are proven wrong, only the impossible remains which might actually be the answer ;-)

posted on Jul, 18 2014 @ 05:01 PM
link
well that's most mysterious and super-interesting. the sides look so smooth, like a giant cookie-cutter was pushed through. i eagerly await further developments.

Could it be an ancient porthole leading inner earth ? Maybe the hole was already there but covered up and then uncovered by a methane gas explosion ?

Just a thought experiment added to a little wild imagination.

That's EXACTLY what it looks like. I really don't want to jump to the looniest sounding thing but honestly it fits best that something mechanical caused this when you look at the sides, shape, etc. Something from down there came UP. That's how it appears anyhow but likely even if that's the case we'll never hear what really happened. So many possibilities.

Yes none of the others that were odd in their smoothness has the debris around the edges. It is very impact like.

The one under the woman's bed is totally weird too though as the tiles look cut.
www.myfoxphoenix.com... 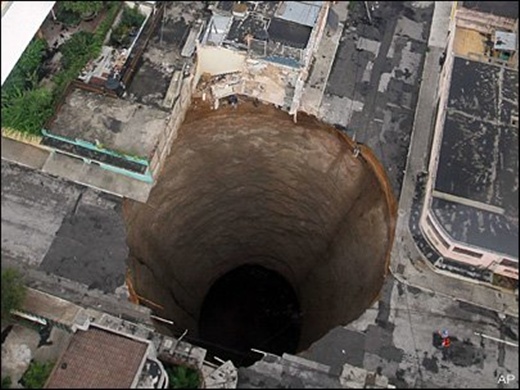 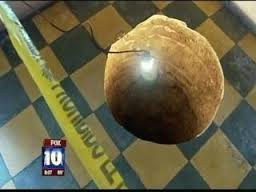 What's crazy is the weird answers sound more logical with this thing... Which is rarely the case!

I'm pretty sure that is the area we buried Megatron... Looks like he found his way out of the whole and is set to destroy our planet...

But seriously, I get there is likely some natural explanation for this, but I can't help but imagine a bunch of "what ifs" here....

originally posted by: nighthawk1954
a reply to: bobs_uruncle Yes the smoothness of the sides and the material blown out... X-Files.

Looks like something dark in the water wish there was better pictures, wonder if they will go in!