Kingsolver, 49, is one of at least 35 Disney employees arrested since 2006 and accused of sex crimes involving children, trying to meet a minor for sex, or for possession of child pornography, according to a six-month CNN investigation that examined police and court records, and interviewed law enforcement officials and some of the men who have been arrested.

Five Universal Studios employees and two employees from SeaWorld have also been arrested.

So far, a total of 32 have been convicted, with the remaining cases pending.

"Brice Taylor" is a name that surfaces around conspiracy forums from time to time. Brice is a woman with a lifetime of crazy stories. She claims to be a victim of MK Ultra mind control and some of her allegations include:


Needless to say, some of these allegations are far-fetched at best. In her book, Thanks for the Memories, she talks about being taken to Disneyland as a young child and how the "Disney Parks, MGM Studios, Disney Movies, Disney characters, and
Disney songs have been used in conjunction with the programming."


Later on, in the dark of the night a man in a suit took me on the Matterhorn and stopped the
rollercoaster ride at the waterfall where he told me everything that happened was washed away and gone
forever. He made me get off the ride and stand on the rocks high up inside the Matterhorn all alone in
the dark that night. I was really tired. He said they were leaving me there alone because I didn't do it
right and I didn't listen well. I was terrified in the dark, wet, rocky area that was whooshing with the
sound of the wind and cars from the ride speeding by. But it got even scarier when the area fell silent.
Cold and tired, I was left totally alone for what seemed to my child self like forever. When the man finally
came to get me, he asked if I was ready to be good. Then he said a lot of words while he carried me to my
parents. Handing me, all limp and wet, over to my mother, he said, "She's asleep." My mother was
crying, my father was smiling and the man in the suit said, "It's been done, she's now ready for the next
level."


From Thanks for the Memories

As crazy as Brice's story seems, there was always a small part of me that wanted to believe her. Perhaps the corroborating evidence that supports her story is finally coming to light.

If you look up Brice's book, Thanks for the Memories, it's easy to take her for a rip-off. The current price on Amazon is nearly 60 bucks. I have personally bounced back and forth with her story quite a bit.

A few years ago, I came across a name at my job. It's no secret that "Brice Taylor" is a pseudonym, and Brice does share her real name in her book. I won't mention it here, but you wouldn't have to look far to find it. Anyway, I came across that name and did a little light research like Googling an address, etc. Come to find out, Brice resides in my state in a small town and she works as a Neurofeedback tech.

There's no doubt that it's her as there is a picture of her on the website. For me, this is one of those stories that is so crazy, you file it in the back of your mind only to remember it when news comes down the wire that reminds you of it.

What do y'all think about Ms. Taylor?

posted on Jul, 15 2014 @ 05:48 AM
link
Hey i just watched a 15 year old kid give a press conference after her entire family was executed, smiling and waving giving the devil horn sign,showing no signs of grief and that is supposed to be real.
So what ever Ms Taylor has to say I'm taking it on board with an open mind.

posted on Jul, 15 2014 @ 06:31 AM
link
There are others making similar claims about trauma based mind control. The history of it adds up with projects like Paperclip and MK Ultra. In trying to understand just what happened with 9/11, the mind control aspect provided a piece that fits very well. Not just with the mass media public programming but also the more direct influence of key individuals as it has all played out.

The basic theory of mind control presented seams sound, I have not tried it. The Stockholm Syndrome is one effects that supports the basic premise, projects like Monarch do take it a lot further thought as the personality is split and alters created. Considering what some people will do for war, power, knowledge and profit, the undertaking of unethical experiments is not new.

As with any autobiography it may not be 100% accurate due to many factors, personally I do find it too important to ignore if you do want to understand just what is going on. We are all influenced by our environment, some more than others.

Did she did this? 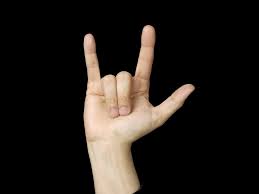 Because that is "love" in sign language, doing gestures can be dangerous in some places as waving hands or crossing fingers are insults in some places

originally posted by: PLAYERONE01
So what ever Ms Taylor has to say I'm taking it on board with an open mind.

I understand completely. That's kind of where we are now. Nothing is unbelievable anymore. This is just the tip of the iceberg.

originally posted by: kwakakev
Considering what some people will do for war, power, knowledge and profit, the undertaking of unethical experiments is not new.

As with any autobiography it may not be 100% accurate due to many factors, personally I do find it too important to ignore if you do want to understand just what is going on. We are all influenced by our environment, some more than others.

Not to mention, we know some of these things are real due to declassified documents and public apologies made by politicians from time to time.

I don't often like to use Wikipedia as a source, but sometimes it does sum things up well with a lot of information. I use it a lot in research, but usually head straight to the linked sources.

posted on Jul, 15 2014 @ 07:29 AM
link
Everybody laughed at David Ike when he was saying Jimmy Saville was a pedophile/necrophiliac, that there was also a cover up within the BBC & with high politicians involved back in the early 90's, or even before. But he turned out to be right on the money did David, so who's to say this Lady isn't telling the truth?

I'v always been well aware of the symbolism Disney uses & wouldn't be surprised if it was a conditioning tool. Interesting, thanks for sharing.
edit on 15-7-2014 by n00bUK because: (no reason given)

I've recently read that the Satanic Bible does in fact say that you can do the hand-horns with OR without the thumb. I believe it was referred to as "concealed or revealed". Yes its ASL but I mean the "peace" sign means otherwise in the UK---why can't something in American Sign Language also be another group's signal? Totally not trying to contradict you, I've seen people FREAK OUT at seeing the genuine ILY sign. Like most symbols now, it is all about intent.