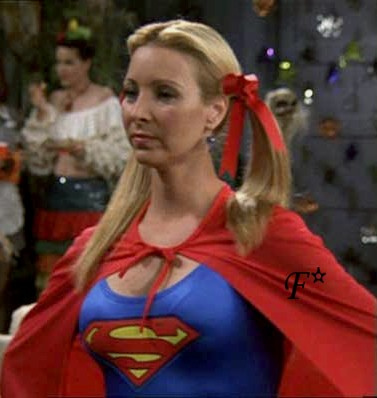 Discovered by William Henry Pickering on 17 March 1899 from photographic plates (and being the first satellite to be discovered photographically), it is an irregular satellite of Saturn a little over 200 km in diameter. 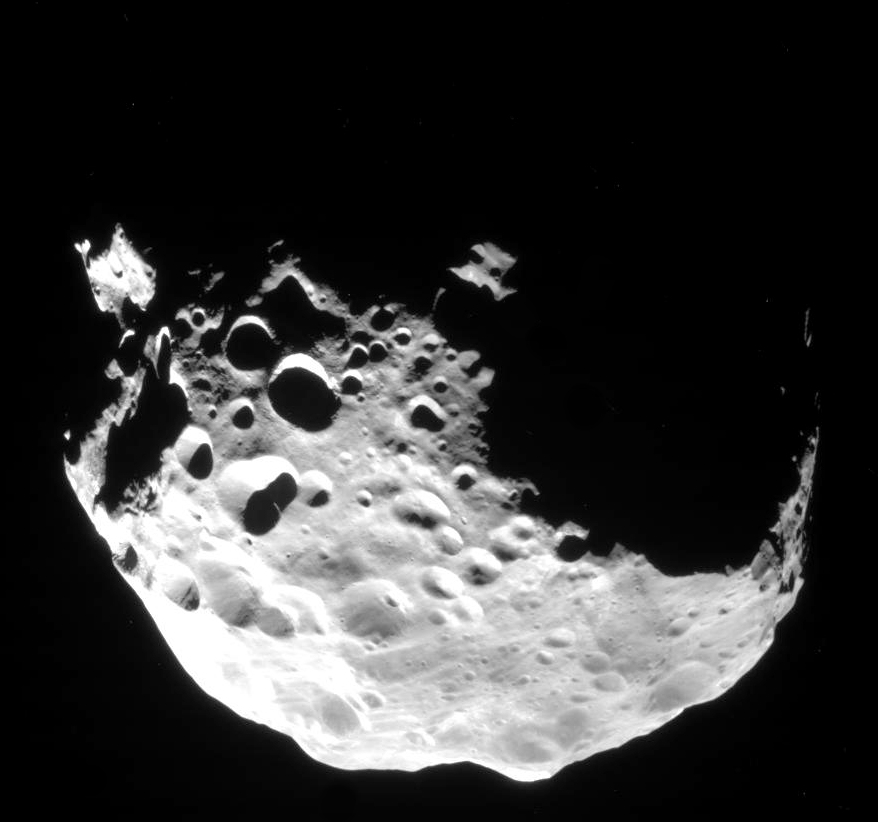 Phoebe is truly an odd one among her "friends":

For several reasons, Phoebe is thought to be a captured object that does not share a joint origin with Saturn and the inner, "regular" satellites. It orbits in a retrograde direction, opposite to the direction of Saturn's other major moons. Its overall density was determined by Cassini scientists to be quite large for a moon of Saturn. The prevailing view is that Phoebe might have formed in the Kuiper Belt, far beyond the orbit of Saturn. It might thus be a small cousin of the largest Kuiper Belt object, Pluto.

Most of Saturn's inner moons have very bright surfaces, but Phoebe's albedo is very low (0.06), slightly brighter than fresh asphalt or charcoal. However, it is believed that underneath that dark surface, there is water ice.

NASA's spacecraft Cassini took some closeups of Phoebe on its way to the orbit around Saturn. These are the closest and most detailed images we have of this moon. Since then, Cassini has been orbiting close to Saturn and never close enough to Phoebe to take such pictures again.

Here's a mosaic I made from Cassini's raw images during that fly-by: 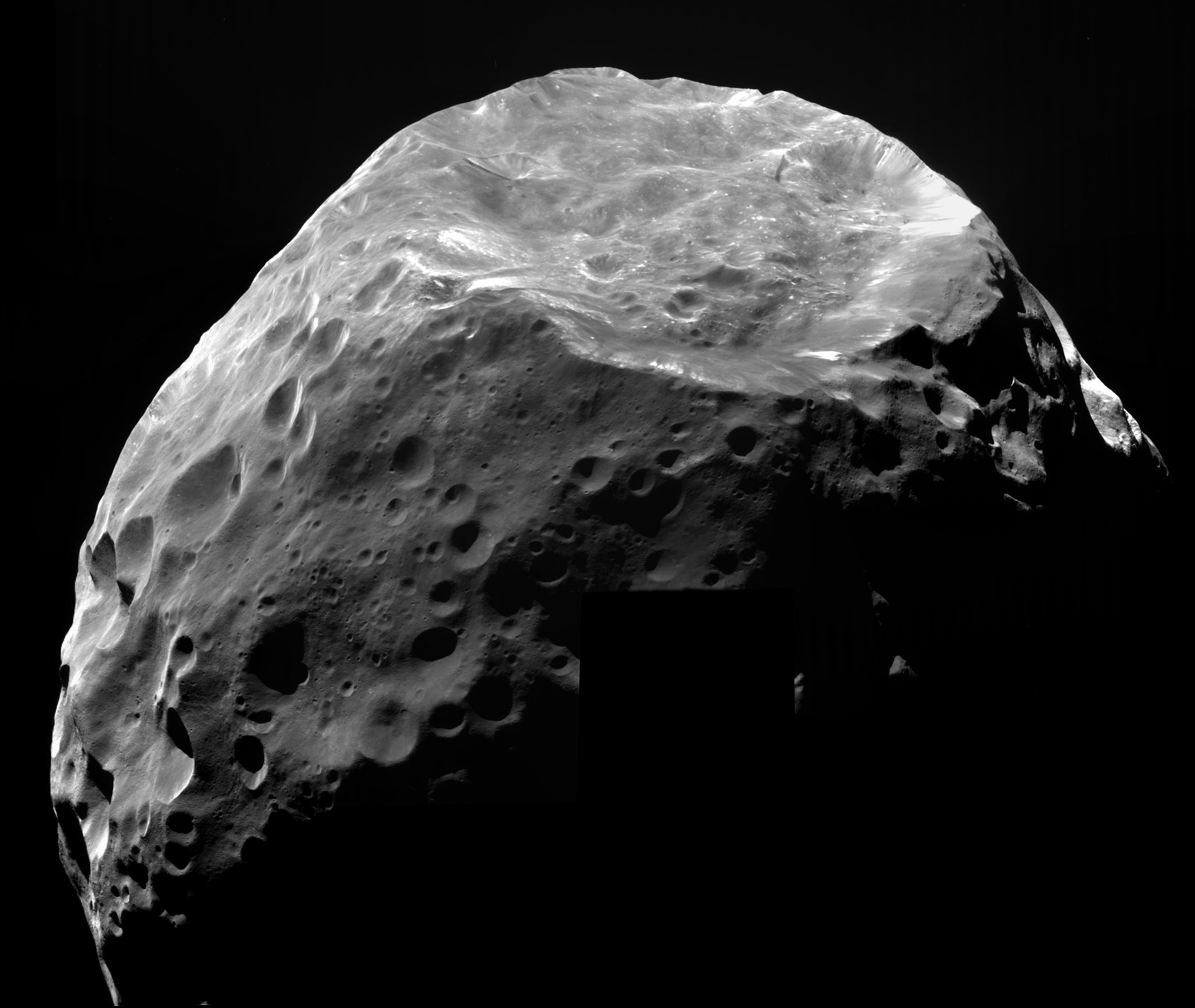 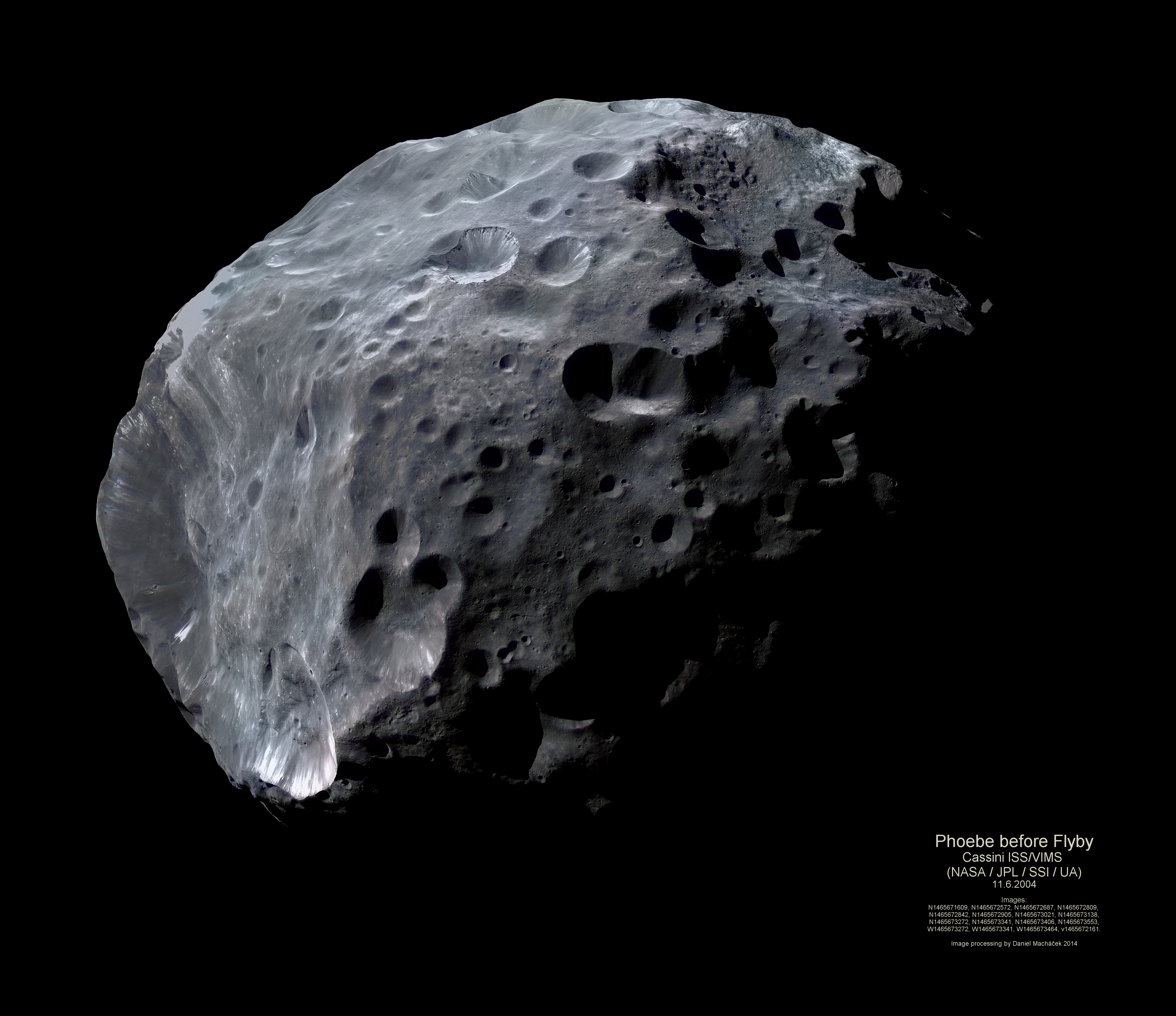 posted on Jun, 16 2014 @ 11:13 AM
link
a reply to: wildespace
This thing is just like Mars in my view full of anomalies.
Maybe I will post some of it later gotta go now.
2e Picture on the right side the illuminated part.
Take the Pictureshack link and download.

Thx for posting .., i love to take these pics apart.

posted on Jun, 16 2014 @ 05:37 PM
link
I'll bet that the big missing chunk fom Phoebe is probably from when it suffered a collision with another body in the Kuiper belt, hence hurling it towards Saturn.
Love imagining these things!

posted on Jun, 16 2014 @ 05:44 PM
link
I love checking the recents so that I stay up to date with everything on ats. I must say this was the most excited ';ve been for a recent post in a bit. I love that you do these and break them up instead of creating one huge mega thread. Always interesting and very informative.a reply to: wildespace

posted on Jun, 16 2014 @ 05:52 PM
link
Thanks for the photos and history OPSure is an odd duck but MAY have life sustaining water on it.Interesting.

posted on Jun, 16 2014 @ 07:22 PM
link
a reply to: wildespace
S&f...I am always interesting in new information to increase our knowledge to our celestial neighbors.
Can't contribute much to your post; but nonetheless very interesting...

posted on Jun, 17 2014 @ 02:24 AM
link
Thanks for your feedback, I love making threads like this. There are many other "Strange Moons" threads on ATS, just do a search for them.

posted on Jul, 1 2014 @ 04:28 PM
link
I made a video using my Cassini images of Saturn and some of its moons (some of which featured in the "Strange Moons" series of threads.

Please watch full-screen and in HD.