Physics We Can All Understand - Part 4: The Standard Model

posted on Jun, 12 2014 @ 04:21 AM
link
Hi, I'm John Skieswanne, and this post is part 4 of a series on physics. In this series I will explain a few pillars of modern physics. I won't be using any complex maths. It is my hope that this series will introduce some of you brilliant, curious-minded laymen out there to the inner circles of Physics.
So, sit back and enjoy.


The Standard Model of Particle Physics.

What is the irreducible components of the Universe? If it's made of gases and atoms and stars and rocks, are all of these made of something smaller? The answer, of course, is yes. It turns out that everything is indeed made of incredibly small components called "elementary particles". They are the Universe's DNA. Even your DNA's DNA, for that matters. These components build up atoms, electrical currents, even forces such as light and inertia. And now you're going to meet all 17 of them.

The first particle ever discovered was the electron in 1897, by Joseph John Thompson's team. The later even published a good approximation of the electron's mass and electric charge. This elementary particle is responsible for electrical currents. Electrons are also found surrounding the atom's nucleus. Alternatively, a heavy version of the electron, called the muon, was spotted by Carl David Anderson in 1936. The atomic nucleus itself was discovered to contain neutrons and protons - and, later, protons were proposed to be composed of three quarks (two up quarks and one down quark) while neutrons were proposed to be composed of three quarks (one up and two downs). Later on, strange particles were discovered (for instance kaons) which were a combinaison of a strange quark with either an up quark or a down quark. In 1974 the J meson was discovered, which were composed of charm quarks. An even heavier electron (the tauon), along with top quarks and bottomquarks, were discovered in the 70s (and in the 90s for the top quark). A neutrino for the electron, the muon and the tauon were observed to exist - they act a bit like their respective particle's luggages. When a particle decays and emits an electron, it was observed that some energy was missing, so it was proposed that a neutrino was carrying it away. Gluons were proposed to "glue" quarks together. Photons are particles of light. To explain particle decay (only a few particles can survive for longer than a fraction of a second), the W boson and the Z boson were introduced. And, most recently, the Higgs boson was introduced to account for the inertia of the particles. The latter acts a bit like a molasses which cling on a particle and give it mass. All forces in the Standard Model are explained with mathematical equations, called Special unitary groups (SU). 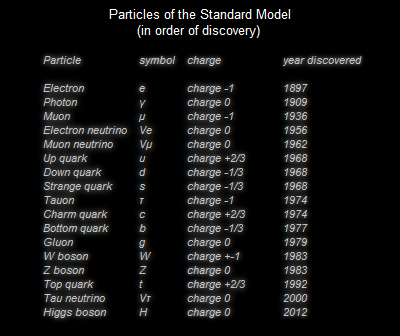 All particles (well, except the Higgs boson) have spin. The spin is the rotation of a particle on itself (as particles travel, they spin on themselves, like a bullet does after it's been fired from a rifle) - half a spin means that the particle looks the same after 1/2 rotation. A spin of 1 means the particle basically looks the same all over. Elementary particles with an integer spin are called "bosons", and usually they carry forces. Particles with half a spin are called "fermions", and they compose matter. There are 12 fermions in the Standard Model. The rest are bosons.
Particles were also observed to have mass, although we don't know for sure what's the mass of any neutrinos (only that it's below a certain value). Usually the mass of most particles is measured in a special unit called Mega electronVolt (MeV). 1 MeV is equal to 1.782 octillionth of a gram, or 0.000,000,000,000,000,000,000,000,001,782 gram.
Fermions which are the most normal and were discovered first, in other words, the electron, its neutrino, the up quark and the down quark, are said to be "first-generation particles".
Fermions which were discovered a bit later, were more massive and thus were more prone to decay very fast, such as the muon (heavy version of the electron), its neutrino, the charm quark (heavy version of the up quark) and the strange quark (heavy version of the down quark), are very rare on Earth and they are said to be "second generation particles".
Finally, super-heavy particles which were discovered last, whose mass are such that they are impossible to find unless you own a CERN-class particle accelerator, and which decay even more quickly than Generation 2 particles, include the tauon (super-heavy version of the electron), its neutrino, the top quark (super-heavy version of the up quark) and the bottom quark (super-heavy version of the down quark). These are said to be "third generation particles".


Nearly all particles were observed to have a mate, particles whose properties are exactly the inverse of the original particles - antiparticles. Antimatter is a mirror of matter - an antielectron will have an electric charge of +1 instead of -1, an antiup quark will have a charge of -2/3 instead of +2/3. When an antiparticle meets its mate, they annihilate each other and give off two photons which carry their energy away. If you count antiparticles, the Standard Model has 30 particles. Only 4 particles (all in the boson family) don't have antiparticles and that's the photon, the Z boson, the gluon and Higgs boson.

Building on the Standard Model's data, many theories has been proposed to unify this zoo of particles. String theory notices that the SM assume particles to be point-like (infinitively small), and proposes that, instead, particles are infinitively narrow strings. Others have suggested that particles were themselves composed of smaller (usually three) particles called preons.
Alot of observations, nowadays, show us that the Standard Model is getting a bit old - for instance it does not account for dark energy, dark matter, neutrino oscillation, general relativity, etc. 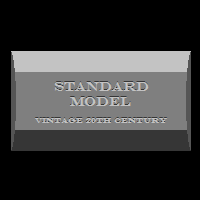 But, it is nevertheless the only model which has successfully united all particles under only one roof. And, in that respect, I think it should be fair for it to receive, at the very least, the title of ToNE - a Theory of Nearly Everything.


I hope you enjoyed this read; Part 5 will be coming soon, and will deal about another popular aspect of modern physics.


Other parts of the series:

posted on Jun, 12 2014 @ 04:59 AM
link
Far from being a theory of nearly everything, the Standard Model is not even a theory. It is merely the minimal, empirical model indicated by current experimental facts in particle physics.
Please stop using the silly phrase "theory of everything" and its variations. Only the most vapid materialist (common, of course, amongst physicists) regards matter as constituting "everything." If you are looking for a true "theory of eveything" that can deduce superstring theory from a general scheme that describes ALL levels of reality (not just the space-time continuum) and which proves with mathematical rigour that the scheme is embodied in the sacred geometries of certain religions, study the large volume of research here. Its primary implication is that the Standard Model is only partially correct and not fundamental because the research proves that quarks are bound states of three basic particles that are yet to be detected.

posted on Jun, 12 2014 @ 05:07 AM
link
What about the electric universe theory?does that come into this discussion too?

No, the Standard Model has no traces of the EU theory. The latter is still considered pseudoscience.

And to be fair I am not overly fond of the Electric Universe Theory. Stars don't function on nuclear fusion but on sucking electricity? Doesn't make any sense.

originally posted by: micpsi
If you are looking for a true "theory of eveything" that can deduce superstring theory from a general scheme that describes ALL levels of reality (not just the space-time continuum) and which proves with mathematical rigour that the scheme is embodied in the sacred geometries of certain religions, study the large volume of research here.


Or here: An Octahedron at the heart of all matter and energy.

The point is, the SM does not pretend to know everything... it serves as basis for new, more complete models. And it is a theory - albeit successful, the quark theory is a theory (fortunately proven right by deep inelastic scattering).

Thanks for such a complete guide of the Standard Model! I am surprise nobody had flagged you yet...

So, except the basic infos about basic particles such as electron, photon, neutron, etc, what does the more exotic particles do? For example, what the muon contribute to our universe?

originally posted by: starheart
For example, what the muon contribute to our universe?


One of the unresolved questions in Physics is exactly that. Why are there three generations of particles? No physicist has been able to answer that one until now.

The muon really acts like a heavy electron. It can even replace electrons in atoms, making these atoms "muonic". But other than that, we just don't know what God created the muon for exactly.

The muon really acts like a heavy electron. It can even replace electrons in atoms, making these atoms "muonic". But other than that, we just don't know what God created the muon for exactly.

Sure, but my personal theory is irrelevant.