Physics We Can All Understand - Part 2: the Special Theory of Relativity

posted on Jun, 4 2014 @ 09:51 AM
link
Hi, I'm John Skieswanne, and this post is part 2 of a series on physics. In this series I will explain a few pillars of modern physics. I won't be using any complex maths. It is my hope that this series will introduce some of you brilliant, curious-minded laymen out there to the inner circles of Physics.
So, sit back and enjoy.


the Special Theory of Relativity.

We used to think that Light could slow down. It was a natural assumption: if the Earth was to move at 30 kilometres per seconds away from, say, the star Regulus, and if Light normally travels at 299,792.458 kilometres per seconds, then wouldn't it mean that light from Regulus should arrive slower to us, at (299,792.458 - 30) 299,762.458 kilometres per second?
Albert Michelson decided to put this to the test. In 1887 he devised a light speed detector - the most accurate light speed detector in his time - which got called the "Michelson-Morley Experiment". But, to his great surprise, the speed of light remained the same - regardless of Earth's motion. It goes without saying that Michelson was rather perplexed by the constancy of Light's speed.

Luckily, Albert Einstein was already working on his Special Theory of Relativity. It so happened that his theory explained (and still does) Michelson's failure.
The truth is, light speed remains the same, no matter the speed of the moving object. Since the speed of light is defined as the time interval it takes for Light to cross a distance interval, then the new moving frame changes the definition of "distance" and "time" so in the end, light ends up traveling the same amount of space-time intervals even when something moves.
Here's an analogy to explain Einstein's argument:

Imagine two very powerful light bulbs. One is blue and is placed on a space station some 1,200,000 kilometres from Earth. The other is red and it is placed on Earth. Suddenly, both emit a burst of their powerful light simultaneously at the same time.
Now imagine that you are on a spaceship. I'd personally favour a popular space-ship from a TV series featuring a certain captain Kirk, but any other spaceship will do.
Imagine you are parked just in-between the space station and the Earth. If you don't move relative to that position, you'll receive both blue and red light pulses simultaneously: 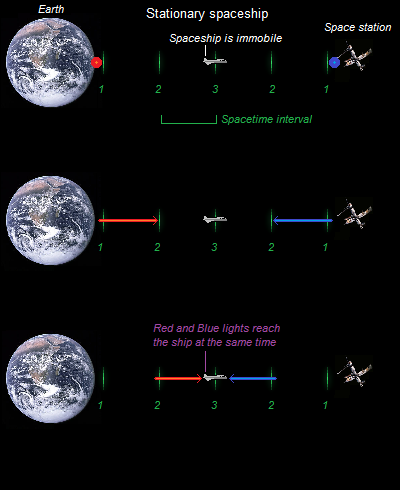 But what would happen if you decided to move and fly right at the space station, at the speed of, say, 1/2 c (1/2 the speed of light)?
Well, obviously, the space station's blue light pulse (the one you're going at) would reach you before the Earth's red light pulse (from which you're flying away). The two events won't be simultaneous anymore. Yet, this means that the two lights will come at you at different speed, right? But Michelson proved that light speed remained the same no matter what.
Einstein had to resolve this paradox.
Einstein speculated that when an object moves, it moves space-time along it - it generates it own space-time intervals frame (its own "Minkowski space"). Thus although the blue light does reach you first, it nevertheless traveled 3 of your moving space-time intervals. And although the red light does reach you last, it also traveled 3 of your space-time intervals. Since one space-time interval is here equal to 299,792.458 km (for space) and 1 second (for time), then, technically, both light rays covered 599584.916 km of warped space and 2 seconds of warped time before reaching you. In other words, they both traveled at exactly the speed of light (relative to you)!


On another note: Einstein also pointed out that you, in the moving ship, won't notice anything abnormal. Since you're not moving relative to your own frame's space-time intervals, then you see your ship as if it was perfectly stationary (that is, if such a thing was possible). 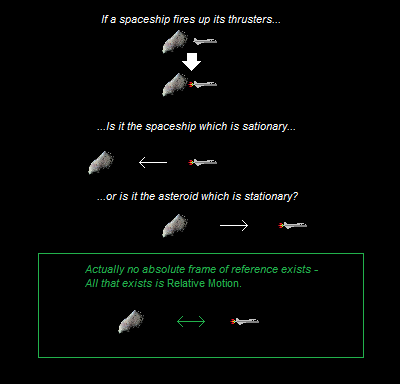 The relative movement between the two is the focus of Einstein's Special Relativity. Hence the name.


I hope you enjoyed this read; Part 3 will be coming soon, and will deal about Quantum Entanglement - a very popular aspect of modern physics.


Other part of the series:

I have a follow-up question that I can't seem to get my brain around.

In the frame of reference within the rail car, the switch is flipped, light from both bulbs reaches the center in precise simultaneity, and the explosion occurs destroying the rail car.

Which can it be? How are subsequent events that depend on precise simultaneity resolved within Special Relativity?

In your hypothetical you have posited 2 detectors, each with its own frame of space time reference - the photon detector inside the moving rail car and the stationary human observer. There is no real paradox. To more deeply understand the issue takes an in depth review of Lorenz-Fitzgerald transformations and an understanding of translations known as the Poincaré group. If you have the time, inclination, and a sufficient math background you might look at www.math.columbia.edu... Unfortunately, there is no CliffsNotes guide on the subject.

Good post. I like the part about relative motion. Though that just opens up more possibilities. The theory only pertains to two objects that are relative to each-other. But in space, everything is relative to each-other. What i mean is, everything we see in space is somehow being affected by some outside force already. Gravity mostly, but there are many other types of energies.
The asteroid thing would only be relative to only two objects existing each in their own space-time frames, but objects such as asteroids generally are in orbit around another object so the theory would not apply there.

originally posted by: Luuke123
The asteroid thing would only be relative to only two objects existing each in their own space-time frames, but objects such as asteroids generally are in orbit around another object so the theory would not apply there.

The theory still holds - it doesn't matter if the asteroid is moving (even if it's moving around something, aka, in orbit), as long as there is a motion between it and your ship, you'll experience the effect of Einstein's Special Theory of Relativity.

In the frame of reference within the rail car, the switch is flipped, light from both bulbs reaches the center in precise simultaneity, and the explosion occurs destroying the rail car.

Which can it be? How are subsequent events that depend on precise simultaneity resolved within Special Relativity?

posted on Jun, 8 2014 @ 01:40 PM
link
I know that's probably a silly question, but how did Einstein figured it out? How can you measure the relativity?

originally posted by: starheart
I know that's probably a silly question, but how did Einstein figured it out?


You mean, how he got inspired?

How can you measure the relativity?


Flying in a plane at high speed will make your on-board clock tick slower than the one "stationary" on Earth, and thusly this has been used as a measurement of Special Relativity's accuracy.