Recently, Obama just seized another 500,000 acres of land and declared it a "national monument". This time in New Mexico. This is the 11th national monument designated by President Obama, taking away more land each time. For comparison, President Clinton created 19 new monuments and enlarged three others, while President George W. Bush used his power under the Antiquities Act 5 times.

This means that no one can live on the lands they have taken and it will be closed to vehicles and construction.

If you want to know what's REALLY going on and why they're taking away all the land, take a look at this Agenda 21 population control map for the USA...

Agenda 21 is an action plan of the United Nations related to “sustainable development” and was an outcome of the United Nations Conference on Environment and Development held in Rio de Janeiro, Brazil, in 1992, where 178 governments (including the United States) voted to adopt the program. The number 21 refers to an agenda for the 21st Century. It is a comprehensive blueprint of action to be taken globally, nationally, and locally by organizations of the UN, governments, and major groups in every area in which humans directly affect the environment.

They are systematically corralling all of us into very small designated areas where we will be allowed to live. This is very real and it's happening to us right now. This is what our overlords have planned for us.

This is what the map says:

As Mandated by the Convention on Biological Diversity, The Wildlands Project, UN and US Man and Biosphere Program, and Various UN, US Heritage Programs, and NAFTA

RED: Core Reserves and Corridors – Little to no human use.

TURQUOISE: Normal Use Zones of Cooperation.

Some major highways and Interstate rivers are also shown.

Taken from the United Nations Convention on Biological Diversity Article ??,* United Nations Global Diversity Assessment Section 13.4.2.2.5. US Man and the Biosphere Strategic Plan. UN, US Heritage Corridor Program. “The Wildlands Project,” Wild Earth 1992. Also see Science “The High Cost of Biodiversity,” 25 June 1993 pp 1963 to ?? and the Border 21 Sidebar of NAFTA. The very high percentage of buffer zone in the West is due to the very high percentage of federal land. 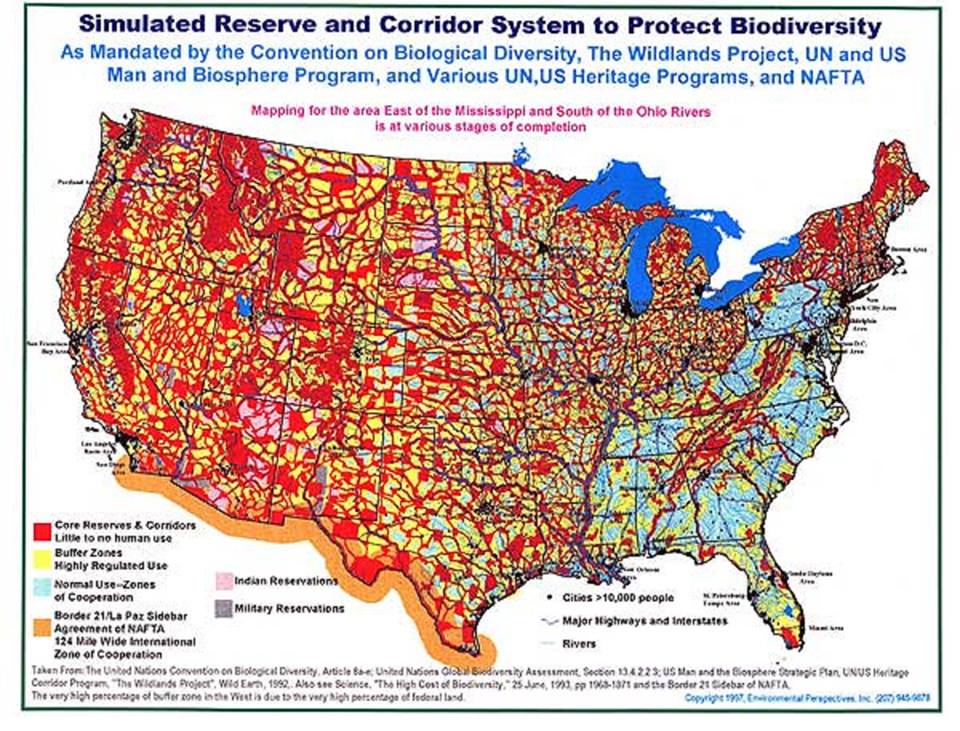 I totally agree this is all about Agenda 21.

What I find funny is that " We're " overpopulating the earth and how they can find all this extra land to keep " Us " out of.

But, that's the "Agenda" to keep us all down to a manageable level.

posted on Jun, 10 2014 @ 05:18 PM
link
Just to elaborate a little on this Agenda 21 "Plan" and I'm sorry to do this LrdRedhawk, but I like to pay attention to Prophecy and this will be pulled off through the United Nations, imho. Good thread and we all need to understand the "Game".

New World Order Coin 10 World Regions
This NWO silver coin they speak of in this video may be fake, according to internet articles.

It's the 10 Regions I'm focusing on. Just to clarify.

And also pay attention to this... It's Alex Jones ... and I don't care .. they're making way for infrastructure to manage Us.

The Rabbit Hole, as they say, is Deep

But then how can we explain that Bush wanted to sell off millions of acres of public land and forests, plus the BLM is always selling our public lands to the rich. Look up public land sells by government agencies like BLM.

What we did in places like Iraq I can see for depopulating as we took away the man who held the warring factions in check so they could slaughter one another.

Can't imagine they would bother keeping contracts of old with Indian reservations either.

Interesting though how the Government keeps taking public things and selling them, they make money, where does it all go. They sell logging rights before hand many times. Have it logged and then sell the land.


They sold to rich 100,000's acres friends of Bush for pennies on the dollar like this sale


The list includes 13,948 acres in Montana, most of them in national forests west of the Continental Divide.

The Bureau of Land Management (BLM), Redding Field Office, proposes to sell a parcel of public land totaling approximately 40 acres in Shasta County, California. The public land would be sold to John and Tina Dunlap for the appraised fair market value of $43,000.

BUSH PROPOSES TO SELL OFF $1 BILLION WORTH OF PUBLIC LANDS
www.monitor.net...

G,day mate. well done i wondered when this map and some of the info would find its way onto ATS.
GO, did a bit deeper your population level has been set and the number of cities you will be contained/restricted to has been set
down here in aussie the population has been set at a sustainable 6 million only and NO more
we are part of zone 4 it is also the first number on our bank cards, plastic money.
come to think of it our fiat money is plastic too. also srinks in a microwave
edit on 10-6-2014 by pronto because: wrong word

Sounds code for "Zone of death"?

What a joke... Not agenda 21 but their idea of genocide.

Whatever, we will all be better off after this temporary experience on earth.

Which reminds me, "give me liberty or give me death"

posted on Jun, 10 2014 @ 08:13 PM
link
There doesn't appear to be much more than 'thoughts' of being free left, and the government seems to be fast-tracking plans now.
The pace at which things are changing is nearly impossible to keep up with; we're facing corruption and injustice from many levels, and we're being overwhelmed.
I don't know enough about the progression of Nazi Germany to draw an accurate comparison, but what little I do know is striking a chord.....

posted on Jun, 10 2014 @ 08:41 PM
link
Ah yes the infamous Agenda 21 that skeptics say does not exist or even worse say is a good thing!! This is a conspiracy that truly give proof to how well they can openly orchestrate our complete enslavement without your technology/entertainment addicted masses ever batting an eye while screaming tinfoil hat to all who try to snap them out of their mesmerized state!!

Here's a link to a thread I started on this subject back in Oct. '13 Linky! I didn't get much response and I still don't know why!?!

We should be outraged!!!

Good luck with your thread, if it even wakes up one person to this situation, then you've done a good thing!

Detroit will be torn down cheap and turned into the first "sustainable development$ mega city.

look up detroit and sustainable development see what you find

posted on Jun, 11 2014 @ 01:23 PM
link
so if this "Agenda 21" is a Global initiative, what land-grabs, population shifts, movements and reclamation projects are currently ongoing in the rest of the world?

posted on Jun, 11 2014 @ 01:47 PM
link
people in this country own no land. At best we lease it. in that lease the government can evict us at any time for either eminent domain or in just a random federal land grab. We pay 100's of thousands of dollars to live in a house there. and once we pay the mortgage to live there in the first place we still have to pay protection money/rent/property tax to be able to continue to own it. owning land is a bis scam.

I feel your pain lol.

posted on Jun, 11 2014 @ 05:18 PM
link
Interesting to note...the areas designated for living (ie. the east coast) is also the area that scientist say will be flooded out with the rising of the oceans due to climate change. Do they believe humans are fish? Maybe they will control population by drowning large portions of the dislocated...just a thought.

posted on Jun, 12 2014 @ 05:51 PM
link
I love these "real reason" posts, because I know when I see something strange happening, eventually ATS will come up with the reason, or at least a very good theory.

This makes sense to me---the real reason they are buying up all this land.

I've got to tell you.... as I said in another post, I am having one of those "embarrassed to be human" days. Truly. It's almost painful today to read through ATS and see what's really going on in the world. The Home Page at ATS is chock full of stuff that sort of ties up loose ends---like Michael Hasting's death.

I think I should go read some poetry or something.

I really hope you're right about that---we'll be better off after leaving the earth when we die.

In the past few months I've sort of become numb to all of this----so much is happening and so quickly and yet, everyone I know is on FB sharing pictures of cats.

I think we're reaching a point of no return. All the NWO messengers like Wilcock and Fulford keep promising they see an end to this misery we call earthly life---and that things are going to get better soon and the NWO will be defeated.

But not at this rate. Nope, I think they're all delusional--these NWO messengers.

So, I've resolved myself to living in this miserable place and not seeing a lot of change, until, I hope, I get to the pearly gates.