The CIA, one of the world's most secretive organisations, became a little more public on Friday after joining social media site Twitter.

The spy agency's debut tweet revealed a cryptic sense of humour, slying saying it could neither confirm or deny it was the CIA's first tweet.

Despite only posting a single brief message, the account gained more than 160,000 followers in the first few hours.

Since any number of fake CIA twitter accounts have sprung up over the years, some caution was in order.

The agency, tweeting with the handle @CIA, quickly confirmed in a news release that it had, in fact, established a presence on both Twitter and Facebook.

It quickly followed 25 other accounts, including Homeland Security and NASA. 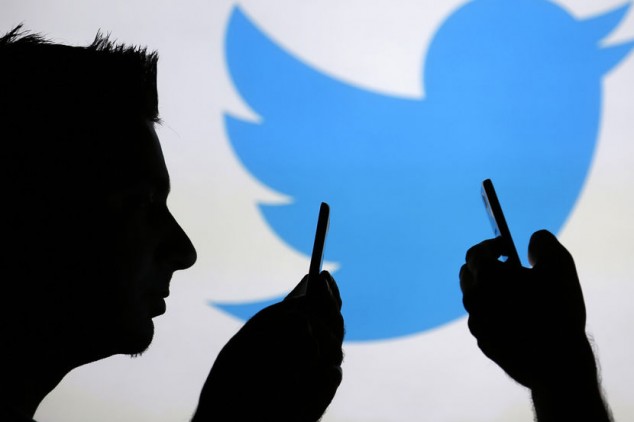 In an unlikely turn of events today, the Central Intelligence Agency announced that they were finally embracing the world of social media.

Yes, it is official – or at least that’s what they’ll have us think – the C.I.A. have joined both Twitter and Facebook.
Under the inconspicuous Twitter username @CIA their first tweet comes just a few days after the agency opened a Facebook page. 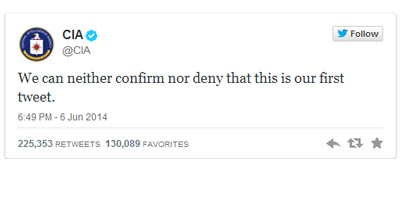 Some of the best comments on the subject… 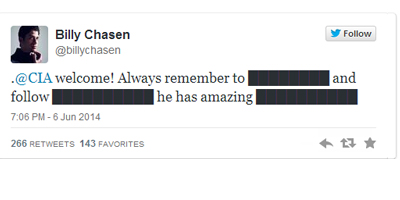 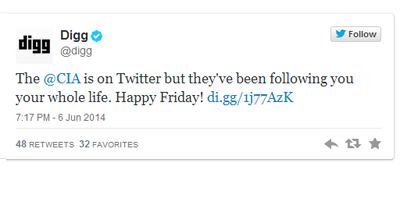 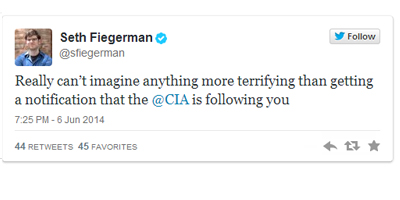 Actually maybe it's a secret. We all believe in conspiracies here. 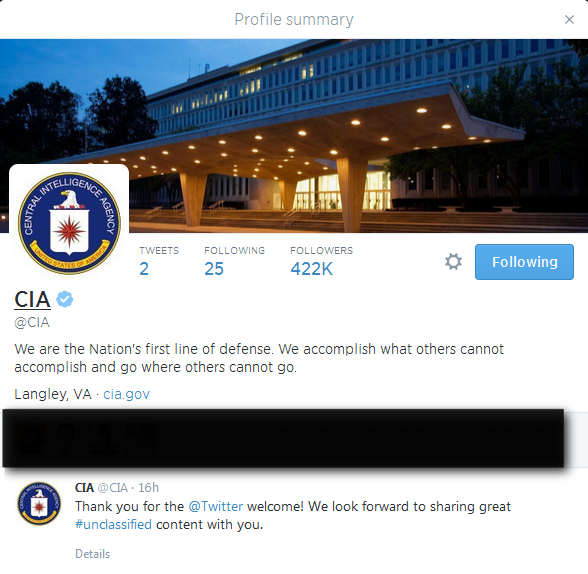 P.S. Is this a small gesture towards greater transparency or just another recruitment tool/public relations arm? 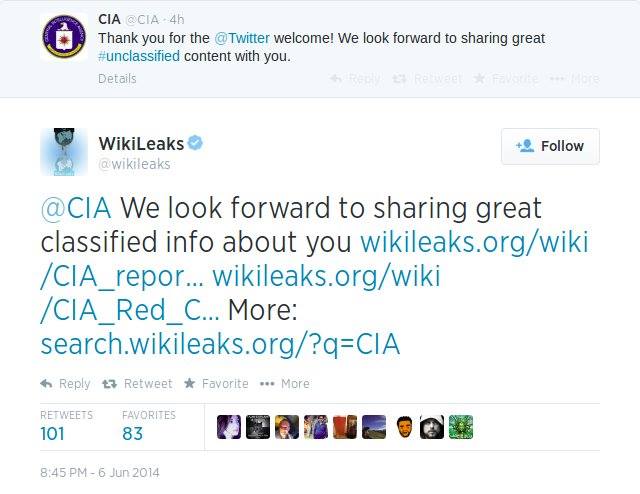 posted on Jun, 7 2014 @ 11:21 AM
link
I finally have a reason to start a FecesBook and Twatter account. Let the trolling begin.

Now we wait for the the inevitable seflies.

posted on Jun, 7 2014 @ 11:24 AM
link
This is a PR stunt, really, to get people comfortable with a "more open", "friendly" CIA, and an attempt to dissipate some of the rightly negative feelings towards them.

It will work, too.

Because most people are morons.

posted on Jun, 7 2014 @ 11:24 AM
link
I like how this is supposed to be inspiring or awesome when it's essentially an admission to infinite crimes:

Child raping cannibals do that to.

posted on Jun, 7 2014 @ 11:33 AM
link
Assuming this isn't just someone trolling, the disinformation floodgates have opened.

posted on Jun, 7 2014 @ 11:51 AM
link
When I first saw this thread I thought it was some kind of wind-up. It is actually real. The CIA are on Twitter. I'm sure they will get alot of interesting tweets from people wanting to know the truth. This could be the best Twitter acount ever opened.

posted on Jun, 7 2014 @ 01:03 PM
link
I wonder what genius in "the company" thought opening Twitter and FB accounts was a good idea or that it would work to make them seem more accessible or open? ("Hey, we're just like anyone else!" )

Maybe the NSA thought it would be a funny or ironic joke and persuaded their sibling into doing it.


....Or perhaps a time-saving way of adding people to their "list" if certain individuals write negative things towards them too much on Twitter or FB-- that way they can skip digging through the tons of data the NSA vacuums up and go right to putting a "red circle" around those people.
edit on 6/7/2014 by Chamberf=6 because: (no reason given)

posted on Jun, 7 2014 @ 02:59 PM
link
I don't find the CIA cute with their Facebook or Twitter BS. This is an attempt at public relations but it will fail miserably. Just read about some of the things that the CIA have done and does to this very day. Not an organization that I would call "friend" or want to have tweets with. If you climb in bed with the devil then..............
edit on 7-6-2014 by Fylgje because: (no reason given)

That is exactly the first thing that came to mind, people seems so "trilled", "exited" and happy with this news, in reality it means censorship, no so more secret spying and more open intimidation.

But as usual the agendas, tests and meddling on people's constitutional rights to privacy has been weaved by the citizens when they are dumb enough to post in any major social media site.

NSA, CIA, FBI and the government are not people's friend, at least the first three, the latest is actually the servants of the people or that is what used to be, now friendship is not part of their job description.


Yeah exactly. They are not doing this to be more socially acceptable with the people. They don't care about the people! They are doing it to get closer to the people but not in a nice way!

The 'Criminals In Action' or as per their South American name 'Cocaine Import Agency' are not exactly a people friendly and trusted organization. They are steeped in all sorts of criminal activity. Activity that has gotten us the Joe Blogg public killed!

To hell with the CIA. Stay the hell away from them!!

posted on Jun, 8 2014 @ 05:07 AM
link
Well send too many anti-cia tweets and your tweets on the subject will be blocked and anyone still thinking that twitter does not monitor PMs have never worked as a software developer and a database administrator.

Tiss pass time twitters real masters came out to laugh at us all.

Exactly, also its really rubbing it their faces too which is low~

posted on Jun, 8 2014 @ 09:45 AM
link
I agree, this show of "present" is to demonstrate to people that they are here among us, spying is not longer a secret, you better watch out what you are saying, because you are been monitored and they don't have to hide anymore, the law and the government is behind them and they are here to stay, so sheeple get used to the police state, corporate NSA, CIA and FBI sponsored patrols.

It sickens me the way that our constitutional rights has been eroding, but is ok, nothing is happening everything is just peachy.

BTW I mean waived no weaved, in last post, sorry about that. he, he.

posted on Jun, 8 2014 @ 12:44 PM
link
Regarding the thread title, that's old news indeed that the CIA would manipulate the public perception.