Bowe Bergdahl, the only American soldier held prisoner in Afghanistan, has been freed 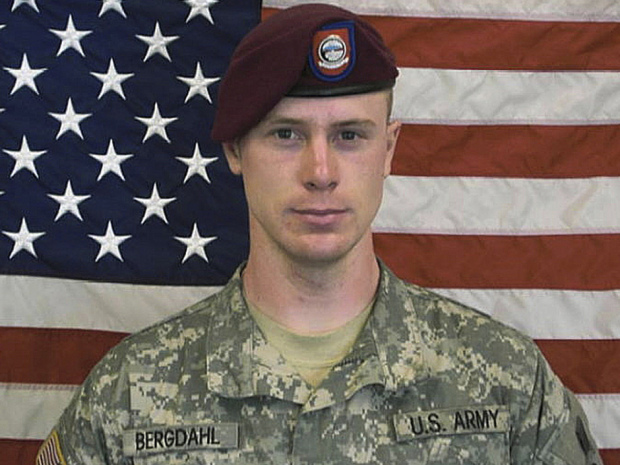 WASHINGTON — U.S. officials say the only American soldier held prisoner in Afghanistan has been freed and is in U.S. custody.

The officials say Sgt. Bowe Bergdahl’s release was part of a negotiation that includes the release of five Afghan detainees held in the U.S. prison at Guantanamo Bay, Cuba.

It's been 4 years since Sgt. Bergdahl was taken captive in Afghanistan, and now he is finally coming home to his family apparently. In my eyes, he has never been forgotten, and I've waited for the day until he was safely back in the United States. Not all news has to be dreary, sometimes it can be great, just like it is now.

Obama's statement on the release


Today the American people are pleased that we will be able to welcome home Sergeant Bowe Bergdahl, held captive for nearly five years. On behalf of the American people, I was honored to call his parents to express our joy that they can expect his safe return, mindful of their courage and sacrifice throughout this ordeal. Today we also remember the many troops held captive and whom remain missing or unaccounted for in America’s past wars. Sergeant Bergdahl’s recovery is a reminder of America’s unwavering commitment to leave no man or woman in uniform behind on the battlefield

posted on May, 31 2014 @ 12:06 PM
link
"Sergeant Bergdahl’s recovery is a reminder of America’s unwavering commitment to leave no man or woman in uniform behind on the battlefield!,


Well you left him behind for 5 years. what was the hold up if it was just about doing a swap.?
edit on 31-5-2014 by Soloprotocol because: (no reason given)

I am so very glad this has happened...I am thinking what must he have gone through? Being held captive since (June 30, 2009) that is not quite 5 years.

I hope and pray his healing is swift...he has been through a lot...he has endured much.

posted on May, 31 2014 @ 12:17 PM
link
At some point, I look forward to hearing more about the circumstances of his capture. However, this is a truly special and happy day for his family and those serious things can definitely wait.

It's nice to see a high point come from a war with so few of them.

The idea that we didn't know where he was is ludicrous to me.

A lot of people will be talking this minute about taking this guy for a ride....he needs his Family and loved ones with him like never before.
edit on 31-5-2014 by Soloprotocol because: (no reason given)

posted on May, 31 2014 @ 01:04 PM
link
Lol i dont see him as hero or anything like that, just another stupid young dude going to rich man wars and get cought while there, dont got no sympathy from me except hes family who had suffer mean while. Those who have to defend their country from these invadors get my sympathy!


That said, I am happy for him and his family...

Heres a twist on the story.

The following passage was posted on a gun forum (it may have been re-posted to other sites as well).

Its difficult to verify the validity of the post although quite a few of the forum members do know each other in real life. For example:

On July 2, two U.S. officials told The Associated Press the soldier had "just walked off" his base with three Afghans after his shift.

As more time passes we may learn the truth or we may get the typical BS from a government which has a well established history of lies and propaganda.

I apologize for its length as I need to post it in its entirety:

We were at OP Mest, Paktika Province, Afghanistan. It was a small outpost where B Co 1-501st INF (Airbone) ran operations out of, just an Infantry platoon and ANA counterparts there. The place was an Afghan graveyard.

Bergdahl had been acting a little strange, telling people he wanted to "walk the earth" and kept a little journal talking about how he was meant for better things. No one thought anything about it. He was a little “out there”.

Next morning he's gone. We search everywhere, and can't find him. He left his weapon, his kit, and other sensitive items. He only took some water, a compass and a knife. We find some afghan kids shortly after who saw an american walking north asking about where the taliban are. We get hits on our voice intercepter that Taliban has him, and we were close.

We come to realize that the kid deserted his post, snuck out of camp and sought out Taliban… to join them. We were in a defensive position at OP Mest, where your focus is to keep people out. He knew where the blind spots were to slip out and that's what he did. It was supposed to be a 4-day mission but turned into several months of active searching. Everyone was spun up to find this guy.

News outlets all over the country were putting out false information. It was hard to see, especially when we knew the truth about what happened and we lost good men trying to find him. PFC Matthew Michael Martinek, Staff Sgt. Kurt Robert Curtiss, SSG Clayton Bowen, PFC Morris Walker, SSG Michael Murphrey, 2LT Darryn Andrews, were all KIA from our unit who died looking for Bergdahl. Many others from various units were wounded or killed while actively looking for Bergdahl. Fighting Increased. IEDs and enemy ambushes increased.

The Taliban knew that we were looking for him in high numbers and our movements were predictable. Because of Bergdahl, more men were out in danger, and more attacks on friendly camps and positions were conducted while we were out looking for him.

His actions impacted the region more than anyone wants to admit. There is also no way to know what he told the Taliban: Our movements, locations, tactics, weak points on vehicles and other things for the enemy to exploit are just a few possibilities.

The Government knows full well that he deserted. It looks bad and is a good propaganda piece for the Taliban. They refuse to acknowledge it. Hell they even promoted him to Sergeant which makes me sick.

I feel for his family who only want their son/brother back. They don’t know the truth, or refuse to acknowledge it as well. What he did affected his family and his whole town back home, who don’t know the truth. Either way what matters is that good men died because of him. He has been lying on all those Taliban videos about everything since his “capture”.

If he ever returns, he should be tried under the UCMJ for being a deserter and judged for what he did. Bergdahl is not a hero, he is not a soldier or an Infantryman. He failed his brothers. Now, sons and daughters are growing up without their fathers who died for him and he will have to face that truth someday.

posted on May, 31 2014 @ 04:53 PM
link
This is a huge deal considering the idea of the US not negotiating with terrorists. Ever since the wars in Iraq and Afghanistan started you had two types of kidnappers. Criminal organizations who simply wanted money, and terrorist organizations like this one who simply wanted to execute people. The fact that they kept him alive so long is quite surprising, but I suspect they had long wanted to trade him.

Trading prisoners is usually something that is done between two nations who are at war. Al-Qaeda is labelled as a terrorist organization and therefore prisoner exchanges are negotiations, with terrorists. So does this represent some sort of shift in US foreign policy? I find that hard to believe personally.

Do I think it was the right thing to do? Absolutely. This is different from paying ransom for instance. I'm surprised the SF guys weren't tasked with securing the soldier and then eliminating those making the exchange. Heck, that could have happened, and we wouldn't know about it. They could have inserted a sniper team nearby perhaps. US soldiers can kill from a much longer distance than Al-Qaeda. But I don't know. Maybe the US felt that the 4 detainees were not a threat. I find it hard to believe they would release well-known or highly ranking members of Al-Qaeda. But I also find it hard to believe that this group would not ask for those specific prisoners.

"B Co 1-501st INF (Airbone)"
well i guess that would be a good place to start,,,asking questions,,sure hope its not true.
but it is not un heard of in combat, for some to lose it.

Out of the frying pan in to the fire.

originally posted by: Soloprotocol
"Sergeant Bergdahl’s recovery is a reminder of America’s unwavering commitment to leave no man or woman in uniform behind on the battlefield!,


Well you left him behind for 5 years. what was the hold up if it was just about doing a swap.?


Good job Obama , and its a nice gesture, but you wana show our military you wont leave them behind , HELP THE ONES AT HOME TOO!

Im happy this guy is going home, even tho he absconded while on duty and got himself caught.......

But what about all the other POW out there we dont "negotiate with terrorists" over?

Good job Obama , and its a nice gesture, but you wana show our military you wont leave them behind , HELP THE ONES AT HOME TOO! - See more at: www.abovetopsecret.com...

IF he 'cared' he would have sent Seal Team 6 after the guy instead of releasing 5 gitmo detainees.

People have soldiers blood on their hands, and will go right back to business of killing the 'infidels'.
edit on 31-5-2014 by neo96 because: (no reason given)