Colorado Landslide Cause is Fracking Operation, Not Just Heavy Rain

One person "Dutchsinse" spoiled Occidental Petroleum's day yesterday when he broke the cover-up wide-open on alternative media.
His website covers everything so I will make my comments short.


The three men had gone out to check instability issues.

posted on May, 28 2014 @ 01:28 PM
link
You made your comments very short. Can't watch the videos right now, as bandwidth is limited. I'd like to know more about what's going on here.

I hate fraking and think it is the worst thing we are doing to the planet at this time. However his claims are not based on science they are based on YouTube clicks.

He has yet to prove anything. No really, anything.

posted on May, 28 2014 @ 01:31 PM
link
Fracking could have been involved, but good luck proving it. This will probably go nowhere.

Just up the road from the big mudslide
we had a smaller one yesterday that closed Highway 6 over Loveland pass. 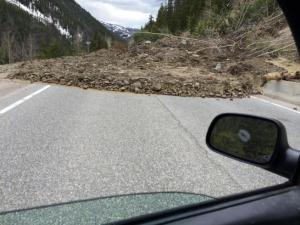 I doubt you'll have much luck with the fracking as the cause... these kinds of things happen all the time round here.
I will say we can expect more of these along with flooding what with temps in the 70's and 80's and a hell of a lot of snow melt-off that they say should equal the same as a 15 inch rain fall

Ironically the landslide area contains the only nearby FRACKING INJECTION WELL OPERATION.

Said author was also wrong about why the men were sent out there too.

But three people thought to be in the area have been missing since the slide hit. They went to check on their irrigation water because it had been cut off after an initial slide, according to the Mesa County Sheriff’s Office. While they were there, a second slide occurred.

The three have been identified by Mesa County as Danny Nichols, 24; his father, Clancy Nichols, 51; and Wes Hawkins, 46.

posted on May, 28 2014 @ 02:30 PM
link
Fracking was the first thing to come to mind for me. I've seen plenty of land slides over the years how ever. I think of the tv ads they played a while back. "What does fracking do for Colorado". And I think, "Well would you look at this".
But yes HardCorps is right, we see these all the time here. If you think about it, Colorado is a huge tourist site for hiking, camping, all those outdoor type of things. All the traffic causes erosion (like path ways on hiking trails), and eventually something is going to give. It's just seems to me that a 2 mile wide, 4 mile long, 250+feet deep in some places, is a bit much. So I'm on the fence here.

Something else to keep in mind...

that's a lot of earth between where the perfs---- holes that let oil flow back up the pipe--- the the ground we walk on!

that's 2.6515 miles of dirt between where your standing and where the fracking is going on.


Edit to add:
As a comparison of depth differences let me throw out the Carlsbad Sinkhole.


A giant sinkhole is threatening to swallow up a big chunk of town.

But engineers may be close to a solution.

The Albuquerque engineering firm, AMEC, has come up with five scenarios to deal with the 190-foot deep, man-made, salt-well cavern.

The firm tells the Carlsbad Current-Argus, options include filling in the cavern or keeping an eye on it to make sure it doesn’t take over the town, which could take years.

If you go there and type in Collbran, Colorado, where the OP link mentions? It shows the wells in the immediate area and anything else in the state for that matter. There are a lot in Colorado.

My daddy worked the rigs back in the 80's. Drilled most of the wells in them-thar-hills.
a lot of those wells were capped off too, held in reserve--- Waiting for the prices to go up before pumping--- or so I've been told by people who've spent their lives working the patch.

I just don't by the frack angle--- not here at least