posted on May, 27 2014 @ 06:04 AM
link
I thought about Fragile Earth for this, but then I got through reading it and ..umm..No. Earth didn't do this. Man did. No blaming the poor planet for a level of outright DUMB it takes people to think up and perpetuate in the middle of what is a dangerous drought condition for California.

SAN FRANCISCO (AP) — Call them the fortunate ones: Nearly 4,000 California companies, farms and others are allowed to use free water with little oversight when the state is so bone dry that deliveries to nearly everyone else have been severely slashed.

Their special status dates back to claims made more than a century ago when water was plentiful. But in the third year of a drought that has ravaged California, these "senior rights holders" dominated by corporations and agricultural concerns are not obliged to conserve water.

Nobody knows how much water they actually use, though it amounts to trillions of gallons each year, according to a review of their own reports by The Associated Press. Together, they hold more than half the rights to rivers and streams in California.

Now I can understand the needs of the people holding rights to the water claims here. I really can. However, on a site where corporations are certainly not considered people in other ways?

I think the most important detail for this would be that while we don't know HOW much water is being used as they note above?

That does not carry to knowing WHO uses the water without metering. In fact, the article details that a bit further down. (It's a long article on this one)

While much of the water reported by this group is consumed by people or farms, some of the biggest users generate hydroelectric power for profit then return that water to the river for use downstream. The state doesn't know how much is used for each purpose.

More than half of the 3,897 entities with active senior and riparian rights to water are corporations, such as the state's biggest utility, Pacific Gas & Electric Co. which creates hydroelectric power, and the Hearst Corp., which has water rights for its remote, Bavarian-style forest compound called Wyntoon.

Wyntoon? Anyway.... I think some balance needs to be sought when a state is literally running dry and reservoirs needed for drinking water to populations are well below 50% without much forecast for relief. Not at the inches they are short at this stage, to be sure.

What say ATS, I wonder? Do the rights of the few on a common resource like water out-weigh the needs of the many? Should it be the individuals and separate farms that benefit and not corps, or should all unmetered arrangements be ended?

posted on May, 27 2014 @ 07:00 AM
link
I think for large uses of water that comes from reserves, should be monitored simply so they know who is using how much.

I'm not talking about Joe Shmoe. I have a well pump and no one knows how much water I use, but then again I'm not farming or using the water on a industrial level. Nor do I live in a area that is in a drought situation.

I live in CA and have had to suffer from it a number of ways..

First they drain Folsom lake to "purge the rivers" ?? Then months later "Oops " no rainfall "sorry folks Folsom lake as hit a record low, we will be in a drought this summer" they say...

Fast faward here I am with a hole in my front yard because the county is installing new water meters...!!!!
Apparently they can be read via satellite.. ? What the ! I don't even..

The worst part about this whole thing is that the yearly salmon run is probably going to weak ....so that means salmon fishing in Sacramento is NAY!!!!

Its corporations not the people…

But since they own the media all we hear is how its our job to champion water use.

This story is an example of why I can't take the water conservation element of the environmentalist movement seriously. They tell us all to take shorter showers when 95% of all water usage is agricultural and corporate, supporting the wholly unnatural infrastructure necessary to maintain an artificially inflated population that has outgrown its land base.

Don't forget to turn off the tap while you're brushing...

originally posted by: NthOther
Do you really have to flush the toilet every time?

This story is an example of why I can't take the water conservation element of the environmentalist movement seriously. They tell us all to take shorter showers when 95% of all water usage is agricultural and corporate, supporting the wholly unnatural infrastructure necessary to maintain an artificially inflated population that has outgrown its land base.

Don't forget to turn off the tap while you're brushing...


Yes! Her indoors goes mad if I don't - and don't even ask about leaving the toilet lid down, or the seat up at night. Then I'm woken up by an bone-chilling scream
edit on 27-5-2014 by stormcell because: (no reason given)

Interestingly it may be an old claim from a century ago, but its pretty much what will happen as water and other resources become scarce due to the population explosion in certain areas of the country where habitation would have been impossible without the modern ways of support.

Wow.. I had totally missed the order to purge Folsom Lake for a river flush. What are they thinking?? Any time in the last several years, that brain fart would have had a particularly rank odor to it but recently? To do that, I almost DO start to wonder if those in office are ruining our system in some deliberate way. I need to look more into that... It sounds like quite a story in itself. 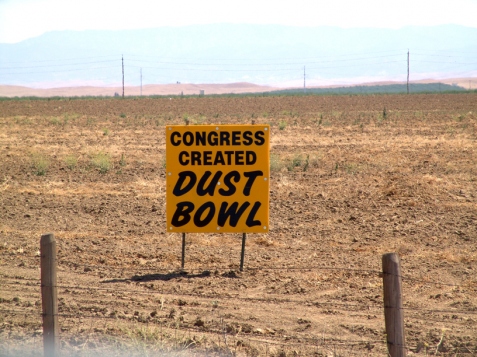 I was seeing those signs up and down the I-5 in the central valley well before I got off the road in 2010. They did too..all but the dust storms of the real thing, they pretty much created the opening stages of what nature now turned into a real, building, catastrophe.

The Perfect Storm, that required a generous helping of dumb mixed in for it all to happen quite this way.

There is always enough water for Soda's, beer and reconstituted juice.

Barely two years ago the gov declared the drought over, lifting restrictions. Since then all the water is gone? Seriously?

California grows rice, rice!!!!!! and that rice will get priority over all other personal usages of water.

In the most stunning and horrifying act put upon man the resources of Earth, something to be shared by all, are "owned" by a few and auctioned off to the highest bidder. If you can't pay, you will die of thirst because someone owns the water on the land and in the sky - someone owns water. Really meditate on that, as the idea that someone can "own" water is a bit bizarre.

More bizarre is how big corporations has taken over natural resources under the guise of "codex alimentarious" in the last decade to pursue their global profit agenda.

And while the roots are in the US and protected by our corporate government it expands globally.

The most dominant country behind the agenda of Codex is the United States whose sole purpose is to benefit multinational interests like Big Pharma, Big Agribusiness, Big Chema and the like. At the latest meeting in Geneva, the U.S. recently became the chair of Codex which will facilitate an exacerbation of the distortion of health freedom and will continue the promulgation of misinformation and lies about genetically modified organism (GMOs) and nutrients while fulfilling the tacit population control agenda. The reason the U.S. continues to dominate Codex is because other countries falsely believe the U.S. possesses the latest and greatest safety technology when it comes to food and hence, whatever the U.S. asks for, its allies (E.U., Argentina, Brazil, Canada, Mexico, Australia, Malaysia, Indonesia, Japan, Singapore) follow suit nearly every time.

Many of the countries who wish to participate and want to voice their opinions are not allowed to attend the Codex meetings as the U.S. denies most visas for these representatives whenever they feel like it.