"I was the NRA"...an observation on guns and gun ownership.

I was just interested in the flavour of debate that would come from this well-reasoned (to my foreign mind) essay.

The NRA has killed off the sportsman with their neglect and replaced him with the gun nut who spends more money on more guns, not out of a desire to feed his family, but to stave off a mythical jack-booted government bogeyman coming to take away those guns. I was the NRA

The United States owns more guns per resident, at around 0.89, than any other nation in the world. The U.S. has over 50% more firearms per capita than the next two highest nations, Serbia and Yemen at about 0.55 and three times as many as major European countries such as France and Germany. 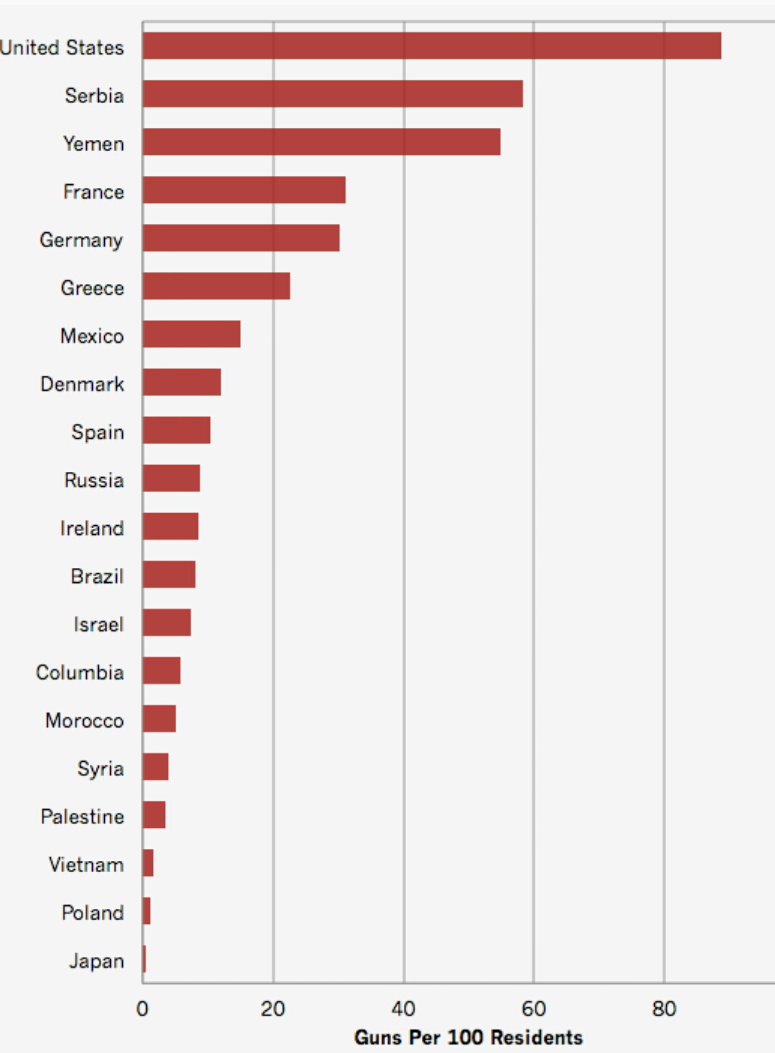 I've known many persons, many with families, that have no firearms. So is there a small group with a huge number of firearms? I also would think this is based on some sales/manufacturing numbers. Might be quite a bit a slack in the numbers.

I wonder what percent of the population is a gun owner? A lot of people who like firearms tend to have quite a few.
edit on 5/26/2014 by roadgravel because: (no reason given)

posted on May, 26 2014 @ 10:31 AM
link
Very good article and I can identify with much of what he said in it. Much of my childhood was spent just as the person that wrote the article spent his hunting when it was in season and fishing in the rest of the year. And like him I remember when the "city folks" came in and ruined hunting for those of us that lived in the country. The were extremely reckless with guns and would fire at anything that moved without thinking where the shot would go or to even make sure what they were shooting at. The only time you saw a person with a gun was because they were either going hunting or going in the woods to scout out to find a place to hunt. Snakes and wild dog packs were a problem and it wasn't smart to go into the woods unarmed because the dogs would attack you without thinking twice. Outside of that you never saw a person wearing a gun just to be wearing a gun.

originally posted by: TiedDestructor
Not even close

Depends who you talk to, so I gave no definitive figures.


The UN reported that Canada ranks third among the developed western countries (behind the United States and Norway) in the civilian ownership of firearms. Source


originally posted by: TiedDestructor
Not even close

Depends who you talk to, so I gave no definitive figures.


The UN reported that Canada ranks third among the developed western countries (behind the United States and Norway) in the civilian ownership of firearms. Source

Well use this it cites multiple sources.

rickymouse
+16 more
posted on May, 26 2014 @ 10:45 AM
link
I am a member of the NRA because I belong to a gun club. I am a sportsman, they have not changed my beliefs. Some in the NRA are radical but most of us are just trying to protect our rights to own firearms....for both hunting and protection against all kinds of animals...including bad humans.

We need to find a way to keep the guns out of the hands of the mentally deranged. This should be done on a local basis, not by the feds. Our people should work with the local police to take guns away from some problematic people and give the guns to their relatives till these people get straightened out. Or the cops could hold them till these people get help. This should be done before the people do something they will later regret and which will lead to hardship for their families.

I think self regulation at a community level is what should be done. Many of the people who have guns would help those in the community if something was to occur. They would assist their local police departments. This does not have to be a conflict, this needs to be a community effort to help to keep peace in the community. All people have to come on board with this so it will work, some families are all a little gun crazy, I used to know some like this, the stress they lived with caused them to die young, correcting the problem.

S&F. It doesn't matter how many guns we have in this country, it is the hands that they are in that is important. Take them out of the hands of the criminals and the people who have compromised thinking and that will solve some of the problems. This needs to be done on a family basis with the support of local community police. It does not need to be a permanent seizure either, when their thinking is returned to normal and the cause of this thinking is found, they may be able to get their guns back. Eating the wrong foods can compromise a persons mind, medicine is not necessary most times, personal dietary needs can help most times. Also the people that someone hangs around with can change mindset, following the wrong leader is not a good thing.

There is nothing wrong with most members of the NRA.

It's easy to deal with those who follow the law and logic, but those are not the ones who are the trouble.

Thats probably the only thing you e ever said on here that I can agree with. And boy do I have some stories of city folk thinkin theyre huntin

Anyway, on topic-
I will say that the "fear of a boogey man govt" isnt unfounded, and it wouldnt be wise to be lacadasical on the issue either.
Lets just say that obama, pelosi and others have been the most successful gun salesmen to date.
edit on 26-5-2014 by Chickensalad because: (no reason given)

That chart doesn't even list Canada and is contradicted even on the very Wiki page it's on, plus loads of other charts out there where Canada seems always in at least the top 10.

Very well said. And you made a great point about community involvement. We've lost sight of that as the years have gone by.

No one wants the burden of responsibility but someone still has to carry it.

originally posted by: ~Lucidity
a reply to: TiedDestructor

That chart doesn't even list Canada and is contradicted even on the very Wiki page it's on, plus loads of other charts out there where Canada seems always in the top 10.


I'm seeing them at position 12 and 13 on places that do. REGARDLESS...far far from what the op stated which was HIGHER than the US.

I think if anyone did an analysis of shootings and why they occurred, it certainly wouldn't be because the person felt that since they owned a gun they needed to murder with it.

The deed is the fault of the brain, not the tool. Crazy is as crazy does.

There is so much stupid in this article, its difficult to know where to begin but the last paragraph addresses most of the retardation.

And for many of you, the following information will be a surprise.

The NRA has killed off the sportsman with their neglect and replaced him with the gun nut who spends more money on more guns,...

Its obvious that the author's "knowledge" is based on media hype.

The NRA is a Judas goat organization that is in bed with the gun grabbers. They are there to present the illusion of conflict ie the Left/Right paradigm.

Fact is the NRA has HELPED to pass and even has even authored some of the most anti-freedom gun laws on the books. Everything from the NFA to the AWB.

NICS was invented BY the NRA.

...not out of a desire to feed his family, but to stave off a mythical jack-booted government bogeyman coming to take away those guns.

The 2nd Amendment's main purpose is to help protect everyone's inherent right of self protection, to be safe in your person.

The 2nd Amendment also serves as the nation's last line of defense against government tyranny.

It has ZERO to do with mother effing hunting.

There is no "mythical" jack-booted government boogeyman. Its a reality.

And yes, TPTB do want to confiscate guns. How do we know? Because every so often, they admit it. Not to mention that we SEE it happening right now in states like CA and CT where registration has led to confiscations.


This paranoid vision of America that the NRA sells is why we have the gun violence that we have today,...

The reason why there is so much violence in our society is because the government has led by example.

They have an open policy of glorifying war and violence. Everything from torture to a violent militarized police force. They glorify the killers ie snipers. They have shown us that they care nothing about peace and instead embrace violence as a solution, whether its invading countries over their natural resources or deploying small armies to collect "fees" from ranchers.

...because no sensible gun legislation can be passed...


There is already enough anti-gun/anti-freedom legislation.

Many of the laws have actually done an incredible amount of harm. Take "gun free" zones for example. Theres a reason why all but one multiple victim public shooting has taken place in a "gun free zone". The criminals realize that law-abiding citizens are prevented from defending themselves in these areas.

A more accurate name would be "victim disarmament zone".

As a matter of fact, there are way too many laws, rules and regulations in general. A person cant even jog across an intersection without being violently arrested.

And even if the NRA wasnt a Judas goat organization, these gun-grabbing clowns should take a moment to consider WHY organizations like the NRA have influence.

Its because they are a reflection of the PEOPLE.

People are scared of and no longer trust government.

Another US is bad because they like guns thread... oh joy.

Deny Arrogance
+4 more
posted on May, 26 2014 @ 12:10 PM
link
Cute propaganda from the blatantly biased raw story but the 2nd Amendment has absolutely nothing to do with hunting or sportsmanship.

The god given right to own a gun for hunting and protection was such a foregone conclusion it did not even bear mentioning in a constitution.

BlackboxInquiry
+3 more
posted on May, 26 2014 @ 12:33 PM
link
Our right to own them. With the numbers of firearms out there, the percentage of people who misuse/abuse them are a very small percentage.

originally posted by: SunnyDee
I think if anyone did an analysis of shootings and why they occurred, it certainly wouldn't be because the person felt that since they owned a gun they needed to murder with it.

Law enforcement may be an exception there.

True, sad, but true. there are exceptions obviously.

originally posted by: Swills
a reply to: TiedDestructor

Another US is bad because they like guns thread... oh joy.

Maybe you should have read the article. Nowhere in it does it say that the US is bad because of guns. It does however imply that some people shouldn't have guns because they don't know how to use them properly.