posted on May, 9 2014 @ 03:30 PM
link
If it's true we didn't go to the Moon then I would think NASA/USA would have to eventually stage the landings or who knows what would happen if the fraud was discovered. With other countries closing in on the truth they are running out of time to cover the lie if they really didn't go.

I don't think it would be that hard to stage a Moon landing using the AF as a secret cover.

Well except the minor fact that a lander stage wouldn't fit in the X-37 payload bay. The entire platform is barely bigger than a pickup truck, and the payload bay is only the size of a truck bed.

Could fit in this:
rocketry.files.wordpress.com...


Not to mention the slight problem of having enough fuel to leave Earth orbit.

originally posted by: grey580
a reply to: earth2


Maybe they did it to get their hands on the "billions of dollars". They'd go to war for far less than that!

originally posted by: Zaphod58
a reply to: earth2

Well except the minor fact that a lander stage wouldn't fit in the X-37 payload bay. The entire platform is barely bigger than a pickup truck, and the payload bay is only the size of a truck bed.

Ever since you schooled me on the size of the payload bay...I've been contemplating the use for it...what is your take on it since it orbits nine months at a time.

posted on May, 9 2014 @ 04:13 PM
link
While mystery surrounds the X-37B and its missions, amateur satellite spotters are piercing the veil a bit. For example, their observations suggest that the space plane is circling Earth at an altitude of about 218 miles (350 kilometers),

i think there's waaaay more to it though,

if the earth is like a box and all our knowledge of existence is based entirely on experience within that box...

the first ones who manage to peek outside- are they going to look back in on the rest of us and help us climb out, or are they just going to make a run for it?

"..there is no santa claus"

I would say most likely something to do with optics or crystals. If you can make a mirror for a laser, or a camera in space, you make make it much better than on earth, if done right. The same with crystals, they have fewer imperfections in space than they do on earth.

posted on May, 9 2014 @ 04:56 PM
link
So OK! Fffffffffff! Here we go again! The U.S. lands on the moon. Impossible do to the Van Allen belt...then Stanley Kubrick films the rest on a back lot in Nevada! Fracking genius! All the while Russia at the height of a cold war trying to dime out the U.S. of space travel fakery! Then claiming with photo's too! To have landed on the moon ( with a guy in a space suit! ).

Look folks! Humans were there. No matter how we choose to approach it again...we will do it again! Heck I was young and dumb once..5 others and myself pressed the "Take" button several times on the portable X-ray machine before we checked our X-ray exposure tags..... I'M STILL HERE AND HITTING THESE LETTER KEYS TO TELL YOU!
So I can't have kids! It does not mean I didn't press the button!

Edit: to the OP. This is not directed at you. You left it open...me being some what in a mood that's on guard. I'm tired of people walking in and saying NOOO! DEMONS! Not possible! We don't have that kind of technology!
Well....has anyone here seen what kind of tech first hand we have?

I'm stumped by this conspiracy, all wishful thinking and no common sense aloud

And diverted a lot of those billions onto the covert operations during the vietnam conflict, once that conflict was over (Due to a political shift at the very moment the US had actually won and had the cong on the run) the lunar money cow was no longer needed, at least half of the missions were real though but Armstrong could not even land the LAM on earth without crashing it.
Still someone put the mirrors out and though they reused shots to cover for non missions at least four of the missions were real.
A little hypnotherapy and '___' can go a long way to brainwashing someone into actually believing they went there.

posted on May, 10 2014 @ 03:15 AM
link
we will never know .... there wont be "another" manned mission beyond LEO in your lifetime....(that is officially acknowledged anyhow),, as far as the LRO pictures... that might as well be bigfoot... if a person wasn't aware of the "Apollo Moon landings" and you tried using that as proof that intelligent beings had landed there,,,they would laugh in your face.. ..

As far as the Russians are concerned,,, any disinfo-agent worth his weight knows if you fool your own population into thinking something then your enemy is more likely to think its true....and any enemy thats finds out secret info about their enemy dosen't just inform them that they know & will use it for other nefarious purposes...thats simple spy 101... but reguardless what others would have you believe the Russians/US exchanged ideas /tech even back during the apollo days & partied together
edit on 10-5-2014 by Hoaxster because: (no reason given)

now, i'm not saying that the landings were faked

the argument could be made that they were faked, for propaganda purposes.

you hafta remember that we were competing with communism (specifically at the the time, the USSR/CCCP)...we HAD to be better than them, no matter the cost. if we let them do something we couldn't do, that somehow meant we "lost"

so maybe we really did land on the moon, so we could say "hey russia, look what we did. suck it."

maybe we faked the whole damned things, so we could say "hey russia, look what we did. suck it."

i'd personally like to believe we went to the moon, but that doesn't entirely square with the step backward, that was the shuttle program, and everything that came after it.

whatever, it's interesting to discuss either way, isn't it? 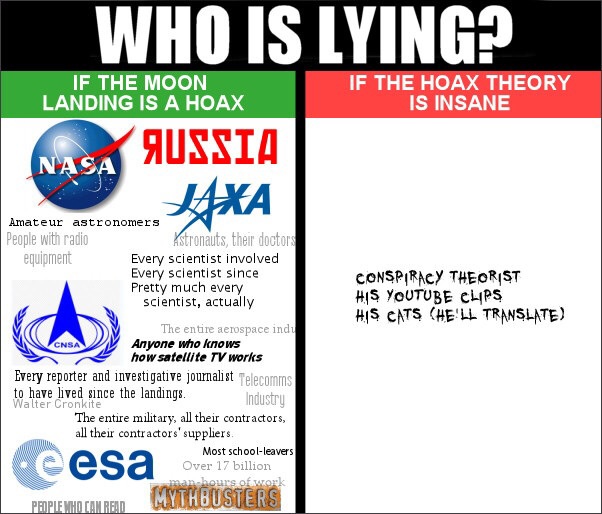 originally posted by: grey580
a reply to: earth2

Yeah cause the cost of staging"A Hoax"would be that much more difficult than actually going.But of course,plain common sense isn't a prerequisite for membership here.

You could get some of the lander into it, but to assemble it, you would have to have people involved.

This will give you an idea of the size of the X-37. To say it's tiny is almost an understatement.