‘You’re free in Sweden to be critical of immigration, those in power, or people identifying as “LBGT” — at least within the confines of your mind. But dare express those views, even on the Internet, and you can now be more easily prosecuted under a new law taking full effect after Christmas.

But Sweden’s new law adds another layer of hate-speech prohibition to the social ostracism. As Fria Tider (Free Times) reported (translated electronically from Swedish and then edited for grammar and word usage) in a piece entitled “New Law Makes it Easier to Prosecute Those Who Offend Immigrants or Those in Power,” “The crime of ‘insult’ will be prosecuted — but only for giving offense to immigrants, LGBTQ persons or authorities ...

This news comes straight after the pamphlet distributed in Brampton, a suburb of Toronto, Canada where a immigration watch group started giving away flyers with a depiction of what some have determined to be Hate Speech. This is raising the concern for the freedom of speech and that of expression.

Sweden goes to a more extreme level by criminalizing the internet speech.

posted on Apr, 29 2014 @ 10:07 AM
link
Some local newspapers have gone to a more extreme by labeling Sweden as Islamic Republic of Sweden and warning people that losing the right of speech are the first signs of a dictatorship, something that can turn Sweden similar to what USSR used to be.

This new law is meant to stop Swedish people from complaining about their country being turned into a third world nation.
Without freedom of speech there can be no democracy. If you are not allowed to say certain things then parties that support your ideas cannot exist and Sweden is at high risk of turning into a communist USSR-like country. 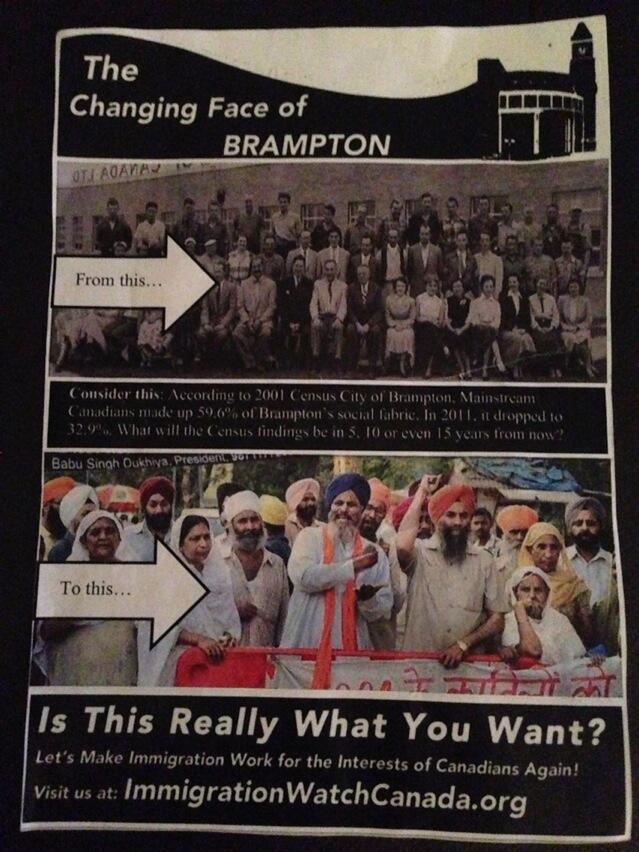 Looks like Sweden is trying to avoid a 'Swedish London'.

A law forbidding free speech in an European country is disgusting.

My opinion is that everyone is welcome to my country as long as they obey our laws and customs. If Muslims want to go by sharia law, then go in their own houses, if they feel offended on the streets by seeing a guy drinking a beer, or by a woman driving or anything that violates their stone age laws, then get out of my country or accept. If they refuse to comply, then they must suffer the consequences. This goes to anyone that wishes to impose his views, not just Muslims.

I think that the English folks are to afraid to do anything...

posted on Apr, 29 2014 @ 10:43 AM
link
sweden is far gone. and i'm not talking about the changing demographics - i personally don't give a crap if sweden or all of europe for that matter is completely brown in the next century. but these draconian restrictions on free speech are very disturbing to read about, i didn't actually think they would go this far

originally posted by: MeteoraXV
sweden is far gone. and i'm not talking about the changing demographics - i personally don't give a crap if sweden or all of europe for that matter is completely brown in the next century. but these draconian restrictions on free speech are very disturbing to read about, i didn't actually think they would go this far

The NWO overlords are strong in Sweden. They have a high rate of gun ownership there, so I don't know why they don't put a stop to it.

posted on Apr, 29 2014 @ 01:27 PM
link
a reply to: ScientiaFortisDefendit
oh i didn't know that. wow. hmm well i guess to me swedes don't seem like the type of people that would rebel against their mom, let alone their government
edit on 29-4-2014 by MeteoraXV because: (no reason given)


Most of all immigrants to the country are of European decent in some form or another. The Swedish only have about 15% total population that isn't directly from Sweden.

It's strange they would need such a law, when Sweden itself isn't a huge fan of allowing immigration to occur within their own borders in the first place.

posted on Apr, 29 2014 @ 02:14 PM
link
Nothing strange about it. The goal is to create a common, world enemy of the Muslims. Most of the 'immigration' is done by pencil pushers strategically distributing the displaced persons from bombed out homelands into areas which do not hate Muslims enough to keep the MIC and friends happy. A few strokes of the pen and our masters have the problem licked.

Soon everyone in the world will hate Muslims, which is, of course, the goal. You just aren't allowed to express it, or they'll arrest you, lest the spotlight of hatred turns in the proper direction.

Remember...we are not allowed to hate anything, thanks to these same masters.

Next, the masters propose another 'love war', since the whole world agrees that the Muslims did it, whatever it was, but, unable to use speech and other expressions of emotion, being bottled up, the war looks great on all sides. Who runs the media, again? I forget....

I don't think I'll ever forget two Christmases ago how certain members were thumping their tails all over the boards for a bombing and even nuking of Iran, as if it were the biggest box with the brightest bow to be opened for the holiday.

Of course, this means that the whole world will be in brimming adoration of these masters of deception.

But that is exactly their plan. Is it so hard to see?

It did say this though:

Since the early 1970s, immigration to Sweden has been mostly due to refugee migration and family reunification from countries in the Middle East and Latin America.[18]

posted on Apr, 29 2014 @ 02:34 PM
link
Hmmm somethin smells here..
Im IN sweden nau, and this is the FIRST
i hear about this new "LAW".....
I would GUESS that the "Tabloid"
Aftonbladet would have sunk thier
teeth in this at first glanse...
Nothing...Not so much as a PEEEEEEP

posted on Apr, 29 2014 @ 05:50 PM
link
I read somewhere the photo in the pamphlet is actually showing Sikhs, not muslims. I believe Hillary Clinton not long ago advocated a law against disparaging speech against muslims, in an earlier thread about Saudi Arabia and Sweden SA wants anti islamic speech banned.

Sweden has a particular loathsome group leading the country currently and has sold out that wonderful nation to immigrants who are raping their citizens left right and center.

Canada has a new problem with immigrants and crime rates, apparently our Government is also insane and this new 8% of the population, probably taken from the ruthless murdering groups in Africa and various areas, I don't believe for one minute our government is taking in real victims of the injustices, but most likely taking in the criminals, the ruthless murderers, or at least some of them. So suddenly this group is 8%. And now we have this unusual situation where there are foreigners, with accents, in the majority of public jobs ie, walmart tills and A & W, and supermarkets. And nearly every bank security personal, all foreign.

What the HELL IS GOING ON.

Criticize! Yeah and a lot more because its going to be accounted for.

We're not allowing a race displacement to take place, and any politicians involved need stiff jail terms themselves, nor do they get to write up laws to prohibit mentioning it, writing it online. PERIOD.