The last time the Russian "Doomsday Plane" was seen in the air, was on March 31, just days after the formerly Ukrainian region was annexed by the Kremlin. Until today, when over the past 4 hours, the Tu-214 has been ominously circling in position just shy of Finland and the Baltics, where as it is known, NATO has been depositing hundreds of western soldiers in a "defensive" build up.

A while back there was a thread here, with the buildup in Syria members really thought **** was about to hit the fan. A moderator here ( Zaphod ) said there are some tell's whether or not to take the situation serious. A number of pawns most be on the board before anything can happen.

One of the most crucial if not the most important pawn is better known as the doomsday plane. As the article mentioned, the last time a russian doomsday plane was seen was 31 of march. The day before the annexation of Cremea, since then it hasn't been seen.


America isn't the only superpower with a "Doomsday Plane" for its head of state. When Russian President Vladimir Putin needs to escape danger, he hops aboard this top-secret flying communications center.

A special missions variant of the Tupolev Tu-214 commercial transport aircraft, the Tu-214SR is Russia's answer to the US E-4B, an airborne command and control plane built specifically for the Russian president's use and considered successor to the Ilyushin Il-20 Coot, which has been in service for the better part of four decades. Produced by Aviastar SP and Kazan Aircraft Production Association, the twin-engine, long-endurance jet can carry 62 passengers with comparable range and speed to a Boeing 757. But unlike the Boeing, the Tu-214SR is packed to the gills with cutting-edge sensor and communications equipment.

The two such 214SRs entered service in 2008 with the Presidential Special Applications Squad and are operated by a crew of four. However, the plane was only declassified last year when it made its public debut at the Moscow Air Show. Since then, it's been spotted in the skies above both the Sochi Olympics, and more recently—and ominously—in Crimea. 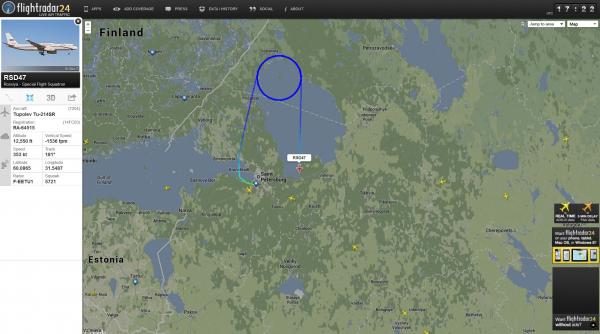 posted on Apr, 25 2014 @ 12:49 PM
link
Interesting development, thanks for sharing. If we go based on the last date the doomsday plane seen was the day before the Crimea invasion, then I guess it's safe to speculate that we are now a day away from Russia invading the southern and eastern parts of Ukraine. Who knows, but things keep seeming to heat up rather than cool down..
edit on 25-4-2014 by Wookiep because: (no reason given)

VERY INTERESTING. Lets hope its not a precursor to action but it probably is. Putin feels he is untouchable. So what if world opinion on him sucks, he has a strong death grip on his power in Russia an cares less what the rest of us think. He is not about to lose another chunk of border land to Nato.

Probably having a flight or two just to make sure it's working………..

Russia (and Mr Putin) are making lots of gestures and intimations however there is ALOT to lose if he / they really think they want a fight…….

Back to normal life for me im afraid….

What will they do?
More of the same, would be my guess.

I think the Secretary of State already told Putin what will happen. Basically nothing. He said that it would be very expensive for Russia if they invaded. I think he is referring to the fuel costs associated with driving tanks over the border into Ukraine?

VERY INTERESTING. Lets hope its not a precursor to action but it probably is. (obama) feels he is untouchable. So what if world opinion on him sucks, he has a strong death grip on his power in (America) an cares less what the rest of us think. - See more at: www.abovetopsecret.com...

Freedom is not the reason America meddles in other countries affairs. Nor is the motive world peace/safety. Saudi Arabia/ Kuwait/ Afghanistan should have taught us that.

I sometimes ponder who the 7 billion people on this planet would vote as the world's biggest terrorist? Who do the people think the biggest threat to world peace is?

posted on Apr, 25 2014 @ 01:20 PM
link
The Civil War that is about to go hot in the Ukraine is good enough excuse to test the systems in place.....perhaps they were doing comms checks and so forth to get the kinks out....
I am sure we will see much more blood in the near future....
The fact that NATO is getting antsy doesn't mean squat because the Russians will be able to hand the world a fait accomple" when they get their ducks in a row itll be far too late and well have to invade to get it back (if we ever had "it" in the first place....)
The curtain is about to rise people.....

posted on Apr, 25 2014 @ 01:21 PM
link
Ok.. feets on the ground people ! Tupolev airplane has been seen in Helsinki Vantaa before most likely multiple times too and it´s not one time occurence so what has this have to do with WW3 ? 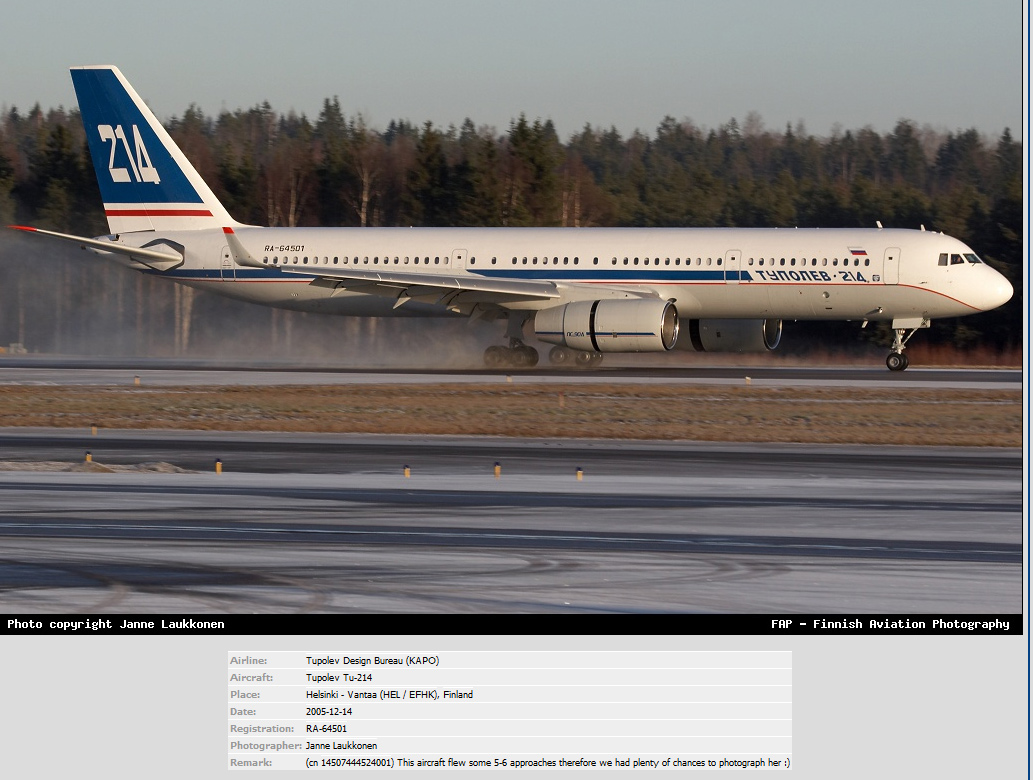 Did you even read the article? It's not really about where the plane has been in the past. It's about the most recent occurrence of the plane was the day before the Crimean annexation. Now it appeared again; a midst tensions this is something significant.
edit on thAmerica/Chicago425uk2014 by MessageforAll because: (no reason given)

Its an active plane..so why would that make any difference ?

Shy of ? really ? i would call this doomporn as that plane is not so rare sight on finnish airports.. why would we now shy off ?

Of course, the whole point of a Doomsday Machine is lost, if you keep it a secret! Why didn't you tell the world, eh?

And the whole point of these aircraft is *not* to be seen - if you can see them, you can kill them. If you were going to be worried about something like this, (I'm not), then detecting it flying over the heartland of Russia, with a phalanx of MiGs and Sukhoi interceptors flying continuous CAPs around it would be more worrisome ...

I understand what your saying and I partially agree, but with these tensions. And it seems there most be something happening :

While stocks have been fading every bounce so far - and credit markets are particularly weak - it seems the following headline sparked the most recent wave of selling:

*UKRAINE HAS INFORMATION THAT IT IS 'IN DANGER', LUBKIVSKY SAYS
*LUBKIVSKY SAYS INVASION IS POSSIBLE 'AT ANY MOMENT'
The Russell is the worst on the day but the Nasdaq is now at the day's lows, and all are negative for the week and April. 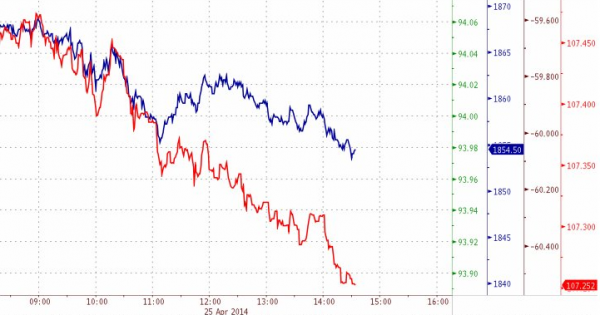 For now it is all speculation, as always. originally posted by: Wookiep
Interesting development, thanks for sharing. If we go based on the last date the doomsday plane seen was the day before the Crimea invasion, then I guess it's safe to speculate that we are now a day away from Russia invading the southern and eastern parts of Ukraine. Who knows, but things keep seeming to heat up rather than cool down..

I personally disagree. I do not think that this means an invasion of Ukraine is imminent by any means. The presence of such an aircraft, if it indeed is Russia's version of AF1, could be explained in other ways. And unless Putin or other high level individuals within the government and military are personally doing flyovers to get a sense of what they can see on the ground, which probably isn't much, I don't really see what is going on here.

It doesn't make sense to take these types of aircraft into potentially hostile regions, as that is the exact opposite of what they're designed for. I don't know why the plane was seen the first time, or this time, but I do not see how it could precede an invasion, as it doesn't do anything but shuttle and protect those in the government. Perhaps the reason it was seen before the Crimean invasion was because it was transporting certain individuals to some place nearby.

I know that FEMA uses some of the backup "doomsday planes" in the US for disaster control. They will use the planes as their headquarters and temporary base, so perhaps the plane was doing something of a similar nature in Crimea. Who knows really? I just don't think the appearance of the plane necessarily means an invasion is imminent. And even disregarding this incident, it is not likely that Russia will invade anyway, at least in my opinion. If I am wrong, I will go down rather hard, since I've been adamant in multiple threads that Russia will not invade, and war will not break out. We will see though.

what this person said.