I think the kid in the video looks like an alien. What's up with those eyebrow

that's what i was thinking, them are some damn thick eyebrows.

posted on Apr, 20 2014 @ 09:29 AM
link
I don't think the alien is blinking at all, it looks like shadowing artifacts from the movement of an alien mask stuffed with leaves and hanging from a tree. The movement is from wind and as it moves it creates different shadowing effects around the eyes making it appear like its blinking.
edit on 20-4-2014 by Rosinitiate because: (no reason given)

posted on Apr, 20 2014 @ 09:58 AM
link
Yeah.
Before I view a video of this nature, I click on the uploader to see the theme of their channel to determine if they are at all honest, or clowning around, or making a public service announcement.

He seems to be a hobbyist more than he is actually bringing anything to the table.

According to his uploaded videos, this alien visits him quite frequently?

posted on Apr, 20 2014 @ 09:58 AM
link
never seen a trail cam that zooms and moves.The eyes appear to be a window reflection.And why did they put the camera there to begin with? a reply to: Agartha

originally posted by: blkcwbyhat
never seen a trail cam that zooms and moves.The eyes appear to be a window reflection.And why did they put the camera there to begin with? a reply to: Agartha

I am not saying a camera that zooms in and moves, I am talking about cameras that go on standby and only record when there's animal movement.

But yes: why did he put a camera there? He doesn't explain, does he?

posted on Apr, 20 2014 @ 10:51 AM
link
a reply to: Spacespider
I think the floating eye's or orbs are hilarious, but I want to know how and why these people are filming this particular spot?
Whether it's real or not it's interesting and you can see reflection and blinking in the aliens eye's.

posted on Apr, 20 2014 @ 11:10 AM
link
I'm curious why the video ends as it does. Is the camera on a timer or is it activated by a motion sensor? Why do we not see whatever is being filmed leave?


These cameras have been running for years without capturing anything.. would you want to watch that to see it´s not staged for camera.

A comparison of what the area looks like without the supposed alien in it might be helpful.


originally posted by: tinner07
why edit it if its real?

Because you would not want to see 7 hours of nothing ?

How about some footage of when this thing first appeared. I hope you’re not suggesting that this thing has been sitting there for 7 hours. What, this alien doesn’t have anything better to do than sit near motionless in the woods playing peek-a-boo with a video camera for 7 hours?

originally posted by: AnteBellum
Why aren't these aliens ever doing anything?
They always seem to just be standing around looking at cameras, they must be lazy and stupid if you ask me!

I mean if you flew to another planet and came across a camera or video device would you just stand there and look at it?
I don't know maybe it's me, I would be looking for alien stuff to loot!

BTW how did the kid know to zoom into that exact area of the film? It is not like you can see anything before the zoom in, but he seems to magically know just where he needs to zoom to get the whatever it is.

originally posted by: Devino
When did it first appear, when did it leave and how long was it there for? If I had captured a real anomalous thing like this on video I would be interested in those questions. I would think that they would be intuitive for anyone. It does seem odd that this guy appears not interested in these basic questions.

This is a stupid request for everyone wants to see it just sitting there for 7 hours. Who would actually want to see the thing walk into the camera and then out of it?

BTW when he enhances the picture it looks more like this and a good reason why if it is anything it would just stay there, just blinking. 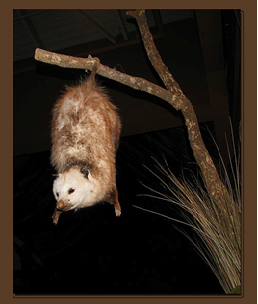 posted on Apr, 20 2014 @ 02:19 PM
link
You should pay attention to what loveguy was saying. The you tuber source has a raft of stuff on the same theme, and he's been at it for some time. The Alien in the grass sequence made it to ATS some time ago.

I vote "possum" is most likely...assuming it's not a bunch of malarkey.
Why would an advanced being from another planet traverse light-years to cop a squat in the boonies?
Maybe on a dare or a lost a bet?

posted on Apr, 20 2014 @ 05:49 PM
link
if you're going to make this rubbish and try to pass it off as real, please notify your subject to stop peeping from behind obstacles and looking straight into the camera lens of which it had no knowledge of its existence, this to me is totally fake and I wouldn't bother to splice the frames or enhance it to check it out, because it's not genuine. and I have other things to waste my valuable time on. what a pity there are people out there taking the mick with these false pranks. grow up.

posted on Apr, 20 2014 @ 07:17 PM
link
There is absolutely no way of knowing if this is real or a hoax. It is just impossible to determine based on video evidence alone. This goes for just about anything. There is always the possibility of a hoax, unfortunately. I am not convinced aliens are visiting earth in the first place, just to let you know where I am coming from. But with that said, here is what I think...

If it can be proven that these cameras have been running for a very long time without capturing anything, that is very good for establishing authenticity. If the person who is doing all this does not have any other sketchy videos, or has not been suspected of attempting to hoax in the past, then that adds to the credibility of what we're seeing. For instance, if you find a cool looking video on Youtube that says it shows an alien, but the user has created other videos apparently showing aliens, then a red flag should be raised.

Something like this would be so unlikely that a specific person probably wouldn't continuously capture such great evidence. Most UFO reports seem to be isolated events. This is just a guideline though, because it is not out of the realm of possibility that an alien would return to a specific location for some unknown reason, but come on guys, use your heads with something like that. Most hoaxers are repeat offenders, lol, which is good for being able to discern what is going on.

The fact that the eyes seem to blink is relatively impressive, as no movement at all would have looked highly suspicious. It also seems that the mouth is moving, but with all the movement from the wind, as well as the grainy quality of the footage, it is hard to tell if the mouth is actually moving or just appearing to move due to one of these factors.

As far as the game camera filming while the object is there, it depends on the type of camera. It is possible that either these cameras stay running all the time, or they turn on when movement trips them. Either of those explanations would suffice for this video. The creature was in front of the camera, although off to the side, which may be enough to turn the camera on.

There is likely some reason the camera was here to begin with. Either they were attempting to document strange happenings, they're looking for wildlife and accidentally captured this, or it is just part of a hoax. If it is a hoax, how would they have created the alien? I suppose it could be CGI. Using a model is definitely possible, but the movements didn't strike me as being all that mechanical. At least the eye movement didn't. It looked "somewhat natural." Although it could be a model. I doubt that it is a person in a mask, unless it were very well formed to the person's head, but it appears so short that it would have to be a child.

Again, there is absolutely no way to know whether the video depicts an actual extraterrestrial creature, so we just have to offer our best analyses and hope we're right. The way I see things, this could go either way. I don't think there is enough there on either side to swing my vote to one of them. If I were forced to answer, I would say that this is a hoax. That is more likely anyway, just because there are not all that many reports, out of the thousands of UFO reports, that describe aliens walking around in the woods. And I cannot imagine that such a race would get out of their spaceships to go walking around in the woods all that much. Considering how small they appear to be, one hungry bear could end it all for them in the blink of an alien eye...unless they have bear spray or ray guns, and in either case I wouldn't want to run into one of these guys.

Can't imagine why, if it were an alien, it would stand there looking straight into the camera for no apparent reason.

it seemed to be aware of the cam, tho, for whatever reason.

i thought it looked pretty good, the film that is.
cute little guy too.

posted on Apr, 21 2014 @ 10:44 AM
link
I noticed it in the first few seconds of the video and really hoped that wasn't what they were going to zoom into. Having dealt with my trail cams constantly, I am going to say that is probably a canine of some sort, or an opossum/racoon/skunk sitting on a stump or something. Most of the trail cams I have used and seen that have night vision like that have a bank of IR lights under the lens. When the camera is filming at night, its a small dull red glow in the area, which animals find fascinating. Mine are on timers, but I literally downloaded sever minutes of a cat sitting there staring at the camera over and over and over.

Do you mean Pareidolia?

posted on Apr, 24 2014 @ 04:54 AM
link
I have no problem believing that is a raccoon sitting in a hollow spot or depression in a tree. No need for fakery at all. When I see the zoomed image it could have come from my back yard. I've watched (with night vision) raccoons and possums sit in the hollow of a large tree and watch the house.
As for all the questions about his camera, placement, etc.---have you never heard of game cameras? You strap them on trees to see what sorts of critters are roaming about. Or you have them mounted on your home to keep an eye on things.
We've just had one installed in hopes of capturing some charming video of the fox family living at the edge of our yard. Who knows? Maybe we'll catch a lurking alien? But I can't think what we have that would interest an alien!