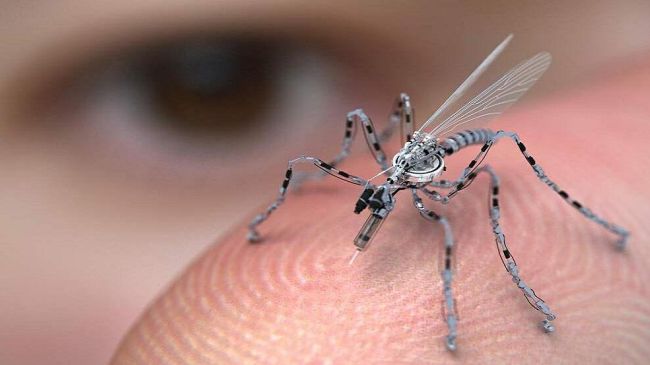 Reports indicate the US military has poured huge sums of money into surveillance drone miniaturization and is developing micro aircraft which now come in a swarm of bug-sized flying spies.


The robotic insect can effortlessly infiltrate urban areas, where dense concentrations of buildings and people, along with unpredictable winds and other obstacles make it impractical.

It can be controlled from a great distance and is equipped with a camera and a built-in microphone.

The new device has the capability to land precisely on human skin, use its super-micron sized needle to take DNA samples and fly off again at speed. All people feel is the pain of a mosquito bite without the burning sensation and the swelling of course.

The hard-to-detect surveillance drone can also inject a micro radio frequency identification (RFID) tracking device right under skin, and can be used to inject toxins into enemies during wars.


I've seen the other threads regarding this technology and the drones looked robotic and awkward, these DO NOT!
The fact that these could be in use will obviously set ones paranoia to overload, there is no way to keep these out of your personal space unless you have the appropriate jamming equipment to do so.

Quite interesting and very frightening.

You deny the authorities your blood sample, they simply wait until you're asleep, fly one of these into your room and boom, there goes your DNA.

I'm guessing if they can 'take blood' it can also 'deliver' a lethal dose if it wants to. I don't like this at all.

posted on Apr, 18 2014 @ 08:12 AM
link
a reply to: AnteBellum
I think that this is all we need to see to tell us that we have no way to avoid becoming the slave/drones of a totalitarian regime at some point....
Maybe even one led by machines, a' la the Terminator movie series storyline.

"I look up and I'm like, 'What the hell is that?'. They looked like dragonflies or little helicopters. But I mean, those are not insects." Bernard Crane, a lawyer who was at the same event, said he had "never seen anything like it in my life". He added: "They were large for dragonflies. I thought, 'Is that mechanical or is that alive?'"

The incident has similarities with an alleged sighting at the 2004 Republican National Convention in New York when one peace march participant described on the internet seeing "a jet-black dragonfly hovering about 10 feet off the ground, precisely in the middle of 7th Avenue". Entomologists suggest that the objects are indeed dragonflies. Jerry Louton, an expert at the National Museum of Natural History, said Washington was home to large, impressively-decorated dragonflies that "can knock your socks off".

However, he admitted that the dragonfly theory did not explain claims made independently by three people at the Washington event. They all described seeing a row of spheres the size of small berries attached along the tails of the "dragonflies".

Telegraph 2007
All the times any insect drones have been spotted they been used to
watch protests and the public so its not a good sign that they officially
letting us know the drones are real.
edit on 18/4/2014 by skuly because: i hate the new page size

I am having trouble pulling up that page at the Telegraph. It appears that their server is down. I wonder how deep TPTB have their claws in everything?

posted on Apr, 18 2014 @ 08:29 AM
link
Even that pic of the actual bug on a finger would still be a HUGE mosquito that would be noticed in a heartbeat if it landed on you. I can't imagine a swarm of these things going un-noticed in the air. If these are indeed used, my guess is we will start seeing many more pics of those they would be spying on wearing mosquito netting style faraday cage....that or clothing developed to mess with the electronics of these things.

I don't really see these being that effective in anything but corporate espionage cases really.

Is there a link that definitely specifies that he had made this?
It looks so different from the 'simple' other designs that had been created, it almost looks as if we are led to believe he created it. The article shows his work in the lower part of the thread and this picture up above sort of detached.
I am an amateur artist also and I can't understand why he wouldn't want recognition to such a crowning achievement in building this unless it's cgi. But his other works are not cgi either? Interesting.

Let me go look around for a bit. . .
1st Link I found attached to his name and picture:
Link to prison planet


The establishment released the info on this while at the same time releasing info calling it a hoax. Reason? To get people debating wether this is real or not instead why on earth the government is planning on releasing them on us.

There is no information that links this to the above artist who is very flamboyant about all his other creations!
But then again, there are no references to the link I posted either.
I am very skeptical of this one, for reasons I can't give at the moment.
Anyway, I'll keep looking until thread is gone.
edit on 4/18/2014 by AnteBellum because: (no reason given)

posted on Apr, 18 2014 @ 08:55 AM
link
As I recall, that is a CGI image that went with original article but was not a true representation of the state of the art. Plus, it has been on ATS here more than once before.

posted on Apr, 18 2014 @ 08:59 AM
link
That picture is almost certainly a stock photoshop image used whenever talking about this type of technology.

Thread title is kinda wrong calling it the "latest" surveillance technology since this was reported in 2012.

Anyways, heres one from Harvard with real pics.

posted on Apr, 18 2014 @ 09:03 AM
link
On Disney Jr. there is a show called Special Agent Oso. A ladybug drone flies around and video records children when they are in need of Oso's help. The video is sent back to Oso and he leaves his place to come help.

Yeah. I thought it was a cute show till I learned about it being for real.

I don't really see these being that effective in anything but corporate espionage cases really.


Flying it into an enemies stronghold for surveillance or carrying a small amount of C-4/high-tech high explosive and detonating it in an opposing Generals face? It wouldn't have to sit there long enough to be scrutinized, just fly right up to him and blam!

posted on Apr, 18 2014 @ 09:34 AM
link
Don't worry, the birds will take care of these. I bet the dragonflies will also help us. Make sure to take care of nature so the out of control parts of nature cannot take complete control.

Suppose it could end with the use of magnet traps?

originally posted by: QuantumDeath
a reply to: AnteBellum

Suppose it could end with the use of magnet traps?

It would have to BEGIN first, the OP pic is of an artist's concept. A strong gust of wind and down you'd go.

Because our bigger machines don't look as exotic as this micro bug, just how I knew.

I am still trying to find a link between the artist and the picture.
As I noted before this is not on his approved work list and he makes no mention of what would be a beautiful piece of art as flamboyant as he is. The only website listed shows the picture above his work, separate and not specifically included. I've looked at 20 website and can't find a link yet, if you have it please share it with me so we can put this one to bed.

I recall when that first showed up, it was used as the cover art for a magazine article.

Have you asked the guy?

PS - the claims from the OP article are purest bovine scat, if you're looking for corroboration of this being 'real' from it, it's not a great place to start.

eta: I can't find any reference to Savelich that DON'T involve the insect models.
edit on 18-4-2014 by Bedlam because: (no reason given)

Not at all claiming it to be real, there are some design issues I can even spot.
But as a leaked prototype to initiate funding or seed money, maybe.

I haven't spoken to him, but sent an e-mail his way. . . waiting!
I checked all of his work and ran it through the basic web searches and can't find a link. Other then a photo with his name on a file, there is nothing and his blog is loaded with stuff.

I find this even more interesting then the thread itself.

eta: I can't find any reference to Savelich that DON'T involve the insect models.