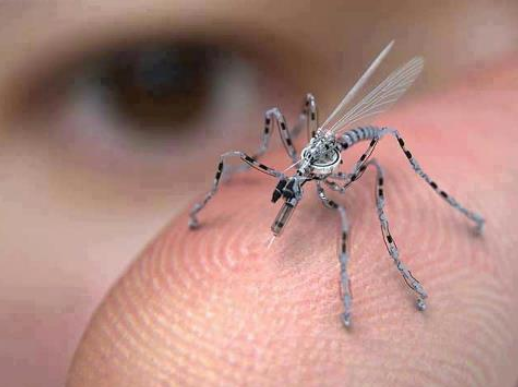 These things are in production. Thye can fly through windows, land on you, deposit some nanotechnology tracking systems, etc. They have a camera and a microphone. Do you think your local SWAT team (snicker) would like to deploy these guys?

Here's a linky to an article. As I understand it, these things are operational.

posted on Jun, 16 2012 @ 12:35 PM
link
can uthink of perverts getting there hands on these or even pedophiles.....some technology is just scary

our privacy is being taken away from us little by little

this is getting a little out of hand


I'm more frightened that the government developed and has access to these things. I highly doubt this will end up in the hands of perverts or pedophiles.

u think some technology is best left alone?

perhaps too much technology is bad

such as drinking too much water, or too much of everything pretty much is bad

u think some technology is best left alone?

perhaps too much technology is bad

such as drinking too much water, or too much of everything pretty much is bad


Oh, no, we can never have too much technofascism. Big things come in small packages.

That's why I am certain there is a hell. Heaven is uncertain, but hell....kinda hard to avoid.

It's a beautiful new day, and I'm going to spend it having FUN FUN FUN with all my friends

-the Book of Sabrina


u know the military does probably have some real ones though

thanks for clearing this up by the way


I don't see that particular pic in either source, and both articles say they are studying butterfly flight in order to design future insect robots. There is one pic of a Harvard prototype, but it is much larger, and it is just the wing-flapping mechanism.

I don't believe these are in production yet at all, not even all that close.

Ahh, I see another poster already found the artist responsible for the pic.

posted on Jun, 16 2012 @ 01:59 PM
link
Geeze what is the mater with people do they not think ahead to the negative aspect of these type things and see that the negative out weighs the benefits if this sort of tech...

I guess it is the mindset that they want to be able to wage war without risking getting hurt themselves. I am all for technology as it enhances our quality of life but how much is too much. I do not want to live in an orwellian nightmare where there is no privacy because of sh# like this ... Sigh

Makes one want to actually consider the benefits of an EMP to reboot things so to speak as this crap is getting ridiculous...

Originally posted by getreadyalready
reply to post by schuyler


I don't see that particular pic in either source, and both articles say they are studying butterfly flight in order to design future insect robots. There is one pic of a Harvard prototype, but it is much larger, and it is just the wing-flapping mechanism.

I don't believe these are in production yet at all, not even all that close.

Ahh, I see another poster already found the artist responsible for the pic.


Maybe not yet but they will be soon. I I read somewhere the military was already testing some ground based nanobots on the battlefield it won't be long before they have working models of flying ones if they don't already.

The are already working on edible nano technology in the name of curing disease however I think they will more likely use it to try and reprogram the brain eventually. Why not they already put all kinds of poisons in our food and water in the name of protecting us but it is really to make us docile and keep the pharmaceutical industry in business...

posted on Jun, 16 2012 @ 05:57 PM
link
I say ATS take some of the proceeds from their advertisements and buy one of those
things. Then have it fly into a Bilderberg meeting and live stream it...

posted on Jan, 30 2014 @ 11:12 PM
link
This is kind of freaky because just a couple months ago I was in my garage and I felt something bite me on the arm. I looked down, and what appeared to be a large mosquito flew away. Not really very out of the ordinary, but not only did the bite hurt instead of being numb like mosquito bites usually are, but I got a look at the thing as it flew away and it looked very metallic. It was a little bigger and definitely didn't look like a normal mosquito, although it seemed to have the same overall shape. Very similar to the picture in the OP.

I actually remember thinking that it looked like a tiny flying robot, but at the same time it definitely had a mosquito shape to it. This was before I saw these things online, although I knew they were probably being worked on. I instantly regretted not smacking it, but it was pretty quick, and by the time I realized it was odd, it was gone.

This is great, because now I'm thinking they've tagged me with something.

Then again, it could very well have been nothing, who knows.
edit on 30-1-2014 by JohnnySasaki because: (no reason given)

posted on Feb, 16 2014 @ 06:11 AM
link
I read about these things in the book of Revelation regarding end times prophecy.

posted on Feb, 18 2014 @ 09:18 PM
link
It would be extremely easy to make or buy a RF transmitter to jam these things and when they drop on the ground, you can pick them up or smash them up..
I doubt people would go to the trouble, unless these things became a real nuisance or a concern for privacy, which seems like a given anyways...

posted on Mar, 22 2014 @ 09:58 AM
link
If I see one of these sneaking around my house I'm finding some way to control it myself. How do they expect this to be able to fly outdoors, in front of a fan, or even near a window air conditioner? I think it's going to be awhile. Maybe we could use window air conditioners to trap them. They would stick in the filter or to the front of it (the part that sucks air in.) It would also be funny to see this fly in to a mosquito shocker.