Oarfish are more commonly found in open water at depths of up to 3,000ft, and can grow up to 36ft in length. this one in this photo is reported to be 15 feet in length. 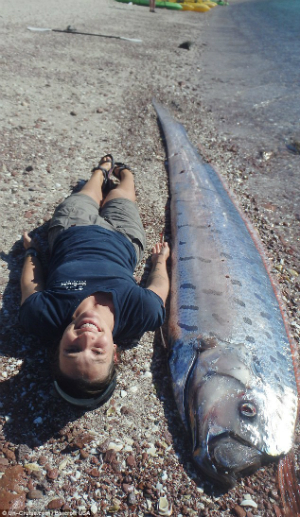 
Japanese legend says that oarfish appear at the surface and on beaches in anticipation of earthquakes, which may follow within weeks or months of their appearance. Although there does not appear any sound scientific basis for this legend, other than the natural human proclivity to perceive patterns, even where none exist, some still speculate on the possibility.

One leading hypothesis is that the deep sea fish, which can descend as far as 3,300 feet below the surface, are very sensitive to seismic disturbances. These disturbances, which could be the early signs of a pending earthquake, could disorient the fish, causing them to come to the surface where they are vulnerable to currents and waves. Oarfish are notoriously weak swimmers. 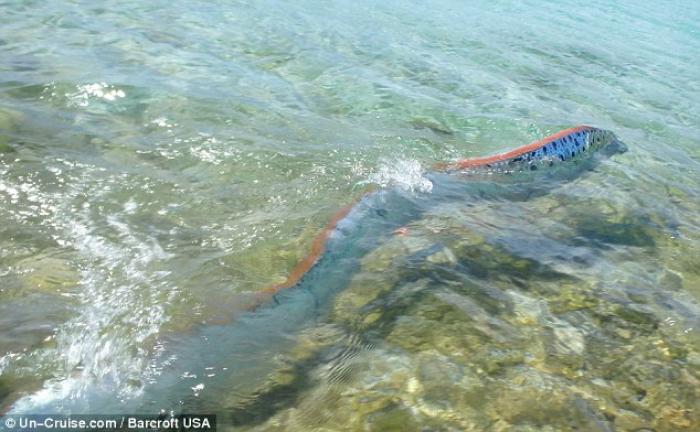 I guess we've all heard about animals doing strange things before an earthquake but this is my first time hearing about this fish? Yet I have heard of VLF ULF (Subsonic) sound waves occurring before an earthquake, so maybe that's messing up the fish. I've also read recently we can expect an El Nino this year, so made the fish are reacting to that?

Well I guess will have to wait and see? In the meantime anyone else up for Sushi???


Good story, and I'd S&F you except for the last line. It's not food, he or she is a fellow creature enjoying the sensory delights of the planet we all live on.

Well, okay, I'll star and flag ya. Maybe the fish are coming up and into the shallows because of ocean heating, because of the disturbances from the Japanese horrors, or other reasons. Hopefully earthquakes are last on their list.
edit on 11-4-2014 by Aleister because: (no reason given)


While writing this up I did a quick web search on some other predictors for earthquakes.
Fujita Research Report

one of those pre-event things was a reported Increased levels of radon gas.
Why that caught my attention is just last week here in Colorado we had a local news report about a sudden increase in radon gas levels here on the western slopes.

So now I'm wondering if there is a connection there too?
edit on 11-4-2014 by HardCorps because: (no reason given)

So THAT'S who's dating my ex now!

A five month precursor? That sort of leaves it open to wishful thinking, doesn't it?
edit on 4/11/2014 by Phage because: (no reason given)

posted on Apr, 11 2014 @ 12:51 PM
link
I don't know about an earthquake but these have to be the coolest looking fish out there, and massive! Kind of looks like the dragons in there ancient art

Since your ancestors left the sea to hang out on land. Have you heard how humans are harvesting sea life to depletion? Google it, and then look for some good rice and beans to cook with herbs and lemon juice. ummmmmmmm,


So, if something comes up and dies and is fresh ... I should just waste all that ready-to-eat protein to satisfy your sense of principle? I don't think so. Sorry.

Waste not; want not.


Eat away, but remember where the fish are coming from, the newly nuked Pacific Ocean. Yummmmm.


Nothing is good for you anymore. I might as well die/kill myself eating something I like instead of die/kill myself stressed over whether or not this or that component of my artificially and painfully limited and diet that doesn't really make me happy is toxic/not organic enough/not vegan enough/not earth friendly enough/GMO/irradiated/causes inflammation/is a carcinogen when combined with this or that genetic legacy/etc.

Life is too short to spend all that time trying to avert my impending doom in all the various ways I am supposed to.