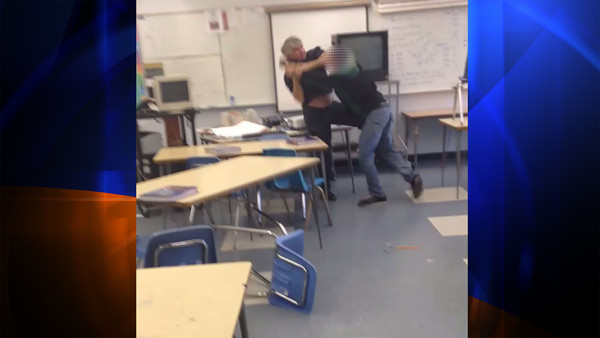 
On Tuesday, 18-year-old Santa Monica High School student Blair Moore pleaded not guilty to two counts of threatening a public school official, one count of possession of a box cutter and one count of possessing marijuana on school grounds. Until his April 22 pretrial hearing, Moore has been released on his own recognizance.

Unlike the student, teacher Mark Black – who is described by those who know him as a “kindhearted man” – has been placed on leave.

I don't know what I think about this yet. But our schools have somehow changed a bit from when I was there and not for the better. This teacher absolutely was wrong by trying to disarm the situation by himself and the way he did. Unfortunately the devil is often in the details, detail hidden from prying eyes, until one of us walks in his shoes and is faced with a box cutter wielding student.
In the end this is just another failure for US schools, actually two. More drugs and more violence in our schools!

Not the way I wanted to start my morning, as I just placed my first grader on the bus. . .

PS - I can't tell from the video if the box cutter is in his hand during the fight or before? If anybody can catch a frame please post. I don't think it will change my opinion but it is important.
edit on 4/9/2014 by AnteBellum because: add

posted on Apr, 9 2014 @ 07:55 AM
link
So the kid had a boxcutter and drugs on him in school. Love how the media the day before mentioned NOTHING about that and acted like the teacher just assaulted this kid. I hope the system throws the book at this kid and the school better step up and support a good teacher who is trying to make sure school is safe. Sorry, but where does a kid get off carrying a boxcutter to school....no good reason IMO....the kid was up to no good.

Sad state of affairs when parenting sucks so bad at home that a teacher has to step in and when that happens the teacher gets put on leave. This kid should be expelled and put in juvenile detention for a while. The teacher should be getting accolades, and the idiot students in the class that just sat there and filmed while doing nothing, well, there isn't enough time in the day for me to go on about this story. People are so caught up in themselves to care about others.

posted on Apr, 9 2014 @ 08:50 AM
link
Go Coach Mack! I can not sit here and speculate on everything that happened but I stand behind what the teacher did. It does not sound like he threw any punches and was detaining the student for selling drugs. If coach really wanted to hurt this kid there is no doubt in my mind he could have. He basically stuck to straight wrestling moves and was able to dominate this poor excuse for a human. Kids need to be held responsible for their actions and sometimes a good ole fashion ass whooping is what they need (even though he didn't get that here).

Also the other students should be doing everything they can to break the fight up but all they do is sit there playing with their phones. I'm sorry but our future is doooooooooooooooooooomed!!!!!


I seriously can't believe as I was posting this the other incident happened.
ATS Link

I worry about my kids future more and more these days.
When did high schools and military bases become the most dangerous places in the USA?


I didn't see a box cutter in the video but that doesn't mean there wasn't one.

I spend some time in Santa Monica every year and my first thought was that the teacher was probably justified but after watching the video and the interviews I'm leaning toward the student. I have no love for Santa Monica public officials but the only kids interviewed who were actually in the room at the time said that the teacher approached the student and tried to lay hands on him on the belief that the student had drugs on him, the stuff about dealing drugs in class came from students who weren't actually there. I think the district made the right call on this, the eyewitnesses said the teacher started it and if a teacher is going to be throwing down with a student he'd better have a very good reason not just a suspicion.

Having said all that, I wasn't there but even though I'm inclined to believe that Santa Monica is wrong...always...on this incident I'm not going to rush to judgment.

give the coach a raise and get that kid on the wrestling team.

posted on Apr, 9 2014 @ 10:09 AM
link
My question is this: would the teacher be dismissed from his job had he not done anything? Even if he reported this students' actions would they have not said to the teacher "and you didn't do anything about it?"
It seems this teacher was doing his job by protecting the other students and the school. This is just speculation on my part as the video only shows part of what happened and not the "how" or "why" which lead to the video struggle. It appears the teacher was only trying to restrain the student. From there it's all - he said, she said from witnesses, the student himself and the teacher.

Staroth
My question is this: would the teacher be dismissed from his job had he not done anything? Even if he reported this students' actions would they have not said to the teacher "and you didn't do anything about it?"

What action did the student take?

posted on Apr, 9 2014 @ 12:33 PM
link
It appears from the reports that two students are in custody over this altercation and it was involving an incident with drugs.


There is nothing in your source that backs your statement.


There is nothing in your source that backs your statement.


You mean other than these two quotes that are directly from my source? Can you read?


Some students said the altercation was sparked by a conflict over drugs.


Santa Monica police declined to comment on the incident, other than to say that two students were in custody in connection with the case.


Exactly. Pull a box cutter, get beat down. That teacher has a job in texas when he is ready to leave cali and reclaim his testicles

Nephalim
Probably going to go against the grain here...

give the coach a raise and get that kid on the wrestling team.

Every once in a blue moon I find a comment that is so good I have to say........Bravo. This is how the world used to be and it was a better world. Now with the progressive mindset entrenched it is hard to even think like this anymore.

All posters take a good hard look at what the world should be.............Thank you poster whoever you are. People like you should be leading the way with simple honest wisdom.


Are you kidding? Do I need to quote the ENTIRE article for you to see it? I will post a screenshot just to point out how poor your reading comprehension really is. Please point out where I stated anything about the students saying it was about drugs having been in the room....and please show your source where it states they were not in the room. 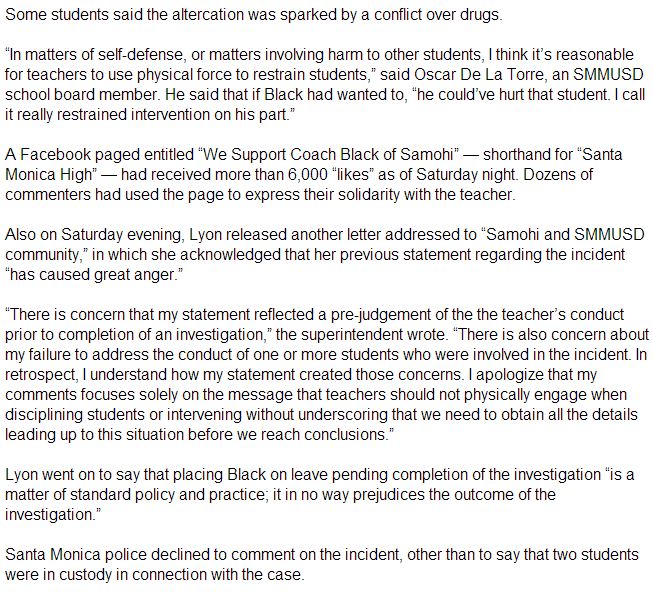 Now please read the VERY FIRST LINE and the VERY LAST LINE ....maybe read them twice just to make sure you understand the words......

So the two students in custody are just in custody for the fun of it I guess....LOL


Here...let me make it even more clear for you. Straight from Santa Monica:


Blair Moore, 18, is accused of, among other things, using violence as retaliation against a school employee who was attempting to carry out his duty. He’s also accused of possessing a razor blade and marijuana.


Two students were arrested — Moore and a 16-year-old male. The 16-year-old, against whom police are seeking a charge of battery against a school employee, will appear in court at least 60 days from his arrest on Friday. He is a resident of Santa Monica, according to police reports. He was released to his parents on the day of the incident.


Moore is also charged with two counts of threatening a school employee with the apparent ability to carry out that threat, according to court documents.

Clearly he had drugs, clearly there were two students involved and clearly he had a razor blade of some sort with the intent and ability to use it. This is coming from court documents. The kid was a thug and got what he deserved. Obviously we only got a short piece of video from the scene, not the entire event....plenty seems to have happened prior to the video we have seen.


Let me make it simple for you, since you're obviously a simple human being...the source in your post that I responded to didn't back your statements at all. Is that so hard to understand? Maybe for you it is but my Internet rule is...read things before you link to them. I know that that is hard for "some people" to do but you should try anyway. Reading is hard for some but you can do it if you really want to.


Let me make it simple for you, since you're obviously a simple human being...the source in your post that I responded to didn't back your statements at all. Is that so hard to understand? Maybe for you it is but my Internet rule is...read things before you link to them. I know that that is hard for "some people" to do but you should try anyway. Reading is hard for some but you can do it if you really want to.


Let me make it very plain for you. You made a statement in your post about the students not being in the classroom that said that drugs were involved with no source to back it up. I made a statement that students, regardless of in the class or not, stated that drugs were involved and posted my source which I quoted from and posted a screen shot from. I then posted an article straight from Santa Monica stating the charges against the kids in question which ALSO stated drugs, two students and a razor were in the court docs.

If by simple you mean I read and can understand I am. You are obviously ignorant and have no leg to stand on with your above statements of which you reference no source other than you have been to Santa Monica.....wow...so have a lot of people, including the reporters that I sourced in my last article pointing out how wrong you are. Reading is OBVIOUSLY hard for you, as is comprehension of what you read....and I have serious doubts that you could do it even if you wanted to.

Truly dumbfounded at this new level of idiocy and ignorance.....maybe there should be a vetting process for new ATS members.
edit on 4/9/14 by Vasa Croe because: (no reason given)