Texas couple claims to have caught a live ‘chupacabra’

So what do you think mythical beast or hairless raccoon?

posted on Apr, 3 2014 @ 02:00 PM
link
I wish the name chupacabra had never been used for these critters. There is clearly some kind of hairless canid running around the south and the stigma seems to cause any credible inquiry to balk. The lady who has the taxidermy one apparently had it DNA tested and it comes back some kind of mexican wolf-ish DNA, but not coyote or other known canid. Whatever it is seems to be real, but the last thing Fish and Wildlife want to do is discover a "rare" new species. It is the same reason they refuse to acknowledge cougar, wolves, and bears in states where they aren't "supposed to be". That is what happens when science meets politics. Hope this one get some attention.

Meh! Nuthin but a wild dog with serious mange. 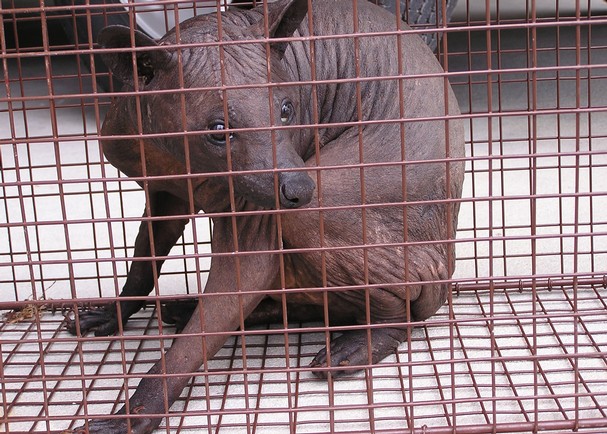 
Looks very similar to what I've seen before. Descriptions usually resemble a cross between a starved dog and a pig. A very ugly cross. And yes, the chupacabra is real. It's just not as exciting as the mythical version. Clearly, they're just animals.

posted on Apr, 3 2014 @ 02:04 PM
link
Looking at the button nose, and big black eyes, I"d say it is a hairless Racoon. Ive seen alot of coons on my land, and if you envision that face with hair, its a racoon


Crazy you say that, Ive seen a black cat, about the size of an adult lion jump out of the woods. No such thing as a Native black cat in North America. And actually it really didnt look like any black cat ive seen before.

We will also save Bigfoot, Yeti, The Loch Ness Monster, and honest politicians.*

*(we specialize in mythical creatures)


Poor mangy critter, I hope they took it to a vet.

Though I doubt the vet would have accepted chupacabra filled in on the admittance form.

beezzer
I would like to start the; "Save the Chupacabra" Foundation.

We will also save Bigfoot, Yeti, The Loch Ness Monster, and honest politicians.*

*(we specialize in mythical creatures)

What??? No save the bunny foundation...

Shame on you Beez...not thinking of your own.

The way they eat food without looking at it , i have only seen these actions in coons .

And the eyes the eyes...the Beady little black eyes lol


Bigfoot's gonna be really pissed, when he can't find his pet.

I wouldn't want to be that couple...


Reminds me.. I read recently where lots of animals who normally stay away from town and cities are now getting bold enough to wander around around with no fear of humans. This includes lots of dangerous animals and is happening all over the USA. We are still finding lots of new species and hybrid species of animals so something scary dog like in the woods doesn't surprise me in the least, in fact, I expect it.


Bigfoot's gonna be really pissed, when he can't find his pet.

I wouldn't want to be that couple...

Doesn't matter how pissed it gets, it'll listen to a shotgun or it won't be doing much of anything.


I don't understand how hairless animals ever came to be called Chupacabras. The chupacabras out of Puerto Rico are described as almost being alien-like so it's beyond me how two different species that are nothing a like whatsoever are both given the same name.
edit on 4/3/2014 by gemineye because: (no reason given)