posted on Mar, 11 2014 @ 01:02 AM
link
The supervolcano beneath the surface of Yellowstone National Park is 2.5 times larger than previously believed according to a study from the University of Utah


The supervolcano is part of what is known as a caldera, an underground volcano forming a shape like a cauldron. More accurate details about the caldera were discovered by measuring the seismic waves of the underground magma which is anywhere from 3 to 9 miles beneath the surface of the earth. The length of the caldera is 88.5 km (~50 miles) with a width of 29 km (~18 miles). The lead author of the study, Jamie Farrell, claims the quantity of lava in the supervolcano is enough to give rise to what would be among the top three eruptions over the past 2.1 million years.

Farrell is the lead author of a study presented at the American Geophysical Union Fall Meeting in San Francisco in December that determined the magma chamber beneath the Yellowstone caldera is 88 km long and 29 km wide, reaching depths up to 15 km
That makes it the largest imaged magma reservoir in the world

But is an eruption in the cards? No one really knows

“There may not be, but there probably will be. Of course, we don’t know when,” Farrell said

It was compared to the eruption of Mount St. Helens in 1980
During that eruption, there was a 80,000 ft. plume of volcanic ash that arose which was sufficient to pass through the troposphere and well into the stratosphere.
Now, multiply that by 2,000 times and that would be the impact of this supervolcano. Its volcanic ashes would wrap around the planet and mark a global event in size and damage.

It would make the 1816: Year with no Summer look like child's play
The cause of which was discovered years later, by the eruption of Mt.Tambora [Indonesia] in 1815

I saw a pretty cool video a day or two ago about the Great Plains of Africa. They were saying that only one type of tree was prevalent there due to ash deposits from previous volcanic activity.

I wonder how much impact That would have if Yellowstone erupted.

posted on Mar, 11 2014 @ 01:19 AM
link
And this and others is why mankind should be spending on food and water reserves to help in a planetary wide emergency rather than this continued incessant warfare.

If any of the super volcanoes erupts, the interruption to the food chain would easily send 90% of humans to their deaths via starvation and disease. IT WILL HAPPEN, we just don't know when. Tomorrow, next week, next year, next century - who knows.

Most humans will die, we are simply not prepared!


I saw a pretty cool video a day or two ago about the Great Plains of Africa. They were saying that only one type of tree was prevalent there due to ash deposits from previous volcanic activity.

I wonder how much impact That would have if Yellowstone erupted.


I'll have to check out the video you saw....sounds interesting

The impact that Yellowstone would have Globally would be devastating, if it ever erupts
Let's pray that it won't, or at least not in our life time


In 1815, they had thought the volcano, Mt. Tambora, was extinct --- but evidently it wasn't
The British gov. believed the 'booming' sounds to be cannonfire......


The true cause of "The Year Without Summer," as 1816 came to be known, lay half the world away on the island of Subawa, near Java in Indonesia.

Mount Tambora erupted in April 1815 with such force that the British governor of the area, Sir Thomas Stamford Raffles, dispatched troops to investigate the loud noises he believed to be cannonfire. Tambora was thought to be extinct, but the 1815 eruption ranks as one of the four strongest in the last 10,000 years.

It was roughly 100 times more powerful than Mount Saint Helens in 1980.

Within 24 hours, the ash cloud had grown to the size of Australia; Tambora produced enough ash to cover Vermont to a depth of 12 feet. As the streams of molten lava ploughed into the ocean, the force generated tsunami waves up to 15 feet high.

The rapidly cooling lava produced fields of floating pumice stone; some were three miles wide. Between 70,000 and 90,000 people died in Indonesia in the eruption and its aftermath, many from famine when the ash poisoned their crops.

This is why we need to constantly keep an eye out on ALL super volcanoes, even if they are deemed dormant/extinct
And yes, we had better be prepared in a SHTF scenario, although many people/animals would die in a situation like that 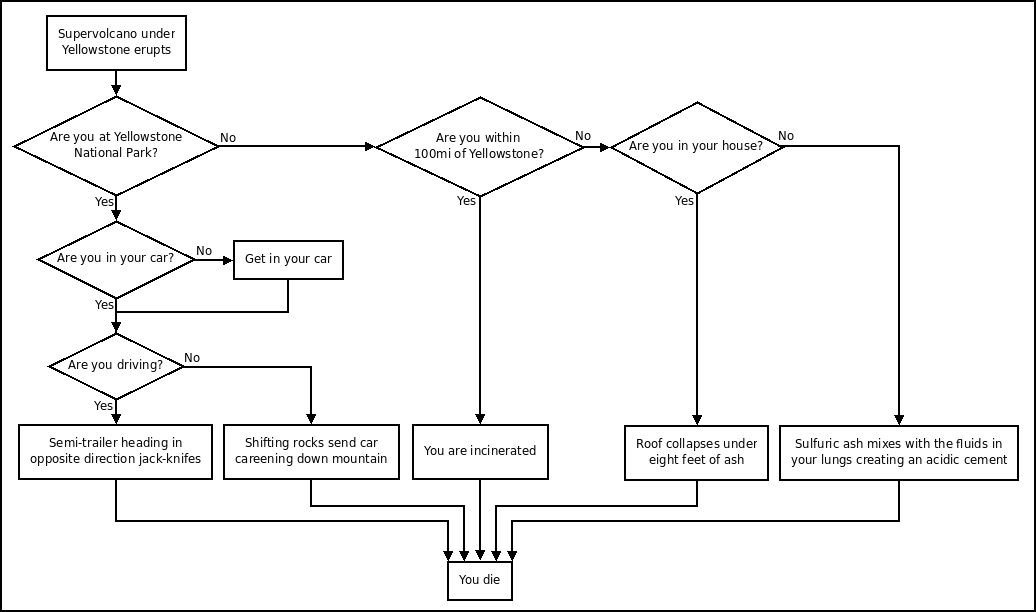 This is why we need to constantly keep an eye out on ALL super volcanoes, even if they are deemed dormant/extinct And yes, we had better be prepared in a SHTF scenario, although many people/animals would die in a situation like that

We are not prepared and I doubt we ever will be. We would need food for 7 Billion people for five years if one of these goes up. The quantities of food needed are simply staggering. It would take all of our spare resources to even begin to prepare. Sadly, our efforts go into weapons instead.

Only a single country in the whole world is actively trying to reduce population and most other people label China's efforts as barbaric. Perhaps, no, when it happens mankind will get a new beginning, if such an event does not start a new ice age.